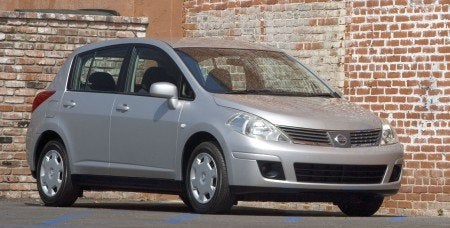 For 2007, Nissan redesigned the entry-level Sentra, making it bigger, sportier, and offering a wider range of trim levels from a base commuter model (base model) to the sporty Sentra SE-R and SE-R V-Spec. With the Sentra out of the way, Nissan introduced the Versa – an inexpensive subcompact with excellent fuel economy that was aimed directly at commuters that want a basic “Point A to Point B” car.

The Nissan Versa was not produced with enthusiasts in mind. If there’s anything I can say about this car is that it’s an absolute bore to drive. It’s bland, boring, vanilla…whatever you want to call it. But isn’t that the point?

The Versa was made when oil prices were rising out of control and the “vehicle to have” began to shift from big SUVs and trucks to small, efficient cars with a high MPG rating. People wanted a vehicle in which they could drive to work and back every day without spending $20/day in fuel costs. They didn’t care about how fun it is to drive, or how fast it go from 0-60 mph. Nissan, along with Toyota (Yaris) and Honda (Fit,) among other manufacturers, answered back with highly versatile compact cars with great fuel economy. Unfortunately for Nissan, the Yaris and Fit are also at least somewhat fun to drive. What Nissan has over its competitors in this class includes size, power, and price. The 2009 Nissan Versa Hatchback is roomier (and heavier) than the other compact hatchbacks – the EPA even classifies it as a midsize car – and it has plenty of leg and headroom for the driver and all passengers, although driver hiproom can be a bit narrow for some. The 1.8-liter 122 horsepower engine included is more powerful than the others, though doesn’t feel like it when driving. The engine gets 24 mpg in the city, and when you eventually get to highway speed, 32 mpg while cruising. A 107 hp 1.6-liter engine is also available in the base model Versa sedans, which I suspect is the same engine you’ll find in many go-karts.

The 4-speed automatic transmission, which was equipped on our test car, only added to the sleep-inducing nature of the car, and proved a bit of an annoyance. I can’t really put my finger on what I didn’t like about it, but I’m positive you’d be better off with the available CVT or manual transmission, even if they didn’t have the inherent fuel economy benefits. Inside, the barely-bolstered seats are soft, but provide no support when you’re turning a corner. Which reminds me – the 2009 Nissan Versa Hatchback has no resistance to body roll, so going around any turn faster than sluggish makes you feel like you’re about to flip the car, and going around any corner fast will result in the tires screaming bloody murder. Handling is otherwise fairly responsive and well-applied, making the car very easy to drive. 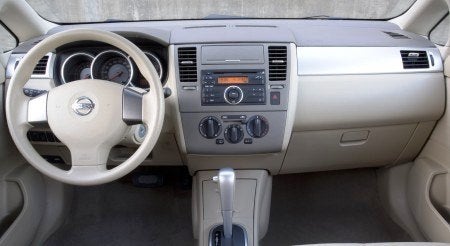 My biggest complaint about comfort in the 2009 Nissan Versa Hatchback is the high seating position for the driver. This is necessary for some, but for taller drivers it’s quite annoying. This could be easily fixed by having a vertical height adjustment on the seat, but sadly it’s not there. I would also like to have an MP3 player auxiliary jack, but it’s only available on the highest trim level, making it impossible to listen to any music other than CD or radio. Competitors have this feature, so should Nissan. Another major complaint is that ABS is a $250 option.

They did this to keep the cost down, of course, but in today’s cars, there’s no reason that ABS shouldn’t be a standard feature. They’ve included TPMS (tire pressure monitoring system) in every trim level, but no ABS?

Our 2009 Nissan Versa review model was a 1.8 S Hatchback, which starts at $13,990 and includes a 4-speed automatic transmission (6-speed manual optional,) A/C, single-disc CD player, and 60/40 split rear seats. The SL model adds a CVT transmission, power everything, remote keyless entry, MP3 auxiliary jack, cruise control, and bluetooth, and starts at $16,100. The 1.6-liter Sedan starts at $9,990, which Nissan touted as the least expensive new car on the American market, until the jerks over at Hyundai dropped the price of their entry level Accent to $9,970. So you can get into a Versa for a very low price, but you’re not going to get anything for it. A measly 107 hp engine is expected, along with a 5-speed manual transmission.

For that price, you’ll get 14-inch steel wheels, six airbags, Tire Pressure Monitoring, and all the air inside the cabin…that’s it. No ABS, no air conditioning, no audio system, no cruise control, no power accessories, no mirror in the visors – it’s strictly a budget choice. Not that there’s anything wrong with that, but once you choose the SL trim level and start to add on some options, you get into a higher class price range.

It may sound like I’m bashing everything about this car, but it’s really not that bad. Other than the details listed above that I didn’t like and the fact that it’s incredibly boring, it’s not supposed to impress car enthusiasts like me. It does its job, and it does it well, which is to inexpensively get you from point A to point B everyday in reasonable comfort. If that’s the type of car you need, give the 2009 Nissan Versa a look. Also be sure to look at the Toyota Yaris and Honda Fit, as they will each have something unique about them and might fit your needs better.