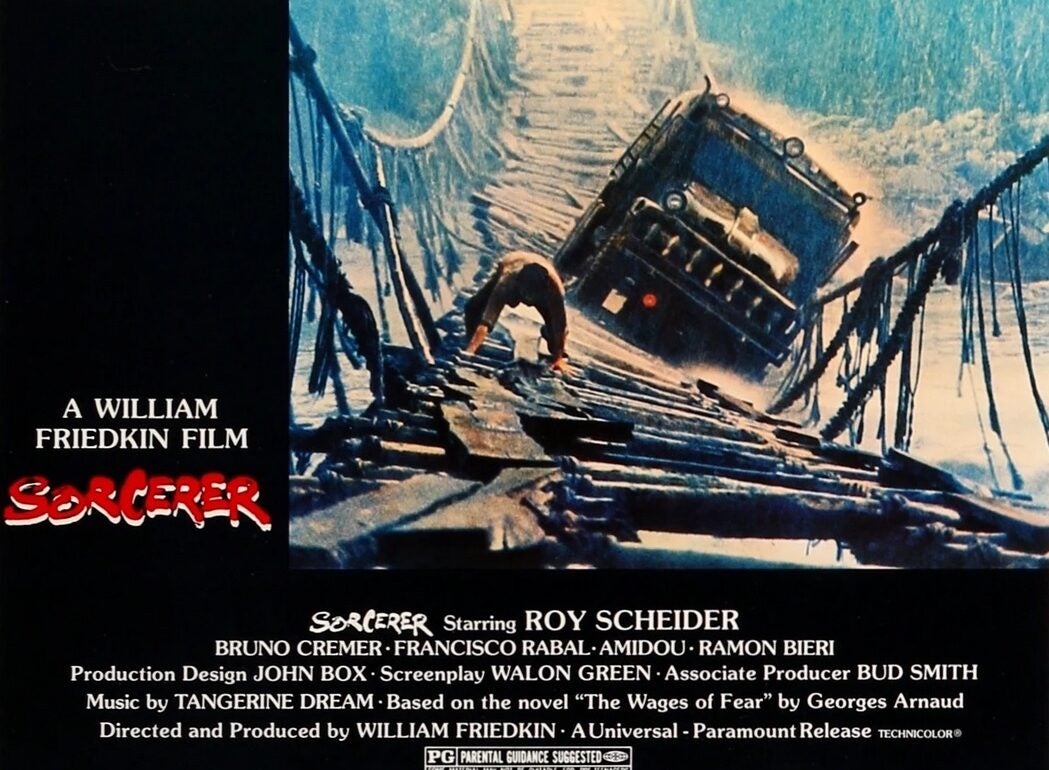 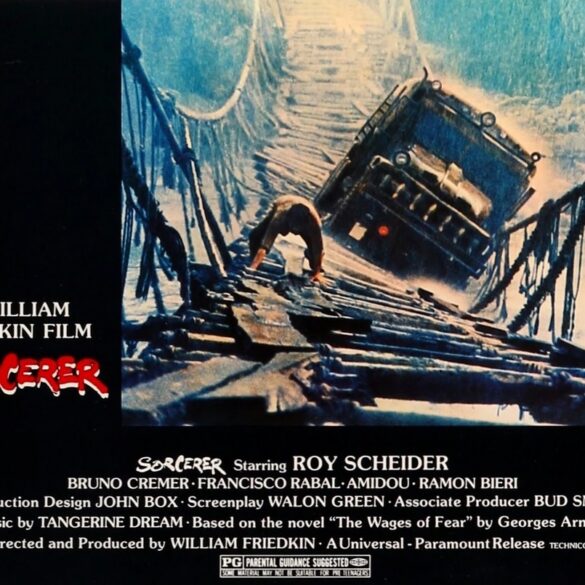 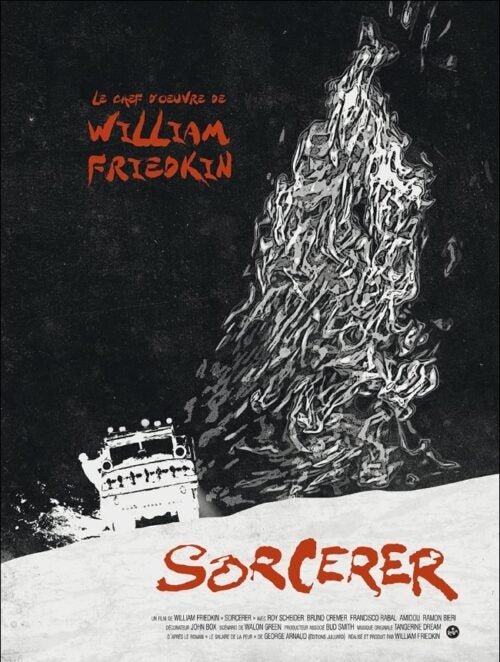 You watch something like Sorcerer, and you keep telling yourself, “That wasn’t CGI, and that wasn’t special effects. They just did that with a truck!” From that perspective alone, William Friedkin’s 1977 thriller is one that continues to fascinate us gearheads, but it’s also a good movie in and of itself and nail-biting fun for everyone.

From Prologue to Porvenir

Sorcerer starts with four vignettes introducing the main characters: Nilo (Francisco Rabal), an elegantly dressed assassin who kills a man somewhere in Latin America. In Israel, Kassem (Hamidou Benmessaoud, best known as Amidou) is a terrorist who commits a bombing while in Paris, France. Victor Manzon (Bruno Cremer) is accused of fraud by the president of the Paris Stock Exchange. Meanwhile, in Elizabeth, New Jersey, an Irish gang robs a Catholic church connected with a rival Italian Mafia crew. During the getaway, the driver, Jackie Scanlon (Roy Scheider), crashes but manages to escape.

After these criminal endeavors, each is wanted by the authorities and the mob. They are all men of duplicitous character that have backed themselves into a corner. The only answer is to run. Run far away to where you will never be found. But if you run far enough, you will land on the outskirts of society with no way back.

Such is the conundrum our characters find themselves in. They now all live under assumed names in the far-flung Columbian mining camp of Porvenir. Their situations are desperate with abysmal poverty and treacherous working conditions. Even the flight out of Porvenir takes more money than they make in a year. The lives they have chosen have led to this. Then, BOOM, there’s a wellhead explosion!

The only way out of this jam is the good old fashion way: You gotta dynamite the wellhead and extinguish the fire. That’s the easy part, but, of course, there are problems. The first is that the dynamite is old and leaking nitroglycerin badly. Second problem? The dynamite is 200 miles on the other side of a mountain range. Oh, and the “roads” are suicidal.

So the deal, as put forth by the mining chief, is this: “We’ll pick four of you to drive. You can put together your trucks however you like, but you have to get the dynamite from here in Porvenir, over the mountains, and to the well site. Do that one job, and we’ll pay you the equivalent of 10 years’ wages and get you Columbian passports.”

The Motley Crew of Sorcerer

Roy Scheider plays Jackie Scanlon / Juan Dominguez, and he’s perfect for this role. If not Scheider, then who else? They wanted Steve McQueen (who would have worked), but Scheider has that perfect hang-dog look and affect about him. Just watch him wash his face in the dirty water of Porvenir and stare out across the jungle, and you can see he’s at the end of his rope. Roy Scheider is a national treasure. Screenwriter Walon Green described Scheider as “believable, gutsy, and most important, desperately human.” Desperate is right!

Bruno Cremer is Victor Manzon / Serrano. This was Cremer’s first English-speaking role as the crooked investment banker from Paris. Cremer speaks French, English, and German, and throughout the film, he is aloof, industrious, haunted, yet principled. You know, a typical French guy. Also, since he’s an investment banker, he’s good at negotiating the deal they all take for driving the trucks.

Kassem / Martinez is played by Amidou, a politically inspired Arab bomber and terrorist. Amidou was young when he took this role and displays the submerged innocence of terrorists with something to prove at that age. Amidou is a recognizable figure. He worked in a number of French movies and, coincidentally, was in Ronin (directed by John Frankenheimer, who also made Grand Prix).

Francisco Rabal is Nilo, the enigmatic Mexican professional assassin. Detached and imposing, everything about him says, “Here’s a guy with a past.” Kassem hates Nilo, and Scanlon initially dislikes him too. Maybe he is nothing more than a tough guy for a tough job? Or maybe he has motives that are not initially clear. Who knows for sure – just watch your back around Nilo.

Sorcerer is done up in lovely Technicolor with excellent depth of field. The production design and sets are impressive. The contrast between the elegance of Paris and the filthy “end of the road” in Porvenir is striking. This is how it looks in third-world countries where the only thing that matters is mineral rights and profit.

The sound design is nearly perfect, with the creaking of wooden bridges and the trucks straining to do their job. Sorcerer is a good movie to study if you’re an aspiring sound engineer. The film’s original soundtrack was composed by Tangerine Dream, the German synth band that predates even Kraftwerk.

William Friedkin, who directed Sorcerer, also made The French Connection and The Exorcist in the early ’70s, and there are similar brushstrokes here. Friedkin likes to get in your face as a way to punctuate scenes, and there’s plenty of opportunity in Sorcerer for him to do just that. Wellhead explosions in a place like Porvenir, for instance, are a vile, nasty business to deal with, and Friedkin doesn’t back off an inch.

Friedkin knows what counts as scary on different levels and knows how to hit that note at will. Walon Green’s script can best be described as methodical and building, building, building. Brick by brick, Friedkin stacks everything up, and then the trucks (Sorcerer and Lazaro) hit the road. It totally works. And you realize what the stakes are for each individual, so by the time they reach, say, a decrepit rope bridge in the middle of a tropical rainstorm, you know full well why they keep going.

As for the bridge scene in Sorcerer, they did it for real. No gimmicks, special effects, or CGI; that was real-world stunt work. They built the bridge specifically for the movie, a hydraulically controlled set piece they could sway, tilt, and droop at will. What gets really nuts is reading what it took to do it. First, they set it up over a river in the Dominican Republic. Just setting it up took three months. And then … drought! No rain, no torrential river, nothin’! So what does Friedkin do? He dissembles the bridge, moves it to the Papaloapan River in Mexico, and reassembles it there. And then … drought again! No kidding.

So they haul in rain machines (basically sprinkler systems set up high on scaffolding) and bring in multiple water trucks to make both the rain and keep the river flowing. Friedkin later said this sequence was the most arduous scene he had ever filmed. I am not going to argue with that, although it wasn’t just the famous bridge scene. When Scheider crashes the getaway car and rolls into the hydrant, it consisted of multiple takes, and they still couldn’t get it right. So what does Friedkin do? He calls in Joie Chitwood Jr., and of course, he does it perfectly on the first and only take.

For those not steeped in old-time gearhead lore, Joie Chitwood Jr. is the son of Joie Chitwood, famous for being a racer, stunt driver, and ringmaster of Joie Chitwood’s Helldrivers. Those were the guys that would set their cars on fire and jump over a dozen busses for “entertainment.” Think of Chitwood and Co. as the predecessors of today’s Hoonigan/Gymkhana guys.

Should You Watch Sorcerer?

It’s worth noting that Sorcerer is a remake. There is a respected French film with basically the same plot called The Wages of Fear (Le Salaire de la peur) from 1953. At the time in 1977, Sorcerer caught some bad press because of this, but both films stand alone on their own merits. Both are very much worth watching.

As for Friedkin’s version, it’s worth watching because it’s not your typical modern car movie. It’s a late 1970s thriller that never had a chance because the release of Star Wars at the same time overshadowed everything. Yet, in these shadows, we have this questionable group piecing together two “good” trucks for an impossible job from the wrecking yard. They are confronted by dangerous roads, local guerillas, torrential tropical rain, and terrain that would make Werner Herzog go blanche, all while transporting precariously volatile explosives that could blow them to kingdom come (which is why they have the exhaust facing forward on Scheider’s truck).

It’s not really a question of whether they will make it to the end of the movie; the real question is, will you? As of this writing, Sorcerer is available for rent or purchase on Amazon Prime. After you are finished with your trek out of Porvenir, take a look at our other top picks on Amazon Prime.