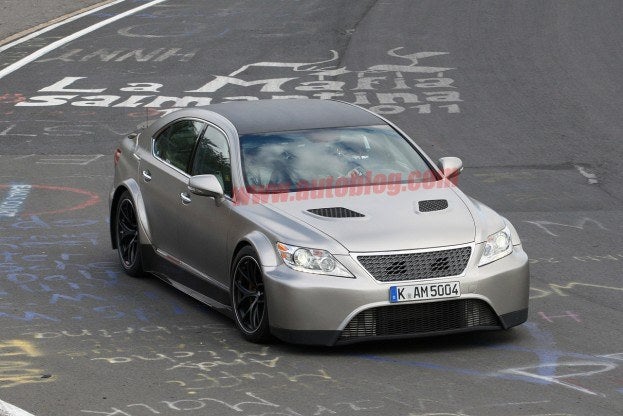 What is up with Lexus lately? The company is indicating a new focus on performance and engaging driving characteristics. The GS is supposed to be one of the first fruits of that effort. Emblematic of a change in focus is the recent news that LFA Nurburgring Edition took the record for best time at the track by a production car. It was set by a factory driver from Lexus, and it stands at 7:14.64, an impressive figure by any right.

Lexus is using experience from creating the LFA and putting it into its performance lineup that as-of-yet only includes the IS-F. That car will soon be joined by the V-8 powered GS-F, a car many of us are looking forward to. While the idea has been thrown around by Hirokazu Koga, general manager of the Lexus Development Center, the LS is a vehicle you might never expect to wear the F badge. It seems antithetical to its nature, but stranger things have happened.

Via Autoblog, an LS was spotted testing at the ‘Ring, and not just any LS, mind you – one looking much more sporty than we’ve ever seen it. The LS being tested has a full body kit with side skirts, a beefier front fascia, and an altered hood and grille. First thought would be that its an aftermarket company, but Autoblog says that it isn’t the case.

What exactly is going on isn’t clear though; it could be Lexus testing for the GS-F’s engine, or a one-off concept at an upcoming autoshow to gauge reaction. Or, it could be that it is indeed an LS F in the works. That would be pretty dramatic; even BMW doesn’t offer an M version of the 7-Series. Currently, Mercedes-Benz has the market for mainstream super sedans all to itself with the S63. Let us know what you think, and head over to Autoblog to check out the spy shots gallery.