If you need a full-size SUV, built on a truck chassis, ready to tow a trailer, and haul large amounts of cargo with nine-passengers, there aren’t many choices. The GMC Yukon XL will fill your order and can even take the abuse of rough, unpaved roads on a regular basis, something car-based crossovers won’t handle. Add the Denali trim and you’ve got a rugged SUV with the style and trimmings of a luxury vehicle.

Total MSRP on this Denali tester including destination: $80,190. The GMC Yukon XL is just that: it’s super-sized for extra cargo and passenger-carrying abilities. Yukon XL is 20.5 inches longer than the normal Yukon, on a wheelbase that’s 14 inches longer. Yukon XL offers a lot more third-row legroom, making the XL ideal for hauling large numbers of passengers. Stepping inside, the Denali proves handsome and luxurious, reminiscent of a high-end luxury vehicle.

The Yukon XL is absolutely cavernous inside were six-footers will feel comfortable for long trips. An eight-inch touchscreen sits high above logically-laid-out controls that are easy and quick to use. The front seats are especially comfortable with plenty of adjustments and power-adjust pedals to help find the perfect position for any size driver. The second row captain’s chairs are just as comfy, giving passengers extra elbow room. The XL provides ample stretch-out space for taller passengers and even the third row can handle adults without an issue.

With the third row deployed, it offers up a generous 39.3 cubic feet of cargo space. Fold down the second and third rows, and you’ve got a whopping 121 cubic feet of maximum cargo space at your disposal. Loading cargo can be a bit of a chore, however, because of the relatively high rear tailgate floor. 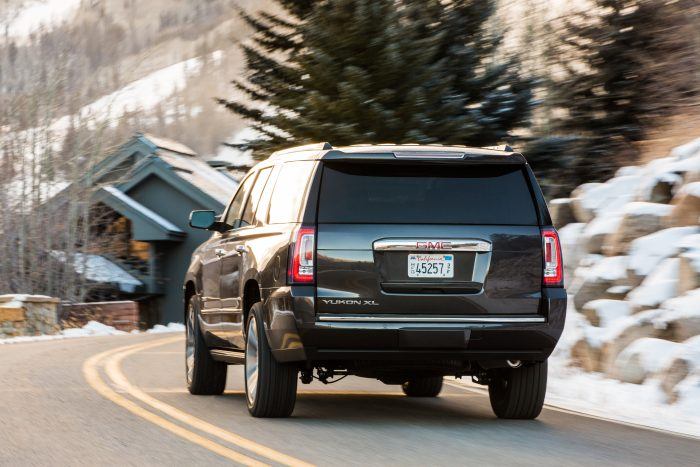 The EPA fuel mileage estimates come in at 14/21 city/highway and 16 combined mpg.

When we pushed the gas pedal to the floor, the big 6.2-liter came alive quickly and delivered a remarkably eye-opening response. Of course, the price is a big drop in fuel mileage, but the demographic that will buy the Yukon XL aren’t all that concerned with the price of gas. Although the V8 can run on half its cylinders during light-load usage to help reduce fuel consumption.

The ride is comfortable in spite of the bigger wheels and thanks in part to the Denali’s Magnetic Ride Control. The SUV smoothed out the bumps on the dirt roads with ruts. We experienced a spring snow storm in Denver and the 4WD system allowed us to cut through the ice and snow. Denali comes with a 2WD mode, 4-wheel automatic, 4-High, and 4-Low for unpaved roads and trails.

The cabin is quiet even when we stood on the gas. The new 10-speed automatic was smooth and we never felt it hunting for the right gear, even at altitude going up the steep I-70 incline heading out of town. The GMC Yukon Denali can haul a boat-load of people without an issue and the only problem we had was slower traffic getting in our way. The big vehicle gives the driver a feeling of power and authority on the road.

If you are doing high-traffic city driving, the Yukon XL is a challenge trying to navigate tight parking lots and narrow streets. It requires a rubber neck and paying attention to how you park. Denali does come with an array of parking sensors, rearview camera, and a vibrating safety-alert driver’s seat, which we thought was a bit over the top.

The GMC Yukon XL Denali offers a rugged SUV with the style and trimmings of a luxury vehicle. It will handle all your people and cargo-hauling needs with room to spare. The Denali is luxury grade. Add in the 4×4 capability and you’ve got a big family hauler that will go anywhere you point it.