GMC Sierra All Terrain HD Being Debated For Production?

One of the first introductions we saw from the North American International Auto Show was the GMC Sierra All Terrain HD. The truck is a concept that shows GMC’s take on the performance off-road truck segment.

Ford has reinvigorated interest in off-roading and performance trucks with its Raptor, which now is available in four-door Crew Cab guise as well. We’ll take one in orange, please.

The Sierra All Terrain HD is more than just a performance package though – it also shows off different design cues and details that seem to hint at the look of the next-generation of the Sierra pick up. 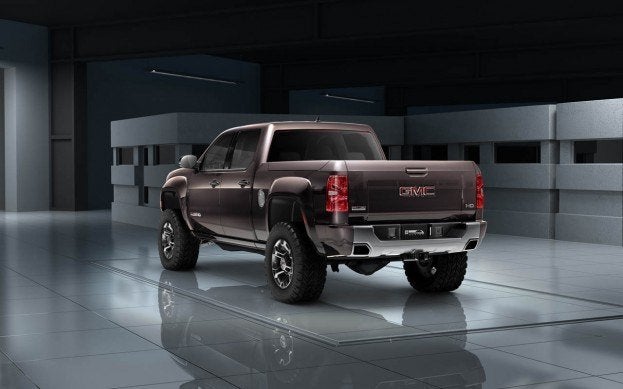 Ground clearance has been increased by about three inches for All Terrain duty and width is up by 4 inches, to 73 inches.To complete the look there are new 20-inch aluminum wheels with 35-inch BF Goodrich KM2 mud terrain tires.

Motivation comes from General Motors’ 6.6-liter Duramax diesel V-8. It produces 397 horsepower and an insane 765 pound-feet of torque. After speaking with the truck’s designer Carl Zipfel, Autoblog reports that the truck is being considered for production, although there are no official plans to build it. Things they did confirm for production is the truck’s Iridium Metallic paint color (set to be a GMC exclusive) as well a dark anodized satin trim finish.

We think producing it makes sense, especially for the GMC brand which is very focused on things like towing. The Sierra All Terrain HD isn’t exactly a direct competitor to the Raptor though – hence the Heavy Duty title. For competition we’d need a lighter, more agile truck. Maybe Chevrolet can produce that one?