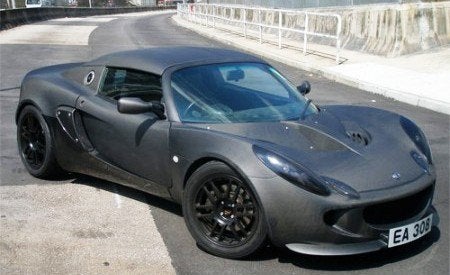 Some crazy rich guy (named Jimmy, apparently) wasn’t happy with the scale-busting weight of his Lotus Elise, so he gave it to some tuners in Hong Kong to fabricate a new one – completely out of carbon fiber! Ok, it’s not all made from carbon, but it’s damn close.

As expected, the whole body is constructed from the lightweight and super-strong material, as is a good portion of the interior, the seats, the roof, and the side mirrors. The interior is a mix of raw black and silver carbon so there could be some design element in there, I assume.

So how much weight did Jimmy save from this long and expensive modification? It weighs about 66-88 lbs less than the stock Elise. Doesn’t seem quite worth it, but after all, he now has the only Lotus Elise made almost completely out of carbon fiber.

After all that, and still doesn’t have a carbon fiber steering wheel. For shame.