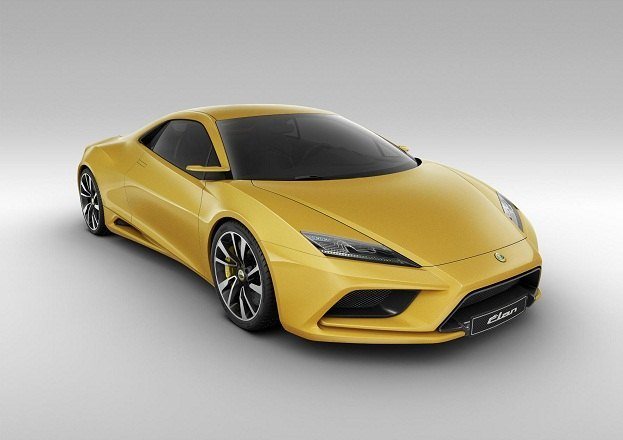 The second-longest running name in Lotus sports cars’ historic lineup, one of the company’s futuristic offerings plan to revive the Elan title. Spending a total of 19 years in production as the modestly budgeted sports car, the Lotus Elan nonetheless succeeded in delivering solid handling. Though never enjoying the glitzy movie star background that the top-end Esprit basked in, the Lotus Elan moment in the limelight served as Ms. Emma Peel’s (Diana Rigg) vehicle, the popular British television spy show The Avengers. Relating to a human symbol of that era’s beauty, perception also transferred to admiration for the small Lotus sports car. The Elan name’s most recent adaptation aims to compliment the reputation for beauty and trademark Lotus handling while adding practicality.

Appearing smaller than the upcoming Lotus Esprit and Elite, the Elan sports car lines are precisely tailored for what Lotus Cars terms as “an athlete with a muscular physique.” Considerable flaring around the wheel fenders and defined side panels present the Elan as a more aggressive package similar to the current model Elise. Estimated at a 2,850-pound total weight, the Lotus Elan is the 2nd lightest automobile inside the new British sports car line.

Coming standard as a two-seater, a choice will exist on whether you want to take two additional passengers for the ride. A 2+2 interior option will be available on the Lotus Elan, bringing some practicality to the potential market. Chief Executive Officer of Group Lotus Dany Bahar explains that the Elan’s design seeks to be an everyday sports car. “The Elan will convert people to Lotus; I would challenge people not to become addicted to driving it. It will also go a long way towards dispelling the old misconceptions about this class, that to have high performance, you must sacrifice usability – those days are gone.” Presented initially as a front-engined roadster in 1962, the new Elan is guided by new-age engineering entailing this recent incarnation of the small Lotus will elect for a rear mid-engined configuration. Behind either a 2-seat or an optional 2+2 seat cabin, the Lotus Elan’s is propelled by a 450 PS (443-horsepower) 4-liter V-6 engine. Like many future Lotus offerings, the Kinetic Energy Recovery System (KERS) will be an available performance accessory on the upcoming Lotus Elan. The Elan will be exclusively rear-wheel drive with a 7-speed dual-clutch transmission managing power between the engine and the vehicle’s differential. Guaranteeing incredible performance, the Elan’s 0-62 mile per hour run takes only 3.5 seconds, with top speed trailing past 192 miles per hour.

Closely mirroring the recently-introduced Lotus Evora, it seems unlikely the British sports car company will maintain a lineup bordering on such redundancy. Slated as a late 2013 entry, the Lotus Elan might replace the Evora as a more powerful and more expensive offering. Price indications for the Elan are said to start at £75,000 (short of $119,000 U.S.).