The heat is closing in on Ferrari’s mythical Enzo successor, but the official debut isn’t due until the 2013 Geneva Motor Show. In the meantime speculation is in high gear, and to keep you readers entertained we’ll contribute with a little something of our own to tease your retinas with. It’s time to square your eyes and get drooling, because these renderings of the F70 in show worthy clothing will get the job done quicker than a women’s underwear catalogue.

Now, the upcoming F70 has some sizable waders to step in, but if the final version looks anywhere near as hot as in these pictures we’d say it’s taken those waders, glared at them in discontent and bought new designer boots instead, because it’s disturbingly good-looking. The front end is riddled with styling cues from the 458 Italia, but it’s miles meaner than that. There are slight nods to the F40 here and there, and in a way it emits that same rawness, but unlike the F40, you don’t have to rule out the word ‘sophisticated’ from the vocabulary when you get closer than 50 yards to it.

Paying homage to the Enzo, the power production-part in the F70 is respectfully dealt with by a V12, but instead of 6.0 liters there’s now 7.2, and on top of that the engine is mated to a hybrid KERS-system, which was first seen in the 2010 Ferrari 599 Hy-KERS concept. With the KERS-system the F70 also works double as Ferrari’s answer to the Porsche 918 Spyder, and what an answer it is.

The rumored performance of the F70 tips the scale between insane and diabolical. Combined power output for the V12 and KERS-system is of jaw-dislodging proportions; 920 horsepower to be exact. This monstrous amount of power fused with the unhealthily fit body of the F70, weighing in at only 1250kg, is whispered to be enough to hurl the ruddy beast from 0-62 in 2.5 seconds and get it up to a top speed of 250mph. This depicts the return of the Daddy, consider yourself put in place all careerist supercar-newcomers. 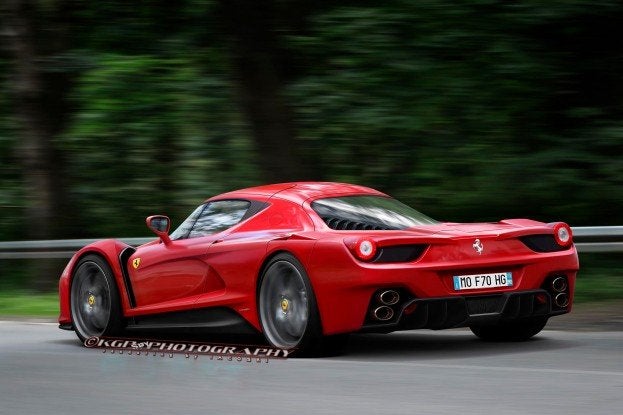 Now, marvel at the specs, look at the pictures and feel your pants get cramped a bit. Let’s hope Ferrari pulls this off and makes reality match our dreams. Stay tuned as the story unravels.