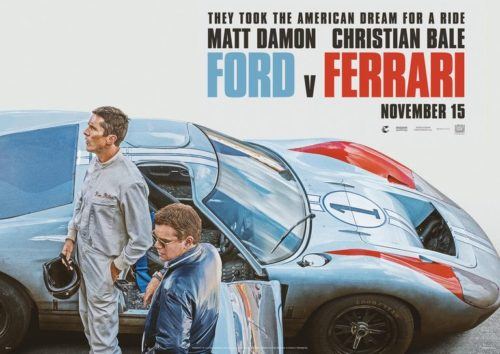 Ford v Ferrari, the much-hyped racing film all over every car-related feed in the known universe these past months is, in many ways, a typical modern racing movie. I had the opportunity to see it recently, and although it was not a great movie, it wasn’t flat out terrible either. The film officially hits the box office this weekend.

From the gearhead perspective, there’s a lot to like here. It’s a “true” racing story and not some sort of cooked up, cockamamie nonsense like Sylvester Stallone’s Driven or literally any of the The Fast and the Furious movies.

What Is Ford v Ferrari About?

Ford v Ferrari tells the well-worn tale of Ford taking on Ferrari at the sports car race, Le Mans. This is conveyed, in a semi-buddy picture kind of way, through Carroll Shelby and Ken Miles portrayed by Matt Damon and Christian Bale respectively. Unfortunately, the entire story is rather rote and mechanical despite the star power.

Racing in the 60s in general, and Le Mans in particular, is a tale very much worth telling, but it just seems no one here is capable of telling it. It doesn’t fly off the screen. It’s just sort of there.

Given the racing scenes and sound effects, it will be popular with gearheads. Shoot, I’ll probably end up buying the DVD just to have around. But if someone asks me to explain racing to them, I won’t show them Ford v Ferrari. Instead, I’ll show them news footage from the actual race.

Other than that, the gearhead quibbles are kind of minor. They seem to use the same four Porsches as background cars. They insist on the drivers doing that “okay, now I’m going to go faster” thing and then mash down on the gas. There’s nothing irritating to the point where I gave up entirely on the movie, but there was never a single moment where I went “Yeah! That’s cool!”

The biggest problem with Ford v Ferrari is how it doesn’t honor the actual history. Ford’s decision to go racing – Total Performance, as they called it – and how the company first interacted with Ferrari, and then decided to take on Le Mans is, in and of itself, a very interesting story. Had the filmmakers just attended to that, Ford v Ferrari would have been a much better movie.

Instead the filmmakers had to “improve” the story. They added stuff in. And I’m not talking about artistic license here. There is plenty of that. There always will be in film.

What I am talking about is completely unnecessary and blatantly untrue stuff like making Carroll Shelby out to be a prankster; Ken Miles as some sort of unsung superhero driver who never got his due; portraying Leo Beebe as a corporate shill who – on his own – came up with the staged finish at Le Mans in 1966 at the last minute.

The film assumes Miles more or less drummed up the GT40 Mk. II after one drive in the prototype GT40. There is the proverbial “trouble at home with the wife” stuff, and the just as proverbial BS of having someone (Miles, in this case) talk with near-mysticism about driving on the limit; driving with perfection; racing as near-spiritual calling. Three frickin’ times.

The one that really rubbed me the wrong way was this: Enzo Ferrari is at Le Mans in the movie but that wasn’t actually the case. It is a well-known fact The Old Man never, ever attended races. They made him too nervous, and in the post war period he only made it out to a race twice. Both times for the Italian GP, once in 1957 and again in 1964. The fact he even showed up was a separate story in the Italian papers. Both times.

But why is all of this so bad? Because it is completely and utterly unnecessary. It is insulting to the subject matter and it is insulting to the educated viewer. It treats history – something recorded and known for literally 50 years – as something not really worth telling. It’s as if someone said, “Yeah, that’s interesting and all that, but this movie needs more zip. It needs more pizazz! Can we thrown in a Kardashian cameo?”

Now, most people are not going to notice much (if any) of this, but picture this: What if Saving Private Ryan was jazzed up a little bit by having Tom Hanks lead a group of soldiers that were also capable of psychic feats of magic. Like The League of Extraordinary Gentlemen meets Omaha Beach. Sure, you might be able to make that an entertaining and watchable movie; but you will get zero accolades from people who were there, people who remember it, or people who simply read history.

Ford v Ferrari Does Not Tell Everything

Ford deciding to literally take on the world and win is interesting enough as it is. Believe me, I was there and the racing world was deeply enthralled for years about this story and how it was going to turn out. There are entire books on the subject. The filmmakers could have simply told that story, the real story, and it would have been better.

Instead, Ford v Ferrari assumes we are easily bored, and indulges in made up fluff and plot devices which insult a generation of racing fans who value the history of the sport.