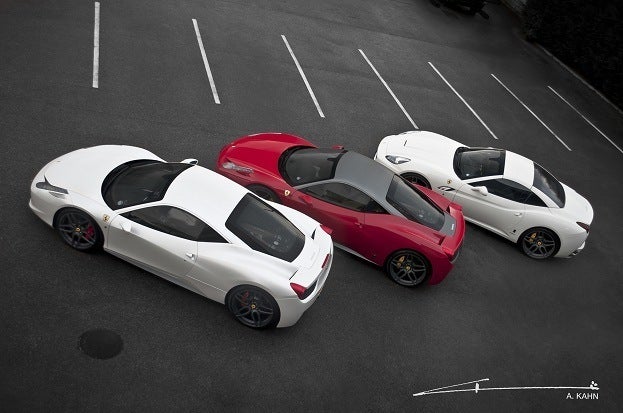 For some people, owning an exotic, desirable Ferrari street car just isn’t enough. While one of every modern Ferrari built to the exacting detail of the Maranello, Italy factory, some prospective buyers might feel the ultimate Italian supercar lacks the bespoke touch. Thankfully for those discerning Ferrari fans seeking a more exclusive driving sensibility, the aftermarket tuner market accommodates to the very niche customer base.

Perhaps a larger market than some would expect, HAMANN, DMC and RSC Tuning are only a few companies who have taken a crack at individualizing the Ferrari 458 Italia sports car. Joining a sizable choice of 458 Italia coupe modifiers, A Kahn Design wants to tend a few supercar customers with their interpretation on the popular Italian vehicle.

The A. Kahn Design Ferrari 458 Italia makes alterations in almost every area of the supercar with exception given only to the 562-horsepower V-8 engine. Profiled with two examples of the Ferrari 458 Italia, one with a Rosso Corsa red exterior and another with a triple pearl white outer body shell, the A. Kahn Design vehicles upgrades the bravado of the Italian supercar without crossing the prancing horse.

Exhibiting two available colours of the Kahn Ferrari 458 Italia supercar, the Rosso Corsa red and triple pearl white vehicles feature exterior accenting providing an additional sense of high-performance. Special front and rear diffusers are worn on the red A. Kahn Design-prepped Ferrari 458 Italia matching the matt gray coloured side skirts. The roof of the 458 Italia can be coated with an identical matt gray colour giving a super exotic appearance to the mid-engined car. The less radical Ferrari production set of 20-inch alloy wheels with the 458 Italia in case drivers are afraid of denting up the pricy rims through more regular driving. Within whichever variety of wheels worn on the A. Kahn Design Ferrari 458 Italia, the coloured aluminum brake calipers tastefully shine. Painted red on the white version of the 458 Italia, the red-bodied Ferrari receives yellow brake calipers.

Continuing to perpetuate the sense of a pure 202-mile per hour performance car on the outside, the A. Kahn Design Ferrari 458 Italians two-seat interior is a tailored operation center for many hardcore motorist. The finest interior materials are utilized inside the Kahn Ferrari 458 Italia such as leather for the headliner and carbon fiber trim. The driver shifts through the seven-speed, dual-clutch gearbox through F1-syle paddles while riding in electronic sport seats. The Kahn Ferrari 458 Italia can be loaded with a full array of high tech features including satellite navigation, Bluetooth connectivity and the NAVTRAK anti-theft system.