Volkswagen Golf R Gets The Abt Sportsline Treatment 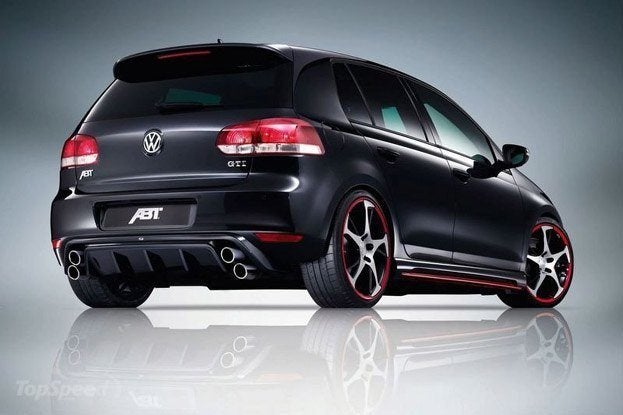 For some reason, doing the tuning thing to a ride like the Volkswagen Golf R makes more sense to me than doing it to something like a huge Mercedes S Class or a Ferrari Anything. It kind of holds true to the tuner roots in a lot of ways. And making a kind of fast car much faster seems more interesting than making an already very fast car kind of a little bit faster. For example, note the Volkswagen Golf R that German tuner Abt Sportsline has just given a once over.

ABT Sportsline says that what they’ve done to the VW Golf makes it “a compact super sports car.” Sure, tuners are given to hyperbole, but they sure seem to get the numbers right with this little box.

Instead of the standard 270HP from the Golf R the ABT Sportsline massaged plant now puts out 310HP and tops out at a rather notable 261 km/h. ABT Sportsline officially refers to their Golf R as the ABT R20, and they are quick to note that it blats from a standstill to a speed of 100 km/h in 5.2 seconds. That’s certainly quick.

“The compact car is really good fun, particularly on corners”, says Hans-Juergen Abt, head dude and General Manager of ABT Sportsline) so THAT’S where they get the name). “VW gave the Golf dynamism when it was in the cradle – it defines sportiness in its class. And the Golf R is the champion of fast Golfs,” Hans-Juergen continued.

In addition to working over das mill, ABT also gave the ABT R20 daytime running lights, a new front apron and front lip to “make the Bavarian car seem even more powerful.” They also attached a set of new CR alloy 19 inch wheels. Of course they’re wrapped in high-performance tires.

ABT also goes out of their (his?) way to say that “The newcomer to the Golf family is, of course, absolutely suitable for everyday driving and is good-natured and not touchy in heavy traffic.” Good.