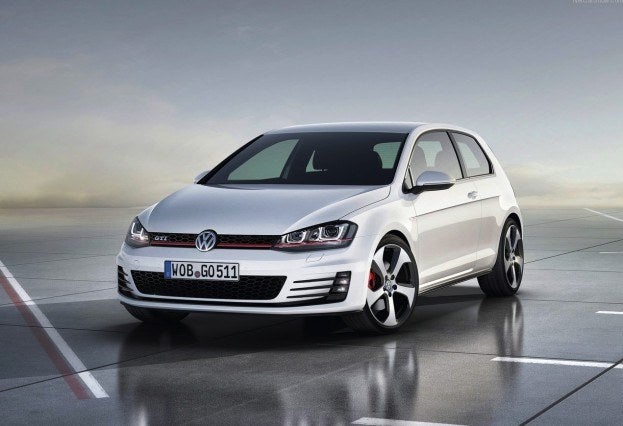 The 2014 Volkswagen Golf has launched at the Paris Motor Show, being the seventh iteration of the VW brand’s bread and butter vehicle. While not visually a huge move forward, underneath the car switches to VW’s MQB platform, dropping 220 pounds in the process. Along with the standard car VW is showing off the GTI Concept.

And that’s “Concept” – it is nearly an exact preview of the upcoming production model. Very few details have been released, except what is underneath the hood. The car’s turbocharged four-cylinder makes 217 horsepower, a bump of 17 horsepower versus the current car. The GTI’s weight reduction will enable an 18 percent increase in efficiency. The concept has been shown off in the GTI’s traditional white/red launch color scheme. That includes interesting elements, such as a continuous red line that runs though the front headlights and grille. Like the rest of the lineup the GTI gets extra interior room (increased luggage space and legroom for rear passengers) along with available technologies like PreCrash (accident detection/prevention system) and “multi-collision” braking. New infotainment systems round out the changes to the technology package. What’s more is that the interior is now canted toward the driver, and appears to be top notch in design and details.

Recently we’ve expressed disappointment at what appears to be a move backward for VW design, particularly in interiors. For instance, with the U.S-focused Jetta and Golf, the interiors in the previous generation models were undisputably better (thanks to cost-cutting). The Golf bucks that trend, and we hope it is indicative of future VW models to come. All in all the seventh generation Golf really moves the ball forward, improving the formula in every way over the previous car. Stay tuned for more details on the production GTI as we move closer to a launch. In the meantime, check out our gallery below.