Affordable performance is making a comeback. Chevrolet has shown off two interpretations of a sports coupe at Detroit and Scion debuted the FR-S recently. Now its Hyundai’s turn to focus on performance with two debuts at the Detroit show.

The first is the 2013 Hyundai Genesis Coupe, which received a mid-cycle enhancement. Styling wise. we’ve see quite a bit of it over the past few months – full shots have leaked out. Needless to say, it hasn’t been the best kept secret of the show. The styling changes update the car to give it a more aggressive and modern face inline with the Veloster. It is more youthful than the previous Genesis, and it ditches the cheap-looking grille that car had. 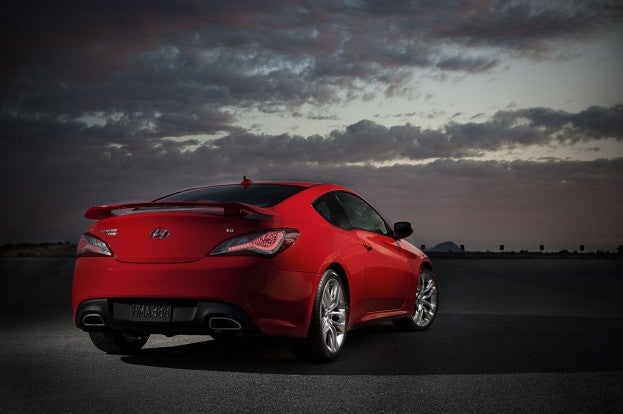 Underneath the hood is where the most important changes are though – there is huge boosts in power in store for buyers of the 2013 model. This isn’t just a tweak here and there. The proof is in the numbers. The Genesis Coupe has always had a turbocharged four-cylinder as its base model.

The four-cylinder gets a new turbocharger and intercooler setup that is good for 275 horsepower and 275 pound feet. That is up by 74 hp (!) and 52 lb-ft of torque. Whoa. With prices like they are on the Genesis Coupe, that is a serious value proposition. Consider that its chief competitor, the Scion FR-S, has 197 hp and things are looking good for the Genesis indeed.

The 3.8-liter V-6 gets a boost in power as well, up to 348 hp and 296 lb-ft. The current car makes 306 hp and 266 lb-ft. A new eight-speed automatic replaces the previous unit, and is good for a slight fuel economy boost. As for prices, Hyundai hasn’t released any new figure. The Genesis Coupe is a big step forward for Hyundai performance, and it shows the company is serious about continuous improvement. Bring it on!