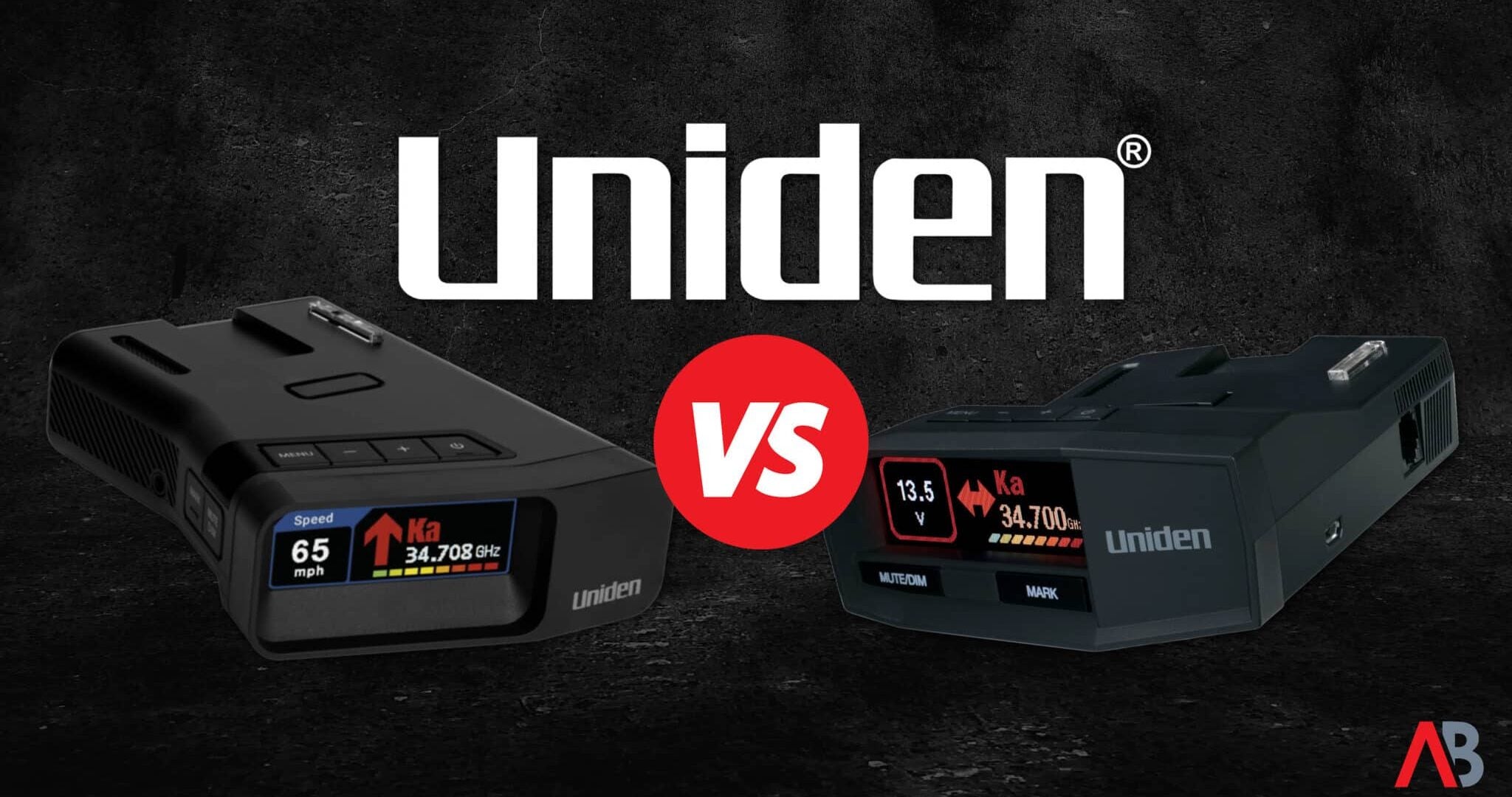 Affiliate Disclosure: As an Amazon Associate, Automoblog earns from qualifying purchases, including the radar detectors featured here. These commissions come to us at no additional cost to you.

The Uniden R7 enjoys a strong reputation on the Radar Detector and Countermeasures forum. As far as Uniden’s product lineup goes, the R7 might be a little older, but it’s far from extinct. During CES 2022, Uniden announced the R8 would be their next flagship model, although it didn’t outright replace the R7. Instead, Uniden has kept the R7 but moved it to a lower price point, which is a bonus if you are looking for a high-caliber radar detector for less money. Regarding which one you should go with, here is what we recommend.

Let’s take a closer look at each radar detector.

Affordable and trustworthy is also how I describe my Uniden R3, which was “replaced” by the more current R4. It’s a similar situation here between the R7 and R8. While technically speaking, the R4 has replaced the R3, and the R8 replaced the R7, the release of the newer Uniden radar detectors dropped the price of the now older R3 and R7.

As Uniden’s former flagship, the R7 offers long-range detection and directional alert arrows via its dual antenna setup. Here is a link to my full review of the Uniden R7, but allow me to summarize the high points.

The Uniden R7 will alert you to X, K, and Ka radar bands and laser (LiDAR) guns. You can adjust the K and Ka filters in the settings menu, along with a segmentation filter. Since I mostly encounter Ka here in Michigan, I set my R7 to narrow Ka segmentation.

Both the Uniden R7 and R8 include a built-in GPS to notify you of things like red light and speed cameras. When warning you of an upcoming red light or speed camera, the radar detectors will display traffic light or camera icons and the corresponding distance (in feet) to the alert on their respective OLED displays. The GPS also allows you to mark locations where radar sources are commonly present and utilize features like Quiet Ride and Limit Speed.

Both the R7 and R8 have City and Highway modes. In City mode, X and K band sensitivity is reduced to prevent false alerts, while Ka bands stay at full sensitivity. In Highway mode, all bands go to full sensitivity to give you the most reaction time on the open road. You can further optimize the sensitivity levels for both radar detectors through the Advanced Mode.

The R8 offers one additional mode – Auto Sensitivity – that the R7 does not. Essentially, it’s a speed-dependent mode, automatically switching back and forth between City and Highway modes at a pre-set speed (you can set the R8’s switching point between City and Highway in 5 mph increments between 10 and 60 mph). Since I’m usually navigating stop-and-go traffic here in the Detroit metro, particularly on main roads like M10, I-696, I-94, and Telegraph road, I appreciate the convenience of the R8’s Auto Sensitivity mode.

For example, the Radenso DS1 is a fine radar detector with nearly all of the same features as the R7 – except for one – the directional alert arrows. As of this writing, the Radenso DS1 retails on Amazon for about $470, the same as the R7. I own a DS1 and love it, but lean toward my R7 because of the directional alert arrows when I have to take extended road trips to Ohio, Indiana, or Minnesota.

Driving With The Uniden R7

While the general consensus on the Radar Detector and Countermeasures forum is that there is no “perfect” detector, the R7 is probably as close as you can get. I sometimes have trouble with K band falses when going through road construction zones, but that’s really about it. I would consider myself a diehard radar detector enthusiast, so the R8 has a certain appeal with its latest features, but for the price, the R7 is hard to argue with.

If the R7 lacks anything for the time it was initially released (April 2019), it’s Bluetooth and app connectivity. Escort radar detectors are synonymous with this, as most of their units can pair to apps like Escort Live and Drive Smarter. Yet, at least for me, that isn’t a deal breaker when looking at the R7 versus a comparable Escort. I have my Escort M2 dash camera mounted to my MAX 360c, but I’ve had terrible luck with the Drive Smarter app and cannot fully use all the features of the M2 dash cam as a result.

Since the reviews, as of this writing, are still mostly negative on the Drive Smarter app, consider the R7 a high-end radar detector without the hassle of smartphone integration.

Given its list of features – directional alert arrows, segmentation filters, and built-in GPS – and its overall reputation, the Uniden R7 is a steal at its current price point. However, if you are still interested in the R8, let’s cover that more below.

The Uniden R8 has all the same features as the R7, with some additional functionality thanks to its new platform (one feature is the Auto Sensitivity mode we discussed above). Here is a link to my full review of the R8, but allow me to summarize some of the key differences between it and the R7.

Regarding the R8’s platform, a good comparison is a vehicle platform, or rather, the architecture and chassis. Every vehicle has a “platform” on which it’s engineered and manufactured. Imagine the difference between a vehicle built today and a decade ago. The new vehicle will be safer, more fuel-efficient, handle better, and have more tech features. The updated architecture, or platform, allows such things to come to fruition. The same analogy applies to the Uniden R8 and R7, just a little smaller.

This new platform allows the R8 to have things like an Auto Mute Memory function, upgraded dual low-noise amplifiers to catch radar sources from farther away, laser gun identification, and the ability to detect Gatso radar used by the latest speed cameras. These differences between the Uniden R8 and R7 may help justify the price bump.

It’s easy to get caught up in the semantics if you deep dive between the R7’s owner’s manual and the R8’s owner’s manual, but the latter’s “Auto Mute Memory” is often called “auto lockouts” in the radar detector community. Usually, you do these lockouts manually – and you still can with the R8 – it’s just that the R8 will do them for you in certain instances.

When you encounter a stationary alert you know to be false, press the Mute/Dim button on the unit or the Mute button on the power cord to engage a manual lockout. You will then see “Mute On” appear on the display. Press one of the buttons again to save that location and frequency to the GPS memory bank. When you pass that location again, the R7 and R8 will display the alert and frequency on the OLED display, but it won’t make a sound.

The R8 is designed to do this process automatically, hence the term “Auto Mute Memory.” It’s a convenience feature enabled by the R8’s new platform. The only potential drawback is how little the feature actually engages on its own. Barring a software update in the future from Uniden for the Auto Mute Memory, you will likely still be doing most of your lockouts manually with the R8.

Driving With The Uniden R8

The Uniden R8 sits alongside units from Escort, Cobra, Radenso, and K40 in my collection of radar detectors. I also own a Uniden R3, R4, and R7. As of late, if I am not writing a review about another radar detector, my Uniden R8 is my preferred choice as a personal, daily driver. I like the Auto Sensitivity feature as I can “set it and forget it” as I go about my day. There is no denying the incredible detection range of the R8, and the directional alert arrows give you more situational awareness than something like an R3 or R4 (as good as those radar detectors are).

It ultimately depends on what you need if you are between the Uniden R7 and R8. There is a slight functionality advantage to the R8, but the remarkable price point of the R7 may override that. From a pragmatic sense, the functionality advantage is somewhat of a moot point, considering features like the Auto Mute Memory or auto lockouts we discussed above. Uniden has since released a firmware update for the R7 that includes auto lockout capability.

For additional insight, browse through the Radar Detector forum, which has an entire discussion section dedicated to Uniden radar detectors. There are tons of people on there (myself included) who can help you make the best decision.