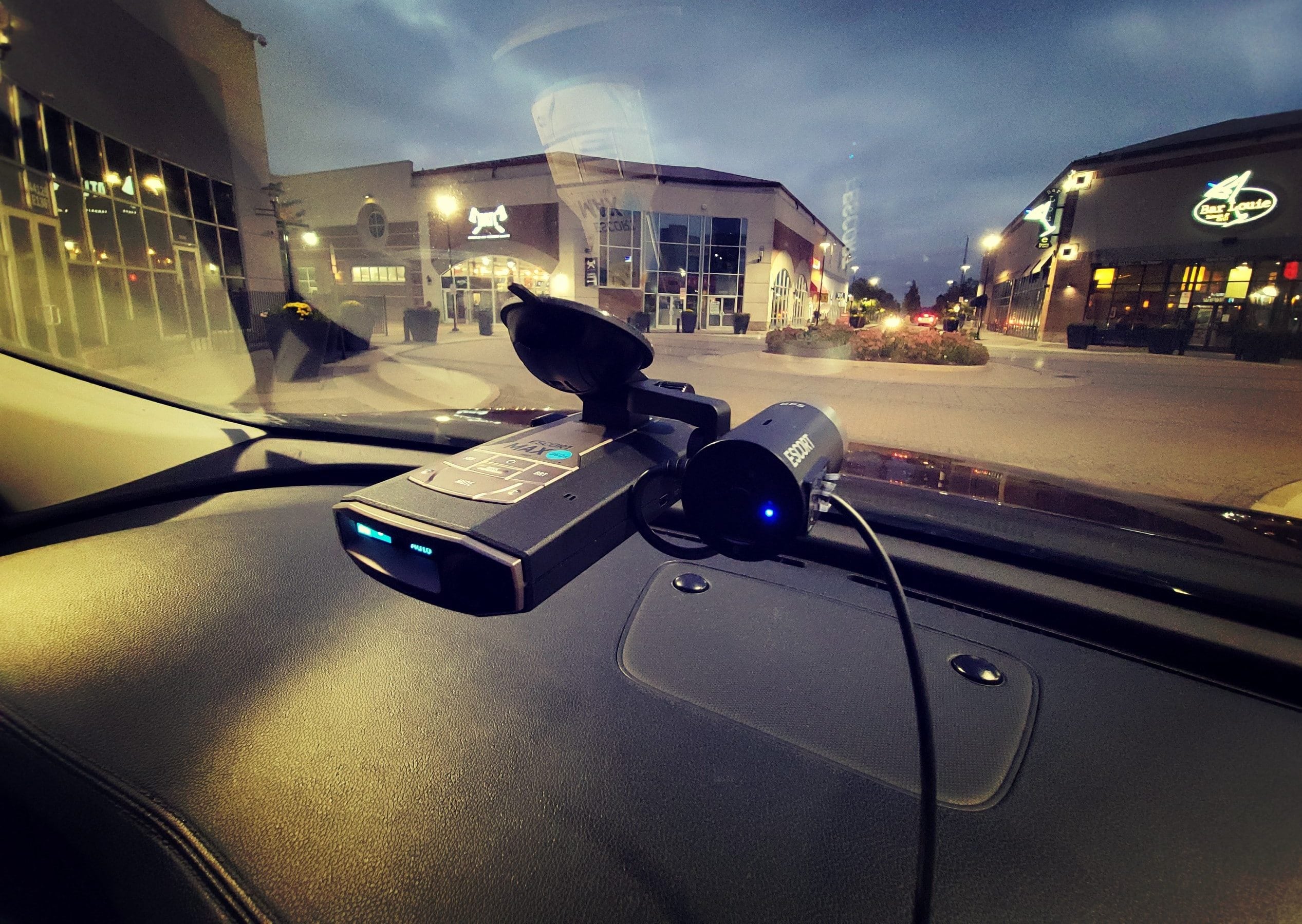 Affiliate Disclosure: Automoblog may earn a commission when you purchase the products featured in this review. These commissions come at no additional cost to you. The Escort M2 Dash Cam in this review was supplied to Automoblog by Cedar Electronics. The opinions below are my own based on my personal experience with the product.

The Escort M2 is a “radar-mounted” dash camera, meaning it attaches to an existing Escort radar detector as an accessory versus being a standalone unit. As a follow-up to Escort’s M1 dash camera, the M2 is a solid upgrade, offering valuable features like a built-in GPS and mayday alerts. As of this writing, the M2 dash camera retails for $199.95 on Escort’s website.

Leading up to this review, I spent several months driving around the Detroit metro with the Escort M2 Dash Cam, eventually taking it on a 700-mile trip to see family in Nebraska for Thanksgiving. Most of the time, the M2 was attached to my MAX 360c (I also have a MAX 360 and had the M2 attached to that unit briefly).

We will start with an overview of the features, then go into more specifics, including how to install the M2. We will cover the Drive Smarter app and our frustrating experience with it. Near the end, we will provide a comparison chart between the M1 and M2 dash cameras if you are on the fence between the two.

Benefits of a Dash Camera

Based on our experience, there are a few reasons to own one. The first is for safety and security. If you are the victim of a hit-and-run, road rage, or insurance fraud, a dash camera can work to your advantage if you need to defend yourself legally. Dash cameras can also provide peace of mind for parents with young drivers and business owners with fleets. The only consideration for the latter is how radar detectors are illegal in commercial vehicles, so the M2 is not the best choice.

Another reason is simply for enjoyment. It’s fun to capture footage on a road trip and view it later. My wife and I saved this footage of the Santa’s Rockin N Lights display at Werner Park near Omaha.

While driving to Omaha from Detroit, we had two instances where another driver cut us off in fast-moving traffic: once in Chicago and another in Des Moines. Luckily, they were close calls and not accidents, but the Escort M2 Dash Cam recorded both incidents.

The M2 goes into an emergency mode during a collision, hard braking, or any other event that triggers the G-Sensor. This saves the footage separately from the M2’s default “continuous loop” mode, so it’s not recorded over. An audible alert of “File Protected” will sound. Immediately after an accident, the mayday alert feature sends a text message automatically to your emergency contact. Detailed incident reports can be generated later for the insurance claims process.

Other key features include full 1080P resolution, a 140-degree field-of-view, dual-band Wi-Fi, and a built-in GPS. Although the M1 dash camera records in 1080P, it does not offer Wi-Fi or GPS.

Wi-Fi capability means the M2 can connect to the cloud to receive automatic updates and alerts. You can store, edit, and share any footage you capture on the road through the Wi-Fi connection. Meanwhile, the GPS records your speed and location, valuable information if you find yourself in a situation like we described above.

The M2 comes with a long bolt, two washers, a windshield mounting bracket, a 16GB SD card, and a USB data cable to transfer footage from the dash camera to a computer. The M2 is compatible with the Escort Redline 360c, Redline EX, MAX 360c, MAX 360, MAX 3, the iXc, and iX. It’s also compatible with all Escort laser shifters.

The video below shows how to attach the M2 to a compatible Escort radar detector. The M2 does not come with its own power cord. Instead, you will use your radar detector’s current power cable to run the M2.

There are two things to keep in mind when it comes to installation. The first is to position the radar detector a little closer toward your steering wheel than you usually would. This “left offset” will allow the Escort M2 Dash Cam to film from the middle of your vehicle.

The second is how the M2 will add weight to an already heavy radar detector, especially if you are running something like the MAX 360c like I was. To ensure the best possible seal, I cleaned my radar detector’s suction cup mount and a small area of the windshield inside my car with rubbing alcohol. This helped my MAX 360c and M2 stay “glued” to my windshield.

The back of the Escort M2 Dash Cam is relatively simple. At the bottom is the micro SD card slot (already inserted before purchase). The power button, which doubles as the emergency recording button, is in the middle (press it twice to take a still photo). Just above the power button is a recessed camera reset button. To the right are two LED status indicator lights. The blue one blinks when the M2 is powered up, while the red one blinks to show the camera is recording.

On the right side of the M2 are two insertion points: one for the USB data cable and the other for the power cable.

Below is a collection of day and night footage taken from a drive around the Detroit area. Overall, I am happy with the quality of the footage.

Through Escort’s Drive Smarter app, you can utilize the M2’s full range of capabilities (or, in theory, anyway). While connected to the app, you can view a live stream feed in real-time via the camera’s Wi-Fi and save any footage to your phone. You can adjust different camera settings and set up your mayday alerts (i.e. emergency contact). Over-the-air updates will also come via the app.

I didn’t have the best luck with the Drive Smarter app, by which I mean I was never able to successfully use it once. I’m not sure if it was user error on my end or if the app is just genuinely bad. My car doesn’t have a Wi-Fi hotspot, so I wonder if that is part of the issue? For example, to connect my phone to the M2 through the app, I have to use a “temporary” Wi-Fi connection. But that connection fizzles out before I can go in and configure the settings on the camera. Most times, I only see a “perpetual circle” on my phone as the app rarely, if ever, connects to the M2.

As of this writing, user reviews of the Drive Smarter app are pretty terrible, so it’s probably not just me. I like the Escort M2 Dash Cam but not the app. Based on my experience and after reading the reviews of other users, Escort has a lot of work to do on the Drive Smarter app. When Escort fixes the app, it will be nice to go in and play around with the different settings for the M2.

Although Escort strongly recommends it, the Drive Smarter app is not totally necessary to use the M2. Once it has power, the M2 will still record and save video, be it in a continuous loop or separately as another file during an emergency. You won’t be able to view anything in real-time on your phone, but you can still extract footage via the included USB data cable and view it later on your computer.

The graphic below shows key differences between the Escort M2 Dash Cam and the previous-generation M1. For us, the M2 wins because of the built-in GPS, mayday alerts, and incident reports. However, the caveat with things like mayday alerts is how they require the Drive Smarter app to set up. And since the Drive Smarter app seems to be loaded with bugs, it may be difficult, if not impossible, to access some of the M2’s top features.

Should You Buy The Escort M2 Dash Cam?

The answer varies, depending on your vantage point. Personally, I like Escort radar detectors and own both a MAX 360 and MAX 360c. While opinions about which radar detectors are the best will differ, I’m mostly an Escort fan. So for somebody like me, the M2 is an excellent addition to a radar detector I already enjoy. If you like Escort products or are considering the M2 as a gift for someone who does, then it’s probably a safe bet.

However, I’ve not been able to fully explore the M2 because the Drive Smarter app is overly complicated and largely uncooperative. So while the M2 offers more features than the M1, the fact I’m unable to use the app means I cannot take advantage of those features. And in some ways, because of that, this review is not as comprehensive as I would have liked. That said, it’s probably better to go with the M1, which is the same price as the M2 on Escort’s website as of this writing ($199.95).

If the app worked well, it would be a no-brainer to go with the M2 over the M1. But as of right now, it can be hard to justify paying for the M2 when the accompanying app is not up to par. It’s our hope Escort will get the bugs worked out so drivers can maximize their experience with the M2 Dash Cam.

The Escort M2 is a “radar-mounted” dash camera, meaning it attaches to an existing Escort radar detector as an accessory versus being a standalone unit. As a follow-up to Escort’s M1 dash camera, the M2 is a solid upgrade, offering valuable features like a built-in GPS and mayday alerts.

However, the M2’s app is filled with bugs that hinder the overall experience with the dash cam.