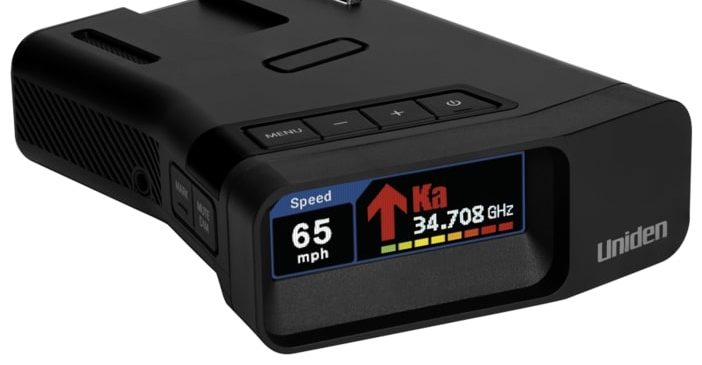 Affiliate Disclosure: As an Amazon Associate, Automoblog earns from qualifying purchases, including the radar detectors featured in this article. If you purchase the R7 via this article, we will earn a commission (this comes at no additional cost to you).

You might have heard good things about the Uniden R7 radar detector, but is it worth the investment? After all, it’s a higher-priced unit. As of this writing, it retails for about $480 on Amazon. If you’re skeptical, the best thing is to spend some time looking at its features to determine if it suits your needs and budget. And that’s just what we’re here to do in this compressive overview of the Uniden R7.

Uniden R7 In-Depth: What It Offers

In addition to the standard radar bands (MRCD, Ka, K, and X) the Uniden R7 can detect police laser guns (or LiDAR guns). The R7 also includes pre-loaded red light and speed camera locations, which is helpful if you are driving in a new area. Since the R7 is a higher-end radar detector, it also offers customizable voice alerts, an auto-dim function for the OLED display, auto mute, and overspeed warnings.

Let’s dive a little deeper into the individual features.

The dual antenna design provides true 360-degree protection as you drive. Integrated directional arrows (which light up on the OLED display) take the guesswork out of knowing where the threat is coming from, while the signal strength indicator lets you know how serious the alert is.

The strongest radar band is designated as the Priority Signal and its frequency illuminates on the OLED display. The other signals (threats) are indicated on the left side of the display. Two K bands, one X band, and one Ka band are being detected in the photo below. The red arrows indicate where the threat is coming from, while the multi-color rectangles indicate signal strength.

The Uniden R7 has a built-in GPS that helps eliminate false alerts. With the R7, you have the option of marking red light and speed camera locations, as well as locking out any unwanted alerts from stationary signals (like automatic doors at the grocery store). You can also mark threats when traveling to a new location, so you know where they are the next time you pass through.

Known as the Mute Memory feature, the R7 can store up to 2,000 points divided between this and user-marked locations. Use Mute Memory to silence any false alarms (like those persistent automatic doors). The easiest way to do this is by simply hitting the “mute” button on the power cord.

The R7 then remembers where you muted the false alert (via the GPS) and the corresponding frequency. It will automatically mute when you pass that location, and the saved frequency is detected; however, if a different frequency is detected, the R7 alerts you accordingly. Similarly, any Mute Memory points can be deleted at a later time.

The Uniden R7 operates in two different sensitivity modes: City and Highway. The City setting is on the lower end of the detection scale, which is ideal if you are driving around town or in traffic. City mode reduces sensitivity to better filter out any false alerts. Highway mode is the most sensitive and provides a more extended detection range for the open road.

The micro USB port on the right side of the unit provides a PC connection for different software updates. Uniden recommends that you update your R7 periodically via its official site.

What The R7 Comes With

The Uniden R7 comes with a 12V DC power cord with a RJ11 connector, USB cable, hook and loop tape for dashboard mounting, and an owner’s manual. A nifty neoprene sleeve and carrying case are also included.

We like how the Uniden R7 comes with two different windshield mounting brackets. There is a larger single suction cup bracket and a bracket with two smaller suction cups. For windshield mounting, Uniden recommends placing the R7 in the middle between the driver and passenger. Each time the R7 turns on, it will run a self-diagnostic test to check for faults.

Uniden R7 Versus The Competition

The Uniden R7 offers a solid array of features for the money, but it’s not the only game in town. If you are okay with something in the R7’s price range (about $480 on Amazon as of this writing), consider the Cobra DualPro 360. As the name implies, the DualPro provides 360-degree coverage, plus false alert filtering, Bluetooth connectivity, and a customizable display.

You can pick up the DualPro 360 via Cobra’s official website for $449.95, which is a little less than the R7. With the price difference, take a look at the Cobra/Escort Defender Database. It offers weekly updates of red light and speed camera locations, mobile cameras, and even air patrol zones. You can get a one-year subscription for $24.95, but the three-year plan is a better value.

If you want a radar detector that is less money than the R7 but not a complete base model, the Escort MAX 3 is a good choice. We had a chance to review the unit in 2020 and like how it works with Waze and other navigation apps to provide real-time alerts. On the other hand, if you don’t mind spending more than the R7, we recommend looking at the K40 Platinum 100. K40 offers a unique ticket-free guarantee with the purchase of every unit, something you don’t get with the Uniden R7.

If, after reading all this, you just want something inexpensive and “no fuss, no muss,” then we recommend the Cobra RAD 380. It’s easily the best radar detector on the market for under $100. However, if you are sold on the Uniden R7, click the orange Grab it on Amazon button below.

Grab it on Amazon