The 2017 Nissan GT-R is wickedly fast and wildly cool; nothing else in the Nissan library can keep up with such a machine – nothing with four wheels that is.

But we didn’t say anything about propellers.

Quick is a vast understatement for the pint-sized flyer – it hits 62 mph in just 1.3 seconds.

Both the GT-R automobile and drone showcase some innovative design and engineering. The GT-R car, for example, transfers power from its twin-turbocharged 3.8-liter 24-valve V6 to all four wheels; the GT-R Drone moves via four propellers mated with 2000kV XNova motors and Sky-Hero quadcopter frame, tuned to race specifications.

These attributes allow both to sprint on straightaways and slither through corners.

Table of Contents show
Drone vs. Automobile
Propellers vs. Wheels

Yep, we were wondering which would win. It was the most obvious question in our mind.

Nissan pitted the two against each other on a specially made, 1.2-mile course on the Silverstone Circuit in the United Kingdom. NISMO driver Ricardo Sanchez drove the GT-R and James Bowles, the 2015 British National Drone Racing champion, piloted the GT-R Drone.

The GT-R Drone easily launches past its automotive equivalent from a standstill, but when it comes to endurance, the GT-R car takes the title, with a top speed of nearly 200 mph. The GT-R Drone, by comparison, maxes out at 114 mph.

Still, speed isn’t everything. The GT-R car is silky smooth on the track but the GT-R drone has a turning radius of just 11 inches. Even with aerodynamic advancements and electronically controlled all-wheel drive, the GT-R car cannot match the drone’s agility and quickness here.

Find out how the race went in the video below. Both Nissan machines are featured this week at the Goodwood Festival of Speed. 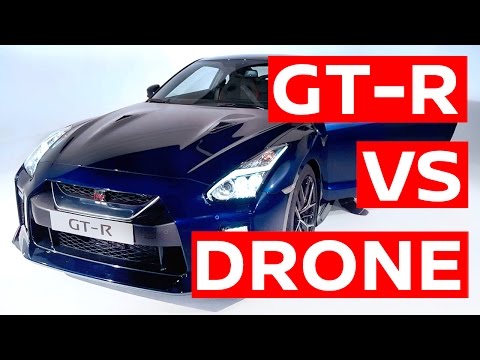