Providing an enormous treat to import supercar fans residing inside the United States in 2008, the GT-R’s first Nissan-approved migration to North American soil delivered a fantastic 485 horsepower performance punch. The halo car of the Nissan brand, some angelic magic is set to be performed on this Japanese dream machine in 2012 model year.

Paraded in Japan and Europe first (in fact, it is already available for purchase outside of the United States as of October), the new Nissan GT-R’s is due stateside as a 2012 model year offering. Few details for the US spec GT-R have been released before the LA Auto Show on November 17th. However, a view of the European-based model gives American fans of this lauded Japanese supercar an indication of exactly what will be unveiled at this event.

Enhanced with what appears to be minor exterior touches, the messaging of the 2012 Nissan GT-R is reduces the vehicle’s drag coefficient from an already tight 0.27 to a more slippery 0.26. A larger front bumper fascia features more fins which also includes the turn signals. On the rear side of the 2012 Nissan GT-R, an extended rear diffuser, larger quad tailpipe openings, and an exhaust cooling duct are noticeable changes all made in the pursuit of perfecting the supercar’s performance prowess.

The already athletic suspension and road-handling package of the 2012 Nissan GT-R is refreshed. Aiding from the additional rigidity of an aluminum-carbon composite strut supporting bar and a new support member inside the passenger side dash panel, the suspension geometry has been reworked for better steering and straight driving control. Improved Dunlop tires and new forged aluminum wheels show off the GT-R new potential in front of larger disc brakes. While rallying the 2012 Nissan GT-R’s handling response, the new wheel/tire look compliments the refreshed overall exterior within five layers, Hyper Blue Black Chrome wheel coloring now available. 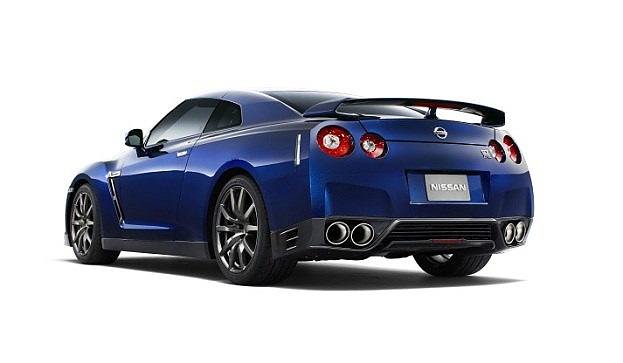 Showing some drastically more flooring performance numbers, the European version of the Nissan GT-R has received a bump to 523 horsepower (a 38 horse advance after the United States’ 2011 GT-R). Also flourishing with 21 additional foot-pounds of torque for a total of 451 units, new emission, and engine electronic controls can be credited for the gain in performance. The 2012 Nissan GT-R engine is not the only drivetrain component receiving attention. The all-wheel-drive ATTESA-E-TS control has been reconfigured with a SAVE mode replacing the Snow mode setting that augments torque and gear shifting for better fuel economy on highways. On the flip side, R mode controls the GT-R’s launch from a standstill as the twin-clutch transmission begins to filter through gears. A final addition to the drivetrain control of the 2012 Nissan GT-R is a two-wheel mode that activates under speeds under 6 miles per hour, helping the supercar complete tighter turns.

The 2012 Nissan GT-R’s interior maintains a solid matte finish. Interior panels, air conditioning outlets, and operating switches are all black in detail. Though the matte black interior could dull senses by itself, Nissan added a series of exotic details encompassing a racecar appearance. Magnesium steering wheel-mounted paddle shift levers, carbon on the climate control panel, and chrome-plated duct accents bring out high-performance charm. As a no-cost option, GT-R buyers can choose to ride in Recaro Black buckets or a set of premium grade leather seats.

Showroom-ready for North America starting in early next year, the 2012 Nissan GT-R should not fall far from the current price tag, just above $80,000.