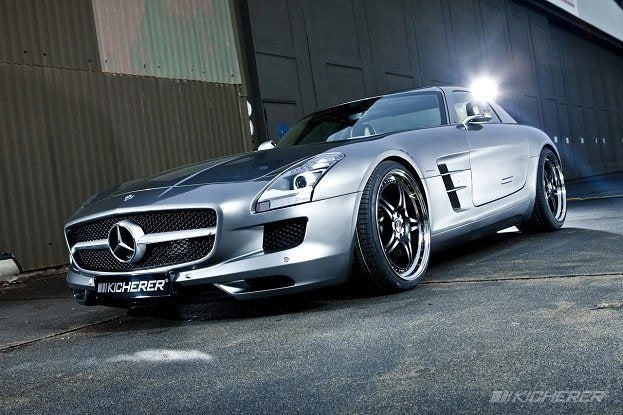 Despite the Mercedes-Benz SLS AMG being an accomplished supercar in factory trim, aftermarket performance outfitters have been fascinated in exploring the deeper reaches of the gull-wing door masterpiece. German-based tuner KICHERER Fahrzeugtechnik is becoming the newest addition to the crowd modifying the SLS AMG.

Founded in 1976 as a distributor for Alpina-tuned BMW models, KICHERER Fahrzeugtechnik would eventually go into the German aftermarket performance business with their own image. Defecting from Munich to Stuttgart, KICHERER’s engineering magic on Mercedes-Benz through performance parts and full vehicle customization. Vehicles benefit from the full treatment has included the SL-Class, G-Class, and even the SLR McLaren to shine brighter.

Beating KICHERER Fahrzeugtechnik to the punch for customizing the SLS AMG, Brabus introduced a Widestar conversion package late in 2010. While the Brabus Widestar added carbon fiber aerodynamic add-ons, The KICHERER SLS 63 Supersport is a far extensive modification of the sub 4-second supercar.

Starting with gentle carbon fiber touches, KICHERER reimagining of the Mercedes-Benz SLS AMG body accented with a front spoiler lip and rear diffuser fins. Besides the static enhancements made to exterior presentation, the greatest feature of the KICHERER SLS 63 Supersport is the dynamic action provided by the so-called “Electric Wings“. Making the trademark gullwing passenger doors more remarkable, KICHERER has rigged an electric drive motor between the hinges allowing the SLS 63 Supersport to offer effortless entry and exit to occupants. These electric gullwing doors open either by button or via a remote control. Complimenting the outside appearance, the KICHERER SLS 63 Supersport adds carbon fiber pieces to the two-seat interior. 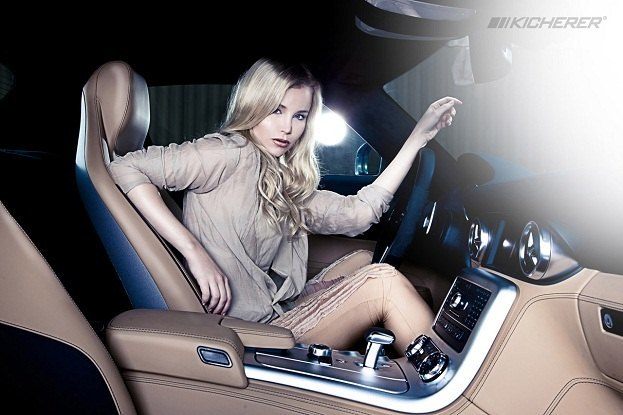 Another action-based feature fitted to the KICHERER SLS 63 Supersport is the lift-up threaded sport chassis. The KICHERER adjustable ride height system, produced in conjunction with KV Automotive, can elevate the supercar 30 millimeters (1.18 inches) for less obstructive travel over less ideal terrain. When road conditions are more apt to unleashing performance driving, a press of a button lowers the vehicle back to optimum handling height. Improving on the work of AMG, KICHERER moves the supercar with limited edition forged wheels. Three-piece 20-inch front and 21-inch rear wheels, the KICHERER SLS 63 Supersport is matched with wider than stock Michelin Super Sport tires.

KICHERER performance enhancements cranked up the 6.2 liter V-8 AMG-built engine to 602 horsepower. Larger air intakes and a stainless steel sports exhaust system with back-pressure flag control play a pivotal role in opening up the Mercedes-Benz SLS AMG’s performance potential by 39 horsepower. Torque production with the KICHERER SLS 63 Supersport is granted a noticeable bump also as a total 494 foot-pounds is a 14 point improvement over the stock SLS AMG specifications. KICHERER has not presented any official performance numbers on the SLS 63 Supersport, acceleration is likely to best the 3.6 second 0 to 60 mile per hour time of the stock Mercedes-Benz supercar. Depending if the 197 mile per hour electronic speed limiter is removed from the SLS AMG, 200 mile per hour top speeds may also be in reach in this KICHERER-tuned car.

The collection of all these before-mentioned tuner equipment to the SLS AMG supercar leads to the proud declaration of KICHERER’s ‘Supersport’ certificate.