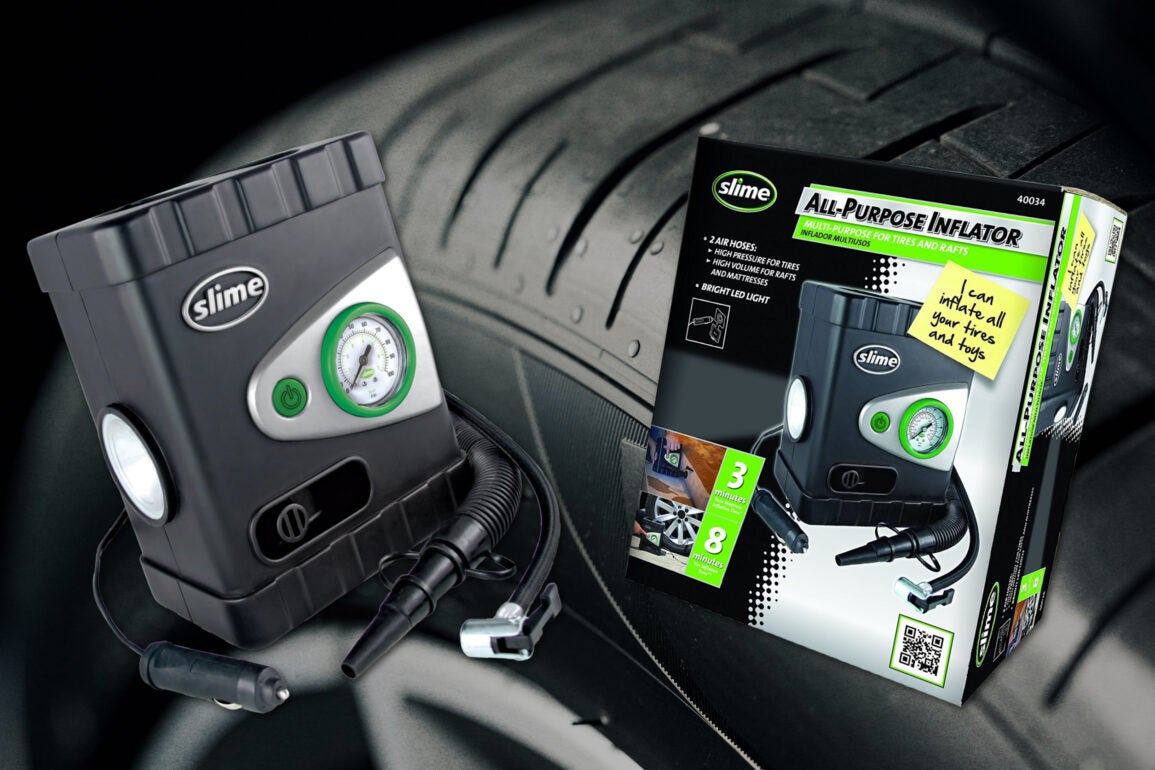 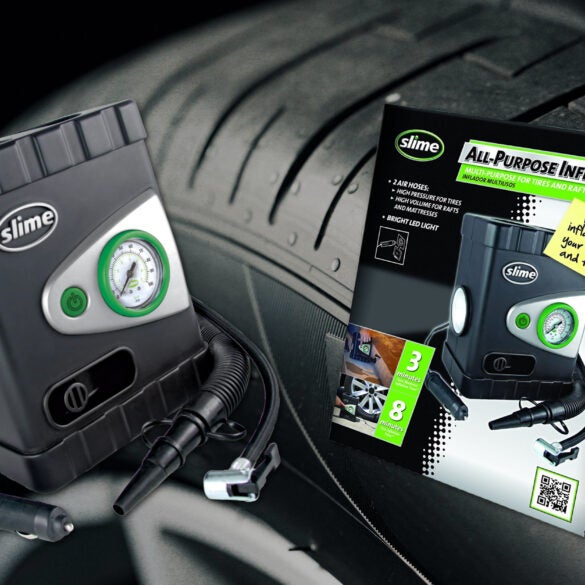 Like a portable jump starter, keeping a small air compressor in your vehicle can be a lifesaver. Here in Michigan, one of my tires will inevitably be low during the winter. These pesky bead leaks trip my TPMS light every few days until I can get the tire repaired properly. Rather than slug quarters at the gas station to air up, I decided to buy a little Slime inflator.

The Slime inflator featured here (called the “All-Purpose Inflator”) only set me back $37 on Amazon. I bought it with no intention of writing a review, but instead to have on hand with winters being so rough in Michigan. Since getting it, I’ve used it twice for my car and four other times between friends and family. I’ve been happy with the performance of this little Slime inflator and would be okay recommending it to our readers.

It’s pretty much ready to go right out of the box! The storage compartment on the back of the unit houses the 12V power cord and two air hoses: a high-pressure one for tires and a high-volume hose for things like rafts and mattresses (a needle is also included for balls). Next to the green on/off switch is a PSI and BAR gauge (zero to 100 for PSI and zero to 7 for BAR).

The 12V cord plugs into the accessory power source (i.e., cigarette lighter) on your center console or dashboard. The power cord is 10 feet long. That should be enough for the average sedan or crossover by the time you drape the cord out the window or door so the inflator can touch the ground. From there, you should be able to reach all four tires easily.

The only caveat is if you own a larger SUV, like a GMC Yukon or Ford Expedition. You can use the power outlet in your center console or on your dashboard for the front tires, but it likely won’t reach the rear tires. If you have a power outlet in the rear cargo area, use that for your back tires. The actual high-pressure air hose will also give you an extra two feet.

Inside the 12V power cord is a fuse. If the Slime inflator stops working, unscrew the top of the cord and replace the fuse.

An LED light on the front, consisting of four smaller bulbs, automatically turns on once the Slime inflator has power. Although it’s best to have a separate LED flashlight in an emergency kit, the light on the inflator will help you at night if you need to refill a low tire.

The inflate portal under the power button is for things like rafts and air mattresses. Attach the high-volume air hose to the portal, and you can fill up your giant rubber ducky pool inflatable.

Slime says the All-Purpose Inflator can fill the average tire in about eight minutes (however, it’s quicker if you use it right after your TPMS light comes on, which is preferable). The unit is loud once you turn it on, so it may vibrate and rattle around a bit. I recommend keeping your hand on it while filling your tires. Furthermore, put your vehicle in its accessory power mode versus having the engine run to supply power to the Slime inflator (this is an old safety trick I picked up working at an express lube when I was younger).

If your tire is totally flat, it may have separated from the rim. If that’s the case, jack up your car slightly before using the inflator. Otherwise, air will continue to leak out as you fill the tire.

Cheap insurance against the inconvenience of a flat tire or bead leak. The 12V cord supplies instant power so you can refill a low tire right where you are parked. An LED light assists with flat tires at night.

As a bonus, the Slime inflator comes with a separate air hose for mattresses and rafts.
Grab On Amazon

Is The 12V Slime Inflator a Good Buy?

Although you have to be a Tetris champion to put the power cords and air hoses back in the storage compartment each time, the Slime All-Purpose Inflator is easy to use. I bought it on a whim because it was inexpensive, but I’ve had good luck with it since. As of this writing, it’s available on Amazon for about $37.