The Insane Radical RXC will Destroy Your Face

Automoblog Staff
Car NewsMagazine
Home
Car News
Table of Contents show
Why is this one different?
This thing looks crazy
So…how can I touch one?

See that car up there? That’s the new Radical RXC, a crazy little car that weighs just a bit under 2000 lbs but packs a whopping 380 horsepower. Looks right at home on the racetrack…but it’s street legal.

Historically, Radical have built kick-ass little cars meant for the track, or sometimes track cars that happen to be able to be taken on the road, if need be.

For the all-new Radical RXC, they’ve taken it to the next level.

Why is this one different?

For starters, the RXC is the company’s first ever enclosed car. And for a car that you can drive on public roads, that can be a big deal. You know, the whole “inclement weather” thing. Oh, and safety too, I guess. Plus, with an enclosed cockpit they finally took their opportunity to give a car gullwing doors. And who doesn’t love gullwing doors?

But here’s the really interesting part: they’ve taken the 3.7-liter V6 from the new Mustang and dropped it into the RXC’s tiny frame…but not before boosting the horsepower up to a healthy 380 and giving it 320 lb-ft of torque.

If you’re really nice and ask politely (and cough over the cash,) they’ll replace the V6 with a 3.0-liter V8 that somehow manages 480 hp. Not bad for a company that usually fits their cars with engines meant for motorcycles.

For both engines, you’ll get their custom seven-speed paddleshift gearbox that knocks out gears in an F1-like 50ms.

All this gets you a blazingly fast street- and track-monster that will knock out 0 to 62 mph in only 2.8 seconds (that’s quicker than a McLaren P1) and hit a 175 mph top speed (not quite as fast as the McLaren.) We’re not sure about the V8’s performance specs.

You’re right, it does…and it is.

In fact, the body, which is a mix between composite and carbon fiber panels, is designed in such a way that provides 900 kg (1984 lbs) of downforce at speed. Why is that crazy? The car weighs about 900 kg. See where I’m going with this?

Technically, if you were going fast enough and had a loooong tunnel…you could drive the Radical RXC upside-down. Now, who’s up for testing this out? Anyone? Bueller?

Take a look at this video where the lucky bastards over at XCar took the RXC out for a spin: 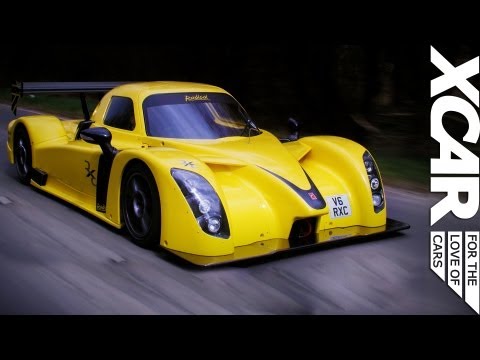 So…how can I touch one?

If you’re in Europe, the Radical RXC will be on display at Salon Privé in London at the beginning of September, which you should definitely try to attend.

Otherwise, you can not only touch one, but drive one, if you fork out £250 (currently $383) and happen to be around when they run one of their trial days at various tracks around the continent.