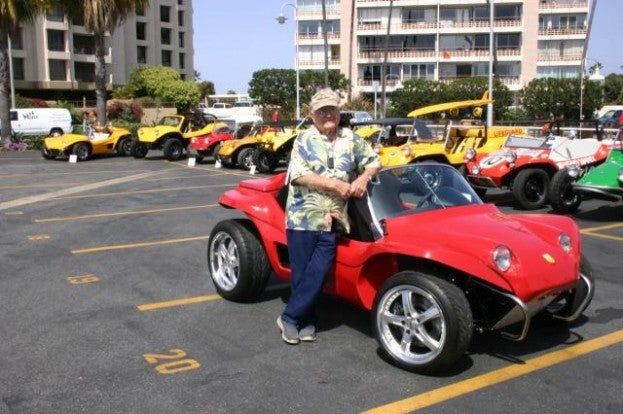 The most defining automobiles created have always found ways of moving us across terrain in a way never before possible. The Ford Model T succeeded in moving millions in a reliable, affordable manner. In the second world war, the original Jeep carried soldiers through mud and over rocks deemed otherwise impossible with other vehicles of the day.

In 1997, the Thrust SSC became the first car-type vehicle to penetrate the sound barrier. While some remarkable automobiles are remembered for gigantic feats, some cars gain significance among a diehard crowd. 50 years ago, the Meyers Manx buggy would become one of those vehicles.

Reminding the dune-conquering wheelman and wheelwoman of the legacy of Bruce Meyers’ original pioneering premise, the Manx V prototype features a modern-day twist by being electric powered. Sourcing its electric propulsion system from Rev-TEC, Meyers Manx’s new 1,714-pound prototype is a two-seat that remains true to the heritage of 50 years before. Built on a formed and tubular welded steel chassis, a sporty, off-road stature allows the Manx V to ride with six inches of ground clearance. The Rev-TEC supplied powerplant of the Manx V96 features a 83.6-horsepower polyphase AC induction electric motor feeding from the energy of a lithium-ion battery. Geared for the Neighborhood Electric Vehicle (NEV) category, a production version of the Manx V would be a low-speed, street legal car. While the specifications for the Manx V96 prototype indicates the vehicle is capable of traveling at a top speed of 62 miles per hour, the NEV classification would limited between a vehicle’s speed from 25 to 45 miles per hour (depending on where in the United States the NE). Electric vehicle manufacturer GEM that now operates under Polaris Industries is similar to the concept of the Manx V. A popular conversion using parts from a Volkswagen Beetle, the first off-road vehicles known as the Manx were born in 1964 as a tamer of desert dunes that could also be driven on the streets. Featuring a distinct fiberglass body and structure, the Manx’s appearance was cleverly simple. Adjustable air lift spring suspension and large balloon tires allowed the Manx buggy to sail through the deserts of Baja powered by the small, air-cooled engine of a VW Beetle.

Similar to the events following the success of Carroll Shelby’s AC Cobra, numerous companies began imitating the Manx buggy design. Bruce Meyers attempted to guard his design through legal means but I wound up with the court ruling against him. Unable to produce the Manx buggy body under protection from strikingly comparable rivals and crippled by other financial issues, B.F. Meyers & Company was forced out of business in 1971. Since 1999, a Bruce Meyers and his wife Winnie has operated their current company (Meyers Manx) offering a continuation on their original kit car theme.

The Meyers Manx company has nicknamed the V prototype “New Red” as a reference to the first-ever VW Beetle-derived version of the Manx dune buggy called “Old Red”.