Kinivo: A Bluetooth Device With Drivers In Mind

We all know texting and driving is stupid, but what about playing music and answering calls on the road?

We’ve all been there.  Phone in your lap, go around one sharp corner…and it’s lost in the dark inescapable caverns of quarters past between the seat and center console, to dwell with the long lost nickels and french fries of yesteryear.  Even if you have a audio jack plugged into your cell it doesn’t help this situation.  Throw a manual transmission into the mix and you’ve got yourself a conundrum.

Well Kinivo gave me their answer to this problem to try out for myself: a hands-free device, the BTC450, so I did!

Straight away I noticed something.  The Kinivo BTC450 really only works if you have a built-in aux-in audio jack.  You could use a tape deck adapter, but you’d need a 3.5mm female adapter to connect the aux-in and aux-out plugs to each-other.  Yes…more of a pain than it’s worth.

Also if you have that awkward year of car that’s too “modern” and cool for a tape deck, yet not advanced enough for an aux-in jack, then you’re pretty much screwed. 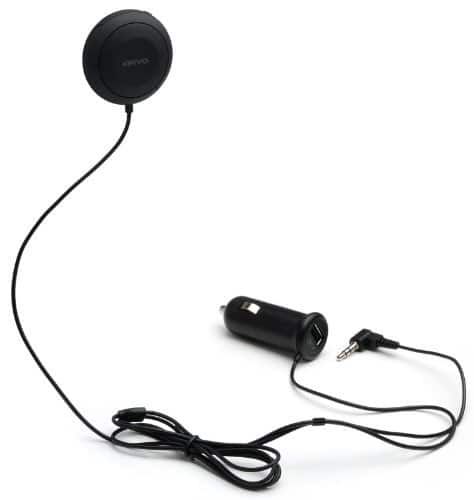 If you do have the aux-in jack, it’s really useful.  First of all it’s Bluetooth, so there’s no need for your phone to be plugged into anything.

Stick it in the cup holder or in the center console.  Every function can be operated using the “control disk” as I like to call it (see pic below.) The central button is called the “Multi-function button”. If you have a call coming in, just press the button and it answers for you.

You can communicate through the device just like a Bluetooth ear piece, so there’s no need to hold the phone up to your mouth or in your lap, and their voice is piped through the car’s speakers.

Use the same button to answer or hang up.  Double tap this button and it calls the last person you called.  Hold the button down and it will either take you to Siri, or your voice command if using an android.  That way you can use voice command to call or text without your hands ever leaving the wheel, gearshift, or E-brake…depending on what type of driving you’re doing. Convenient right? This same button acts as the play and pause, and there are “previous” and “next” buttons on the control as well, so there really is no need to ever touch your phone!

Just use the provided adhesive pad to stick the control wherever is most accessible for you.  The car jack that powers the hands-free kit also has a built in USB so you can charge your phone as well.

Overall, it’s simple to use, extremely convenient, and makes for safer driving.  I also just discovered they’re on sale at Amazon.com for $44.99, $15 off the regular price! You’re welcome, world.