The Kia Trail’ster is an amusing concept that has real production potential and perhaps in a year or two, would steal significant market share from competitors. This concept lacks nothing. It is  good looking, has decent space, great build quality and an electronic all-wheel-drive system.  Kia unveiled the concept recently at the 2015 Chicago Auto Show.

Most importantly it also has fan base: anybody who wants a small, fuel efficient off road vehicle will find it valuable.

This is a winner because Kia is taking something already fundamentally good and making it very close to great. Going semi electric, with a small lithium ion battery pack, enables the Kia to increase miles per gallon; in the neighborhood of 20%.  This brings the overall MPG to 30, even with the AWD capabilities . It also provides a great torque boost from the second your boot touches the peddle. The electric all-wheel-drive system provides halfway decent towing capacity too and the ability to carve through several inches of snow.

The Kia Trail’ster is not only great for suburban streets but is now one of the best micro, urban assault vehicles you will be able to buy.  Most welcome will be the practicality of a greatly increased right height of several inches, although the final lift determination will come about prior to release on the street.

Overall, however, the looks and technology seem production ready.  Produce it; I am sure they will, increasing sales worldwide by a healthy margin for this type of vehicle.

The buzz around the 2015 Chicago Auto Show proved this was a winner, not only for Kia, but for small vehicles everywhere. The raw numbers are: 1.6-liter turbocharged, four-cylinder with 185 horsepower and 185 pound-feet of torque.  That pairs with a six-speed automatic gearbox giving a conventional front drive style setup. The rear however has an electric motor churning out 35 hp and 100 lb-ft of twist using a 1.2-kWh lithium-ion battery.

The whole system produces a combined 220 hp and a small stump pulling 285 lb-ft of torque.  Kia has taken something that is good and improved upon it in a meaningful way.

Below is a video of the Kia Trail’ster unveiling at the 2015 Chicago Auto Show.  What do you think?  Tell us here! 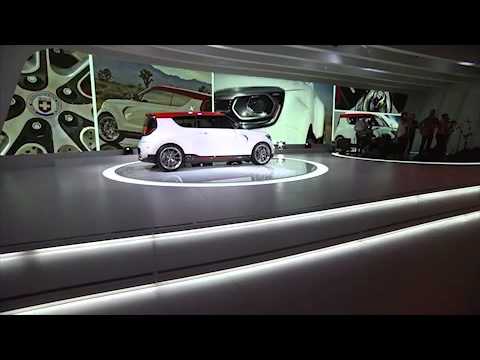