photo thanks to MazdaUSA

How Does a Rotary Engine Work?

If you’re familiar with the Mazda RX-8 (or RX-7,) you know it’s one of the only cars on the road using a rotary (Wankel) engine. But have you ever wondered exactly how a rotary engine works? Why is Mazda the only manufacturer still using this design? What are its advantages and disadvantages? Is it really as unreliable as its reputation suggests?

First, check out the video below showing how a Wankel rotary engine is assembled and how it runs: 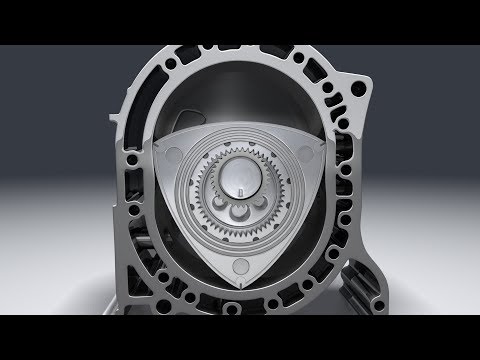 Although the rotary design has been around for decades, only Mazda uses it in any mass numbers.

If you read our 2010 Mazda RX-8 Review, you’ll notice we are big fans of the 1.3-liter engine’s technical and performance capabilities.

The rotary’s ability to produce 232 horsepower from only a 1.3-liter displacement is impressive, and the lightness of the engine helps it become one of the best handling cars on the road. Another great feature is its 9000 RPM redline and smooth, linear power delivery.

Another advantage to the rotary engine is that it has fewer moving parts than a comparable piston engine. Fewer parts and a smaller size allow a lot of power to be packed inside a small package.

Finally, the Wankel rotary engine is less prone to catastrophic failure. When a piston engine loses compression or oil pressure, it often seizes or breaks down in a large cloud of smoke.

A rotary engine under the same conditions will simply lose power at first, giving you time to drive to the nearest garage.

While the engine in the RX-8 has an impressive 232 hp from such a small package, it’s unable to produce much torque, which is that off-the-line oomph we all love to feel.

Sadly, the Wankel lacks in torque (only 152 lb-ft.) To keep it running fast, it’s important to keep the RPMs close to the 9000 RPM redline. While it’s definitely fun to drive a high-revving engine like this, the higher RPMs also mean that it’s going to be more prone to breaking down over time.

Although the rotary is efficient in terms of horsepower, it’s awful in fuel economy. The 2010 Mazda RX-8 we reviewed had EPA ratings of 16 mpg city, 22 hwy, which is more than many competing V8 piston engines. We hovered closer to the 16 mpg range when we had it. Ouch. That alone keeps many people from buying the car.

Interestingly, rotary engines burn a small amount of oil by design (to preserve the seals,) requiring the owner to periodically add a little bit of oil. Not a big deal in road-going cars, but worth a note.

One of the biggest disadvantages to rotary engines is their proneness to fail. While the likelihood of going up in a big puff of smoke is rare, owners of Mazda RX-7s and RX-8s commonly complain about engine problems. In the RX-8, Mazda fitted their Renesis rotary engine which is a huge improvement over the old design, but is still prone to failure.

For decades, the piston engine reigns supreme in powering vehicles, be it from gasoline or diesel. The rotary engine isn’t taking its place any time soon, but we are beginning to see more competitors in the field.

Electric powertrains are really gaining steam, and some one-off concepts might actually see the light of day such as the incredible Maxforce engine, powered only by magnetic force. Expect to see more articles about other engine designs in the near future.

Just like anything else in the world, we just showed you that there are many pros and cons to the rotary engine.

The infographic below intends to defend the rotary, giving some advantages over its piston-pushing counterpart.