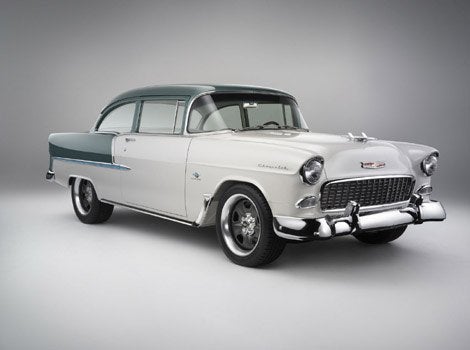 Since yesterday’s Ford street rod was so well received, I think it’s time to give Chevy their due. The General Motors division, in addition to bringing along a raft of custom Camaros to this year’s SEMA show, also produced along a rather tastefully done up 1955 Chevrolet Bel Air with an attractively finished LS3 crate motor dropped into the engine bay.

Interestingly, this is not about the Bel Air, but it’s more about that LS3 crate motor.

To build up some hype and press interest about GM’s new line of relatively greener and more fuel efficient crate motors GM has dubbed ‘E-Rod’, Chevy prepped a very nicely turned out 1955 Chevrolet for the SEMA Show.

The fully restored Bel Air has a 6.2-liter LS3 V8 E-Rod mill under its 54 year old hood that puts out and impressive 424 lb.-ft. of torque. The E-Rod LS3 package, which does not include a transmission, or an exhaust system behind the catalytic converters, lists for $9,375. Which is actually pretty reasonable, considering how potent a package you’re getting.

Jamie Meyer, product marketing manager for GM Performance Parts, had this to say about the General’s latest: “With the E-ROD system, you’re getting 160 percent more horsepower than the original small-block V-8 offered in 1955, but with emissions performance and efficiency that wasn’t even dreamt of half a century ago.

This is how modern hot rods will be built.

They’ll have the efficiency of a modern GM high-performance vehicle, be environmentally conscious and emissions-compliant – all while providing the owner with a smaller carbon footprint,” he added.

The E-ROD engine, which is sold as a kit, and is the same, basic LS3 engine that’s found in the Camaro SS and Corvette. If the LS3 is not exactly to your liking, you can also choose the LS7 or the LSA plants, which are planned for future packages. The LS3 kit carries part number 19244805.

The kit bits include:

There’s a bunch of other bits and bobs you’ll have to get as well as a front-end accessory drive system that is suitable to your chosen vehicle.