Goodyear’s New Blimp to Take Flight as Wingfoot One

Whenever we look at the sky at any major sporting event, the name Goodyear has become a common sight as a floating billboard. The Goodyear Blimp is one of the most iconic marketing vehicles introduced in the last century. The airship is ranked equally with the Oscar Meyer Wienermobile as a moving advertisement no one really tired of seeing. Whether it is the Daytona 500, Super Bowl, or watching a film such as Al Pacino’s Scarface, the Goodyear Blimp fleet has flown into our popular culture. Later this summer, Goodyear will officially launch a new generation of their popular flying billboards.

The all-new Zeppelin NT LZ N07-101 model airship has been undergoing testing by Goodyear since March 2013, lacking one important item; a name. To obtain the title for their newest craft, a “Name the Blimp” contest took place earlier this year, allowing United States residents to pitch a name for the airship. With 15,000 names submitted, 10 finalists were selected for public voting. A name credited to Charlotte White of the tire maker’s home of Akron, Ohio, Wingfoot One has been declared the latest moniker to be part of Goodyear’s long-running fleet. A reference to the company’s trademark since 1901, originally conceived from the Roman god Mercury, Wingfoot is also the name of the lake where the current blimp is housed. 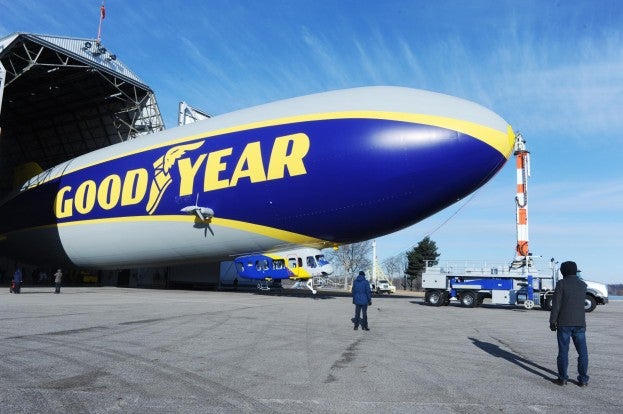 Much like the brand’s tires, enhanced technology has allowed Goodyear’s Wingfoot One to reach new performance potentials. Featuring a larger overall size and a bigger passenger cabin than the previous airship, Wingfoot One is a state-of-the-art version of the helium-filled vessel. At 246 feet long, the passenger gondola can hold up to 12 passengers and even features a washroom (something the older Goodyear Blimps lacked). The new blimp boasts a semi-rigid structure unique to the Goodyear fleet. The improved structure and enhanced avionics will make the blimp one of the most maneuverable and stable of any airship used.

Through electronic and computer controls, Wingfoot One can essentially park itself in the air remaining in a hover position. This will make Wingfoot One an even more enticing platform for filming overhead shots at events. Wingfoot One, propelled by three engines, presents a maximum cruising speed of 73 miles per hour (13 miles per hour faster than the current fleet). The new Zeppelin airship’s appearance will remain traditional to the Goodyear fleet with a blue, yellow, and silver color scheme. Wingfoot One is the first of three NT LZ N07-101 vessels Goodyear will deploy over the next four years.

Associated with advertising tires, the Goodyear Blimp was originally created as more of an active display of the company’s technology. During the early 20th century, Goodyear produced their own airships. Starting in 1924, Goodyear jointly constructed blimps with Zeppelin. Shortly after constructing the Goodyear Zeppelin Corporation’s first Type AD airship, the company began using it as a flying billboard. Next year, Goodyear will enter 90 years of blimp advertising first flown on a ship called Pilgrim. One of the last airships constructed by Goodyear itself was known as the Spirit of Akron. With the arrival of the new Zeppelin vessels, Goodyear is retiring the GZ-20 class airships that have flown since 1969.

Wingfoot One, the newest vehicle to carry on the Goodyear Blimp legacy, will be properly christened next month in a ceremony.