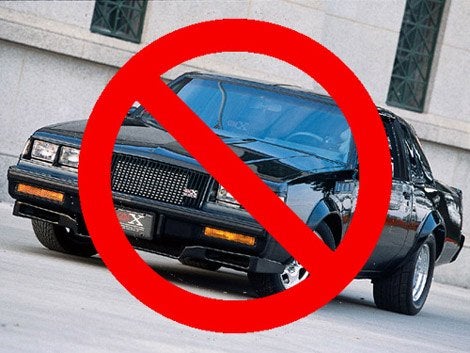 Yes, yes, I know: Austere times, not enough money to go around all that, but really GM, I think it’s possible to have a little bit of fun, even in 2009. Not that the original Buick GNX was a little fun. It was a LOT of fun, at least if you think lots of power and torque come first and handling and braking came in after that.

So making a modern version of the GNX? Sounds like a great idea to us.

Back in the 80s, Buick had the great idea of putting a blown V6 (turbo six, actually) into a fairly mundane Regal bodyshell. At the time, the best performing Regal you could get was in the hands of stock car guys like Darrell Waltrip. It was par for the course at the time: Kind of square shaped and not that quick, it was one of the last cars you would expect to be turned into a real performer.

But that’s what happened. My friend Carl, who grew up in Detroit, the son of a guy that worked at Buick, and long time ace mechanic, said at the time: “I drove a GNX the other day. They’re quick. I mean like Grand Sport quick.”

And that was all I needed to hear. I had another friend, Suze, who owned one for years, and she said the worst thing about the car was it’s black-on-black-on-black color scheme; “You gotta wash it constantly,” she said. As a matter of fact, she was so impressed by that facet of the car, that she founded her own car club, The Black Car Club. All you had to do was own a black car. The calling cards, which were flat black lettering on a gloss black background, read simply:

The Black Car Club
No Meetings
No Dues
Not Time, we’re too busy washing our cars.

Anyway, apart from the Vette, what sort of fun cars in GM making these days? Yeah, my thoughts exactly. So really, how much of a no brainer would it be to take the current Buick Regal platform, and cram in an appropriate engine and make a modern version of a GNX?

It would seem that it would be too much to ask.

Over a web chat, GM President Fritz Henderson said that although Buick fans would “like what you see in future Regal alternatives” a GNX would not be in the offing.