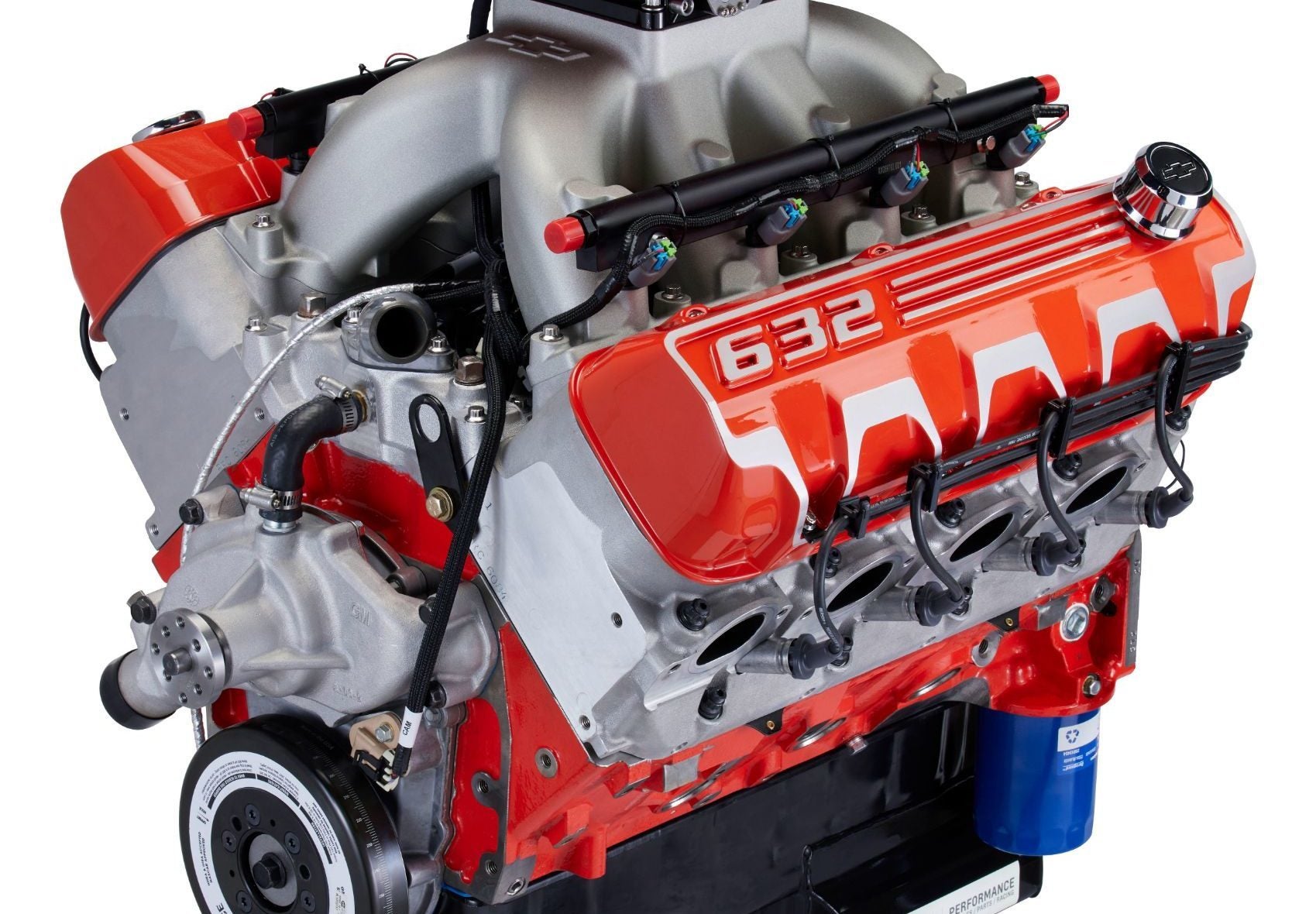 “Big Chevy Engine!!!” said the press release in so many words. That’s odd, I thought; Chevy’s kind of a buttoned-down company, what on Earth could make them crow like this? Then I read the figures. After I regained consciousness (I think I struck my head on the edge of the desk before hitting the floor), all I could mutter was, “Big Chevy Engine!!!”

There are two big numbers here. The first is 632. That’s the displacement of this new monster V8 plant from The Bowtie Boys: 632 cubic inches. That’s over 10-liters. That’s big. But that’s not the really big number. The really big number is 1,004. That’s the horsepower output. Over a thousand! Add to that the 876 lb-ft. of torque, making the naturally aspirated ZZ632/1000 the largest and most powerful crate engine in Chevy’s history.

“This is the biggest, baddest crate engine we’ve ever built,” said Russ O’Blenes, GM Director of the Performance and Racing Propulsion Team. “The ZZ632 sits at the top of our unparalleled crate engine lineup as the king of performance. It delivers incredible power, and it does it on pump gas.”

Pump gas, I thought? What’ll it do on race gas? What’ll this thing do on AV gas? And then my mind really started racing. How strong is the bottom end? How much compression can it take? How big of a blower can it take? What are the block dimensions, and can you fit it into a Gen 1 Nova? Then I calmed down and realized I had to finish writing this. I can call my drag racing friends later.

The Chevrolet Performance ZZ632 Crate Engine reaches peak power at 6,600 rpm and revs to a max of 7,000 rpm. The torque peaks at around 5,600 rpm, giving a reasonably tight but useful power band to work with. Then again, something tells me you’re not going to be using the ZZ632 running up and back through the gears on your fave mountain road. Something tells me the scenario will be more like “Green light! Nail it!”

Now check the nitty-gritty on the fueling and head design. Gas is delivered by eight-port injectors with the engine breathing through CNC-machined high-flow aluminum cylinder heads featuring symmetrical ports. These RS-X Symmetrical Port heads are named for powertrain engineer Ron Sperry. Yes, that Ron Sperry. The guy who designed them for Chevy’s iconic Small Block V8 with the Gen III LS1 engine that debuted in the 1997 Corvette. And while Big Blocks have traditionally been designed with variations in port shape from cylinder to cylinder, all eight intake ports of the ZZ632 have the same length, volume, and layout.

Likewise, all of the ZZ632’s exhaust ports are identical. This symmetry ensures individual cylinders all produce similar power. It also assures (if you’re thinking ahead) easier tuning when it comes to high-volume race fueling systems.

The block of the ZZ632 is cast iron, which is a shame, weight-wise, but I bet an alloy block would have blown apart by the 100-foot mark. The interesting thing about the ZZ632’s block architecture is that it shares a mold with the Chevrolet Performance ZZ572 crate engine. Chevy punched the bore by 0.040 inches over the 572, and then they stroked it by 0.375 inches.

To provide clearance for that long-stroke, engineers modified both the block and connecting rods. Four-bolt main caps and a forged rotating assembly ensure strength and durability. During development, a single engine endured more than 200 simulated drag strip passes on a dynamometer.

The Chevrolet Performance ZZ632 Crate Engine will be on display at the 2021 SEMA Show in Las Vegas, starting on November 2nd. Chevrolet Performance dealers are expected to receive deliveries in early 2022, which means that SEMA 2022 will be lit! In the meantime, check out the full spec chart below. I gotta calm down, then call up a buddy of mine down in Woodburn.