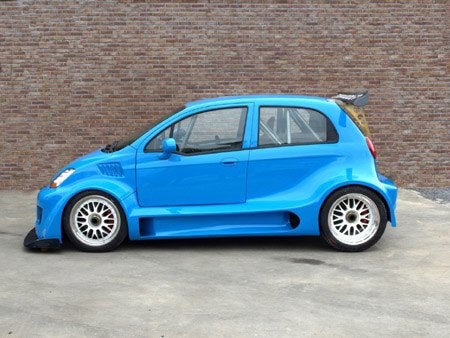 OK, how cold I let this one slip by? What we have here is a Chevy Matiz (a tinny Euro market sub-compact) that someone decided to cram, not just a V8 into but a big, whompin’ stompin’ Corvette Z06 V8 Engine that cranks out 505HP.

Oh, and said lunatic is French. Is that a reason, or an excuse?

This mutant Chevy Matiz, all decked out in a nice shade of French racing blue, was done up by a fellow by the name of Yves Fourdin, who is the founder and owner of Fourdin Auto Sport. The car, which is apparently homologated for racing, has been fitted a stock 7.0-liter V8 engine from the Corvette Z06 that delivers an output of 505HP.

Even in a Vette that’s a bunch, in a car the size of a kitchen range, that borders on the too much. Borders … I’m still not sure what constitutes “too much power” in a car.

What could possibly go wrong?

Which I suppose is half the fun. From the stands. Safely watching/grinning. From the drivers seat it probably gives a whole knew meaning to the words “Complete handful” and “directional instability” and “barely under control”.

Here’s a video of the little brute testing at Monza (yes, THAT Monza), so it looks like Yves Fourdin and the gents at Fourdin Auto Sport are serious.