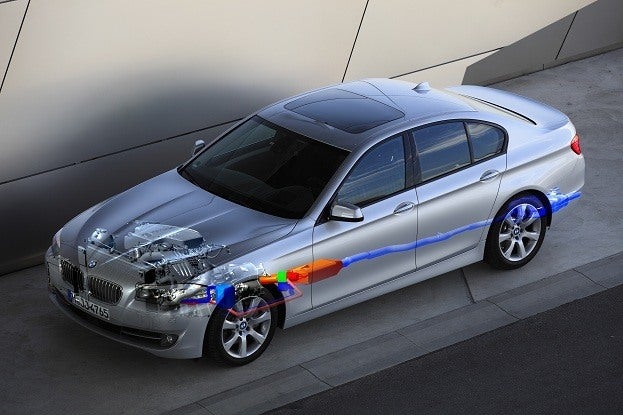 Historically, the steam engine is credited for being the main motivator for the industrialized world that has taken human kind to new greatness and understanding. Successful in powering locomotives for until many railway companies adapted to diesel-electric trains through the 1950s, steam power never achieved widespread acceptance among automotive customers. One of the potential powerplant suitors pitched during the infancy of the auto industry in North America along with gasoline and electric batteries, steam engines were vigorously campaigned by the Stanley Motor Carriage Company from 1902 to 1924. Losing trust in the marketplace for the first time during the 1920s, steam power was explored again in the late 1960s by General Motors. Never leaving the experimental stage, steam power as an individual power source for motion has been ruled out for road use.

Almost 50 years since the last serious study of steam power was abandoned, German car maker BMW is revisiting the older technology for application in the 21st century trend of hybrid power motoring. Revealed for the first time as a probable source for electric-assisted power, the BMW Turbosteamer project was initiated in late 2005. Drawing on fundamental steam engine principles and as well as working expertise gained through NASA, improved fuel economy and reduced CO2 emissions is the goal for BMW’s project.

Operation of the BMW Turbosteamer system depends on deriving power from the power plant’s wasted heat. Often a lost by-product in the internal combustion engine, the turbosteamer technology recovers heat through the engine’s cooling system as well as from the high-temperature exhaust gases. The engine-sourced heat is then collected through a heat exchanger that reacts with a special fluid. Subjected to high pressures, the fluid is heated to an extent it turns to steam. The next step in the turbosteamer technology is to direct the steam through a turbine used to generate electrical power. Of course, this electrical power could be used as or alongside a current hybrid vehicle system. As BMW developed the turbosteamer from the laboratory, the engineer’s main goal was compressing the hardware feasible for integrating into an automobile. Over the course of its development since 2005, BMW is now confident the turbosteamer system can be contained in a system weighing no more than 15 kilograms (33 pounds). According to laboratory studies of the turbosteamer technology, performance improvements from a four-cylinder engine was measured as high as 15 percent. Mating the technology to a BMW 5 Series sedan, BMW engineers predict the turbosteamer could provide up to a 10 percent boost in fuel economy through on longer distance drives.

An automobile company who had been a repeat offender of the CAFE standards placed on vehicles sold in the United States, BMW’s commitment to improve fuel economy has kept the German auto company clear of incompliance fines since 2006. Like all other automakers, BMW will be burdened with meeting all-new fuel economy standards making it necessary for the luxury brand to explore various avenues of performance advancements. Along with the Turbosteamer project, BMW’s attempt to find greater vehicle efficiency also stems into thermoelectric generation.

With BMW’s turbosteamer unit entering field tests, there is no clear indication for when or even whether this technology could be found in future vehicles.