Affiliate disclosure: Automoblog and its partners may be compensated when you purchase the products below.

Drivers in the Empire State may pay more than the national average for insurance premiums, but this doesn’t mean it’s impossible to find low-cost New York car insurance. In this article, we’ll recommend the top providers in the state based on price, customer service, and local reputation. We’ll also review state insurance minimums, state penalties for driving without insurance, and other facts about driving in New York.

Our review team has taken a close look at many of the best car insurance companies in the country. While there are differences in average premiums among states, there can be even bigger cost differences among individual drivers. If you’re looking for the cheapest auto insurance in New York, start by comparing free, non-committal quotes using the tool below.

To determine the best New York car insurance providers, we took a close look at the best providers nationwide and evaluated local offerings in the Empire State. While many of the top insurers maintain their quality no matter the state, regional reputation and customer service can vary.

In addition to cost, coverage, reliability, and customer service, our review team also considered the results of the J.D. Power 2020 U.S. Auto Insurance Satisfaction StudySM for New York. The study ranked companies out of 1,000 points, and each of our recommended providers performed better than the regional average of 836.

*Overall Ratings represent our team’s evaluation of auto insurance companies nationwide, while the order of providers in the table reflects recommendations specifically in New York. For this reason, you may see some providers listed above others with higher Overall Ratings.

Geico offers standard car insurance coverage options as well as mechanical breakdown insurance (MBI). The insurer is a leader in the industry and has a well-established reputation nationwide, including in New York. Geico currently holds an impressive A+ rating from the Better Business Bureau (BBB) and is rated A++ for financial strength by AM Best. This means it works well with customers and has a superior ability to pay out claims.

Geico scored 851 out of 1,000 points in the J.D. Power Satisfaction Study, placing it second in the state. This ranking is in line with high Geico customer satisfaction reviews in other parts of the country.

Geico is often one of the cheapest auto insurance options for many drivers. The insurer sets low premiums to begin with, and customers can save even more on New York car insurance by taking advantage of discounts such as:

The Geico claims app makes filing claims simple, and finding a repair shop is easy through the company’s Auto Repair Xpress® program. You can learn more about this insurer by reading our full Geico review.

We’ve named State Farm the Best for Student Drivers because of the many discounts the company offers to teens and college students.

State Farm received an A++ rating from AM Best, meaning it has the financial strength to handle and pay out customer claims. In addition to standard insurance policies, State Farm customers can purchase specialized coverage such as classic auto insurance and sports car insurance. Local customer satisfaction scores indicate State Farm is a particularly good choice for New York car insurance. In the J.D. Power Satisfaction Study for New York, State Farm ranked first with a total score of 851 out of 1,000 points.

The cost of State Farm can be slightly higher than competitors, however there are many discount opportunities such as:

Learn more about the provider by reading our complete State Farm insurance review.

USAA scored highest in the J.D. Power Satisfaction Study for the state of New York with 884 out of 1,000 points. The insurer typically holds the highest score for most regions in this study, but it is ineligible for ranking because it is not available to all drivers.

USAA offers some of the lowest insurance premium rates in the country and sells every standard type of car insurance and even coverage for rideshare drivers. USAA received an A++ financial strength from AM Best and is one of the best-funded insurers nationwide. Learn more by reading our full USAA insurance review.

As its name implies, New York Central Mutual (NYCM) is an insurer specifically in the state of New York. As such, it specializes in the needs of New York drivers, connecting people with the best local policies available.

NYCM ranked third in the J.D. Power Satisfaction Study, scoring 837 out of 1,000 points. It has an A rating from AM Best and an A+ accredited rating from the BBB. As with many top auto insurance providers, NYCM offers a range of discounts such as:

If you’re looking for a small-scale provider that offers personal customer service, New York Central Mutual is a good bet.

New York drivers are required to maintain liability insurance coverage at the following minimum coverage limits in order to apply for vehicle registration:

The penalties for driving without New York car insurance can be steep. They include:

While the limits mentioned above are the legal minimums, it is recommended that drivers purchase full coverage auto insurance to make sure they are fully protected on the road. This means obtaining policies for personal injury protection (PIP), comprehensive coverage, collision coverage, and uninsured/underinsured motorist coverage in addition to liability coverage.

New York is a no-fault insurance state. This means that after an accident, New York drivers typically file claims with their own insurance providers, regardless of who is at fault.

New York auto insurance costs a bit more than coverage in most other states. According to a report recently published by the National Association of Insurance Commissioners (NAIC), New York drivers paid the following average costs for car insurance premiums in 2017:

The national average for liability premiums in 2017 was only $611.12, which is much lower than what New York drivers paid. One reason New York car insurance may be so expensive is that New York is a no-fault state. No-fault states typically have higher car insurance rates. Another explanation could be the high rate of insurance fraud in New York. Fraud drives up costs for car insurers, which then trickles down to customers in the form of higher insurance premiums.

According to data from the Federal Highway Administration, New York drivers traveled a total of 123,510,000,000 miles in 2018. This averages out to 10,128 miles per licensed driver, a relatively high figure compared to the rest of the country.

However, while New York drivers put in more mileage than drivers in other states, they tend to drive more safely. The rate of accident-related hospitalizations has decreased in New York in the past 20 years, and New York had the second-lowest number of deaths per capita from fatal motor vehicle crashes in 2018.

New York can be a great state in which to drive. The countryside is beautiful year-round, and New York driving is quite safe relative to other areas of the U.S. But before hitting the road in the Empire State, make sure you carry the proper car insurance.

Of course, the only way to find the lowest-cost provider is to compare auto insurance rates for yourself, which you can do easily using the free tool below. 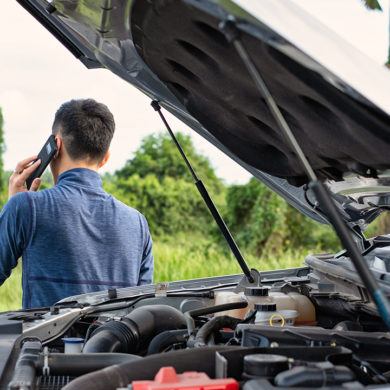