It’s that time of year, when every one of us slightly wishes we had a WRX or Evo.  If you think you don’t, just wait until the next blizzard.  While you’re hopelessly slithering and floundering around in your slush-covered Mercedes, a Subaru will come burbling right past in the most disdainful manner with an arrogant hoon behind the wheel.  Tell me you don’t feel trivial and somewhat covetous then.

So what better time of the year to unveil their new road going rally poster boy?  Subaru posted a little teaser on their website with a countdown to the reveal at the L.A. Auto Show, Nov 20th, 2013.  You can watch it live from the web page I’ve provided for you, how convenient is Automoblog, eh?  Here it is: L.A. Auto Show 2015 Subaru WRX Debut Live! Of course from the spy photos we’ve seen and the teasers it has completely toned down from the concept, which debuted at the 2012 N.Y. Auto Show, as it was quite stout and designed by J.J. Abrams…as all concepts are.  The actual production models have seemingly found new ways to be ugly and disappointing in the looks department with every new release.  Whereas its counterpart and “frienemy” the Evo has managed to look even more aggressive, although they haven’t done anything new since 2008. 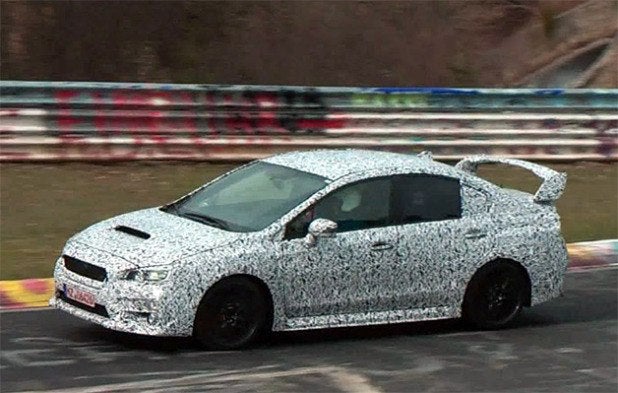 Aside from the hood intake and rear spoiler it doesn’t look very “rally-esque” does it?  It looks more like a Toyota sedan that has come out dressed with the accessories of a performance car.  Let’s just hope it stayed affordable, and finally gets to the 330 hp range…for their sake.

There is one issue that Subaru has regrettably ignored that must be solved: they need to fix the understeer. It’s been a big selling point for the Evo.  It’s counterpart has never had a problem kicking its arse out a bit on dry pavement, and as all gearheads know, oversteer is more fun than understeer.  Nobody wants to have a rally-inspired car that pushes like a pig through every corner. Ford Ranger Splash: Blast From The Past Returns For 2022!