It is not too often that a writer for Automoblog.net has an opportunity to cross over to the marine industry news. The intertwining of automobiles and boats has actually amounted to some rather momentous creations in the transportation field. In 1953, marine product manufacturer Molded Fiber Glass Boat Company served as the new supplier of the Chevrolet Corvette‘s composite body shell. As well as building the Dodge Charger and Chrysler 300 cars during milestone era of the automobile, Chrysler Corporation was also heavily involved in the marine industry until the 1980s.

In many inboard motor speedboats built from the 1950s through to the 1970s, it was commonplace for automobile-derived powerplants to be modified for use on the water. While American auto companies such as Chevrolet, Chrysler or Ford have been popular engine choices, a group of students from Tennessee Technical Center in Nashville and the Nashville State Community College are currently engaged in a marine build project that will marry a classic wooden Chris Craft boat with Infiniti power.

Engineering exploration and a unique restoration endeavour, the Infiniti Luxury Boat Project basis is a 20-foot 1962 Chris Craft Holiday. Consisting of an all-wooden hull that has degraded due to the age of 50 years, one-half of the Infiniti Luxury Boat project focused on bringing the showroom condition back to the watercraft structure. For what is a labour-intensive job, project supervisor George “Dodo” Brockman estimated that as much as 85 percent of the Chris Craft‘s wooden hull will need to be replaced stating, “Some pieces you could put your fist right through”. Up to 600 board feet of high-grade mahogany gathered through sustainable harvesting will be used to bring the Chris Craft Holiday boat back to its former glory. 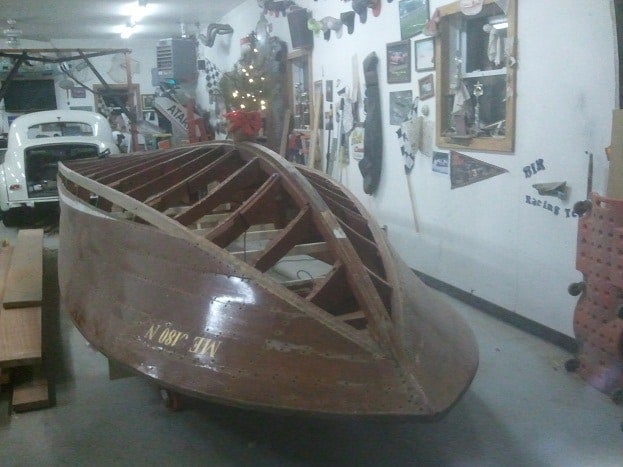 As the 20-foot Chris Craft Holiday receives revitalization, Infiniti’s contribution, a 400-horsepower 5.6 liter V-8 to the marine project was being primed for its future home inside the watercraft. Called a marinized engine, the Infiniti 5.6 liter V-8 powerplant was modified to the rigors to boating. Through a travel that saw the all-aluminum eight-cylinder engine produced in Decherd, Tennessee removed from its original 2011 Infiniti QX56, transported to Maine and then to Alabama where a number of modifications were initiated. Fitted for combination with a ZF/Hurth marine transmission, the 5.6 liter V-8 engine consisted by a water-cooled exhaust manifold and is now equipped to run on a closed cooling system.

Besides receiving an engine from Infiniti, the inspiration of Nissan’s premium brand will go into the final presentation of the end creation. Through the reassembly process during the Infiniti Luxury Boat Project, the 1962 Chris Craft Holiday will receive a modern interior borrowing from the QX sport utility vehicle. Featuring semi-aniline leather seating, XM NavWeather system and a Bose sound system insure the watercraft aspires to echelons of speedboat luxury yet to be fully explored.

When completed, the Infiniti-powered 1962 Chris Craft boat will be combined with a colour-matching 2012 Infiniti QX56. While no completion date has been set on the Infiniti Luxury Boat Project, fans of the project are welcomed to visit Infiniti’s Facebook and Twitter page for updates.