Well, Lexus, you had a pretty good run with the HS 250h Hybrid being the only entry in the entry-level Hybrid Luxury Sedan segment, but it looks like Lincoln is throwing their hat in the ring too. Starting with the five-year-old Lincoln MKZ sedan – briefly known as the Zephyr, as you may remember – Lincoln stripped out the standard 3.5-liter V6 engine and tossed in the 2.5-liter hybrid powertrain from the familiar Ford Fusion. Then they made it cheaper than the Lexus, of course. In fact, it starts at the exact same price as the regular MKZ, giving it the honor of being one of the first cars to not charge a premium for a hybrid powertrain. Lincoln claims it beats the Lexus in nearly every aspect. Let’s have a look-see:

There’s no doubt that the Lexus is the sportier of the two, and the Lincoln has the upper hand in the roominess and luxury department. But despite what you see above, this isn’t an MKZ vs. HS 250h article.

In fact, replace the Lexus up there with Ford’s own Fusion Hybrid, and every number is nearly identical, except for the price – and that’s my problem with the MKZ Hybrid. It may be cheaper than its only competitor, but it’s around $6,300 more than the Fusion, which is almost the same car. Yes, the Lincoln has the shiny bits, wood trim, standard leather, and extras like heated & cooled front seats, but it doesn’t hold that same level of extra luxury you’ll find in some of Lincoln’s competitors.

Don’t get me wrong; it’s a nice ride. It’s comfortable, quiet (except for an annoying powertrain whine if you don’t have the radio on,) smooth, and has plenty of fancy features to keep you busy or confused. The Ford Lincoln Sync is still top of its class, offering voice controls and excellent integration with the car’s entertainment system and navigation. It’s not perfect, though – every time we hooked up an iPod, it would give us the “Sync was unable to index all of the music on this device” error. Every. Single. Time. This left us with a partial music library available at all times, which is more than a little frustrating. Voice recognition has gotten better over the years but still gets some words mixed up (even with my impeccable mid-western accent.) Our test MKZ was fitted with the $3,600 navigation, rearview camera, & upgraded sound system package. The integrated navigation is an excellent unit offering a very clear screen and interface, but travel more than a few mph, and it disables itself until you stop. Another frustrating flaw that leaves me continuing to buy portable GPS units.

Without question, the coolest part of the car is the digital instrument panel Ford likes to call the “SmartGauge.” A large analog speedometer in the middle is surrounded by an LCD screen on each side, which offers a dynamic and beautiful animated monitoring system that can be configured on the fly to show different levels of information. On the left, you get a fuel gauge and an instant mpg meter along with an average mpg readout on top of a “flower blossom” background that grows more leaves and flowers as you drive more efficiently. A variety of information can be selected on the left, including a battery level meter, EV mode indicator, tachometer, and a throttle input-power output gauge. If you’re light on the throttle, you can keep it in EV mode for a while by keeping an eye on this gauge. Turn the car off, and you’re shown a summary of how far you went and the fuel economy you got on that trip. Nifty.

The MKZ’s interior didn’t match up with the high-tech gadgetry in the car. While simple and basic, the design is a bit blocky and old-fashioned, especially for a hybrid. And Lincoln…no standard sunroof? C’mon.

One thing that impressed me about the MKZ Hybrid compared to other hybrids I’ve driven is that you can keep it in EV mode much longer and at higher speeds than many others. I traveled at 40 mph in EV mode for minutes at a time without the gasoline engine turning on at all – it makes a huge difference. Once the gas engine is on, though, the MKZ doesn’t have an issue getting up to speed. It’s no hot rod, but for a heavy hybrid sedan, I didn’t feel cheated out of power at any time. Of course, the hybrid curse is still present – the lag between pressing the throttle down and the gas engine turning on is still more than a full second. It may not seem like long, but it will if a semi-truck is heading your way fast and you need to go NOW. 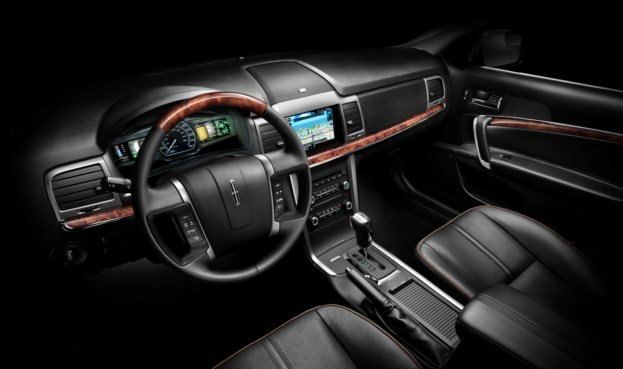 Lincoln touts the 2011 MKZ Hybrid as being “The Most Fuel-Efficient Luxury Sedan in America,” and it’s true. Before you buy, though, consider the Fusion Hybrid, which offers much the same car for less dough. If you’re not willing to give up the extra luxury, the MKZ is a good choice. It doesn’t have any direct competition aside from the above-mentioned Lexus, at least until Infiniti puts a hybrid powertrain into its G-Series sedan.

The fact that Lincoln doesn’t put a price premium on the MKZ Hybrid changes the game a bit and makes the hybrid a viable choice for those who were hesitant about spending thousands more for a powertrain that may or may not make that money back within the next five years.