As over 80,000 industry spectators prepare to converge for the 2010 SEMA Show in Las Vegas, Toyota is preparing to show off the ingenuity and remarkable performance passion with a special Tacoma pickup truck.

Constructed almost entirely out of parts obtained over the Toyota Racing Development (TRD) parts counter, the Toyota Tacoma X-Runner RTR (Ready to Race) has obviously been a labour of love for the engineering team behind this project. Raiding the parts bin of TRD, the Tacoma X-Runner RTR SEMA show truck is swimming in the characteristics of a perfect straight-liner.

Besides the truck-like ground clearance of the production Tacoma X-Runner model reduced by 4.5 inches, the compact hauler’s body is left untouched from its stock appearance. A two-tone Five Axis Classic Silver and Red paint scheme complies to Toyota’s corporate motorsport colours. The number 95 symbolizes the 1995 model year when the Tacoma name was first worn by the compact pickup truck.

Creating an ideal sleeper hot rod truck, the Toyota Tacoma rather stock appearance on the outside conceals some special surprises. Shoehorned into the Toyota Tacoma engine bay is specially fitted 500-plus horsepower V-8 powerplant. Borrowing a 5.7 liter powerplant from the full-sized Toyota Tundra truck, the Tacoma X-Runner RTR receives the TRD twin-scroll supercharger kit generating an SAE certified 504 horsepower and 550 pounds-feet of torque.

In catering to the drag racing truck theme, rear Goodyear Eagle tires are comparably larger than the front tires by 2 inches in diameter and 7 inches in width. The braking system and all the electronic aids are preserved but the exhaust system is given a major overhaul. Moving the exhaust outlet is done to maximize high-impact take offs from drag racing’s popular ‘Christmas Tree’ starting light. 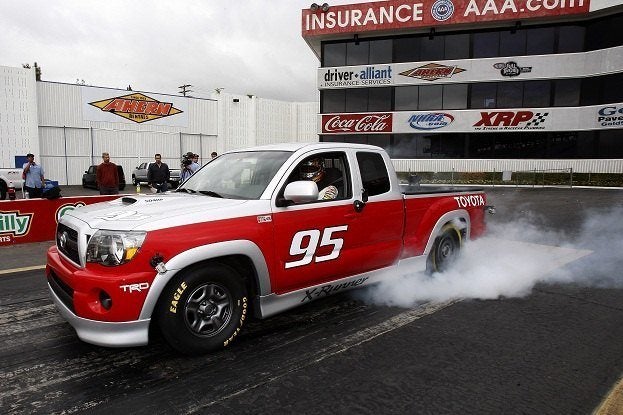 Adapted to the sport of drag racing, non-essential weight is removed from the Tacoma X-Runner RTR. Including the windshield washer fluid reservoir, power convenience equipment, air conditioning as well as the rear seat shaves weight in order to shave quarter-mile times. Accounting for safety, a TRD roll-bar is outfitted inside a racing-tailored interior.

Though this demonstration model Tacoma presents a profound shift by Toyota to achieve maximum horsepower within a tight vehicle frame, dropping an 8-cylinder powerplant into a compact pickup is not a new notion. Both the Dodge Dakota as well as the Chevrolet Colorado and GMC Canyon pickup trucks have V-8 power on tap as an option in production trucks. In the case of General Motor’s compact trucks, their recent adaptation to V-8 engines in 2009 came years after mechanically-inclined tuners swapping in small block powerplants into the S-10 pickups.

With the Toyota Tacoma X-Runner RTR existing only as a show vehicle, the principles of TRD and the thrilling motorsports inspiration makes this combination a real go-getter.