Tony Borroz
Man CaveBook Garage
Published: November 15, 2020
Home
Man Cave
Table of Contents show
Big Things, Small Packages
Don of All Trades
The Shadow Crew
Why We Love This Book
Shadow: The Magnificent Machines of a Man of Mystery by Pete Lyons
About The Author 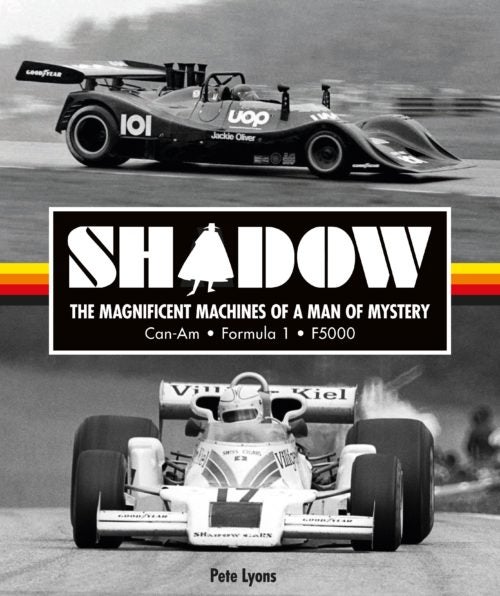 Author Pete Lyons chronicles the story of the iconic and mysterious black Shadows. Inspiration for the book came from the numerous interviews Lyons conducted with the late Don Nichols and other members of his organization. Evro Publishing has released the book to coincide with the Shadow’s 50th anniversary in 2020. Lyons is also the author of Lotus 72.

“This is a good book,” I said, leafing through the first few pages. “Wait, this is a very good book – who did this?” I said again as I was a little farther into it. Pete Lyons, it just so happens, one of the best automotive writers currently working. He’s the perfect guy to take on one of the most interesting, fun, and enigmatic tales in racing history in Shadow: The Magnificent Machines of a Man of Mystery.

Yes, that’s a wordy title, but that’s about as bad as the writing gets. It’s also right on the money because Shadow racing cars came out of nowhere and, initially at least, had everyone shaking their heads.

I remember when these things hit the scene. When I was a kid, I was a Can-Am fan; everyone was, honestly. Then one day, without warning, without fanfare or announcement, this tiny little car, all black, showed up at a Can-Am race. Now, race cars are usually much smaller than you think, including “big” Can-Am cars like McLarens and Lolas and such. But the Shadow Mk. It was simply dwarfed by the already small cars around it. They said it was “knee-high” and that was, honestly, an overstatement. It barely came up to your knees – and that was just the roll bar!

There was the requisite big American V8, but it was buried way down there, somewhere, fed by this fuel injection system that looked like a Sci-Fi ray gun. It was designed by this genius/nutcase/madman named Trevor Harris, and the whole idea and team was cooked up and ran by who?

Don of All Trades

Don Nichols. Don who? Dunno. Nobody had heard of him. Nobody knew much about him, and he wasn’t talking much or giving anything away. Tall, gaunt, with a gray-striped beard and receding hairline, he looked like a sidekick for Vincent Price. It turns out Don was American (which was only half surprising), an Army vet, a bit of an eccentric, and thoroughly inspired.

Much like Hall, Nichols and his cohort didn’t say much. This is all part of the racing game. I mean, no one in their right mind is going to roll up to the track with a revolutionary car and, when asked, blurt out, “Oh yeah, what I did was … ” That would be like a poker player saying, “Hey look: I got dealt four aces!”

As time went on, Nichols and Harris and the Shadow crew (the Shadow crew, how cool is that to say?) became more orthodox but never really gave much away. As for the Mk? It sort of worked, though finding the right tires was a pain. They were only slightly bigger than go-kart tires, and a lot of the supposed aero gains were not a total game-changer, more of a nudge in performance. So the cars got bigger and, little by little, more conventional. They always stayed black, however.

The arc of the story for the team came to an end in the mid-80s, but from their start in the late 1960s until they folded up their tent, they found racing success along with innovation in Can-Am, IndyCar, and, of all things, Formula 1. As the stories faded into legend and the legends became barely remembered, Pete Lyons, bless him, decided to write “the first-ever book revealing the whole story of the iconic ‘black’ Shadows and the Shadowman who made it happen.”

And it’s that backstory that is, in all honesty, the most interesting part.

The first three chapters or so are just about Don Nichols, where he came from, and what his mindset was. And all of this was news to me, which says something. I have been devouring everything I could about racing since I was a kid, literally my entire life, and I never knew the backstory on Nichols. No one did. He’s an interesting guy, although not nearly as nutty as you’d think. He’s just quiet and knows that keeping your mouth shut helps you win races.

As you get to the second half, Lyons spends time talking about Formula 1 and highlights the 1977 Austrian Grand Prix victory of Alan Jones. Also included are sections on Shadow’s Formula 5000 and second-generation Can-Am efforts.

So what we have here with Shadow: The Magnificent Machines of a Man of Mystery is a book for racing geeks, a book for engineers, and, fittingly, a book for people who like mysteries. It’s not an inexpensive book, but it is very well written. There are tons of photos (over 500 to be more exact) as a bonus. This book checks off so many boxes that gearheads should be required to purchase it by law.

You can pick up Shadow: The Magnificent Machines of a Man of Mystery on Amazon for $99.00 (at the time of this writing).

Shadow: The Magnificent Machines of a Man of Mystery by Pete Lyons

Pete Lyons is an international motorsports reporter, photographer, and award-winning book author in the fields of Formula 1, Can-Am, Endurance sports cars, Indycar, Trans-Am, and many more. In his decades-long, worldwide career, Lyons has authored 14 books and been on staff or a freelance contributor to numerous automotive publications, including Autosport, AutoWeek, Car and Driver, Road & Track, Vintage Motorsport, and many others. His honors include 2 Dean Batchelor Awards for Excellence in Journalism, and a Lifetime Achievement Award.