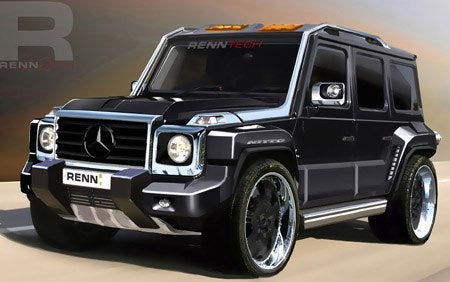 Since we mentioned the 30th anniversary of Mercedes Benz\’ GelÃ¤ndewagen the other day we figured we\’d close out the week by mentioning this upcoming concept built on the same platform by the raving lunatics at RennTECH, er, sorry, we mean calm and rational thinkers at RennTECH, and their new G Wagen Concept.

Why does this idea seem like something proposed from a borderline psychotic? Well for starters, it\’s putting 376 lb.-ft. of torque to the pavement, for one thing.

Now, at the moment these are just design renderings. RennTECH has no plans to make it, etc etc etc, but we ARE in the middle of auto show season, and it DOES have some features that could make it more desirable to build and show, especially for the European market.

Besides, there\’s something appealing in an over the top way about making a hot rod out of a former military truck, sort of like when Lambo decided it was a good idea to put a V12 from their Countach into the off-road LM002. Sure, it\’s not subtle, but that\’s kind of the whole point.

Anyway, one of the things that does make this attractive for the Euro market is the drivetrain the RennTECH is looking into. The concept G-Wagen would feature a turbo-diesel of some sort. At the moment they\’re saying either a 3.0-liter turbodiesel V6 cranking out 376 lb.-ft. of torque, or perhaps the upcoming Euro version of the non-BlueTEC diesel.

Either way, this bodes ill for the RennTECH version of the G-Wagen making it to these shores, given our strict requirements for diesels these days. Which is unfortunate, because you know they could sell one or two of these to Ahnuld (who already owns four of the \”normal\” GelÃ¤ndewagen that he converted to run on bio diesel). And there would probably be a few other faux macho Hollywood types that would be interested … and maybe Jesse Ventura; what the hell is he up to these days?

The RennTECH modified GelÃ¤ndewagen is more than just an engine pump up and swap. It\’s got huge wheels, a wide-body kit, lots of shiny metal trim strewn about, the usual for stuff of this nature.

RennTECH should build it, and then figure out how to bring it over here. Not only could they sell a few to Hollywood types, but you know rap moguls and new NFL stars would line up as well.