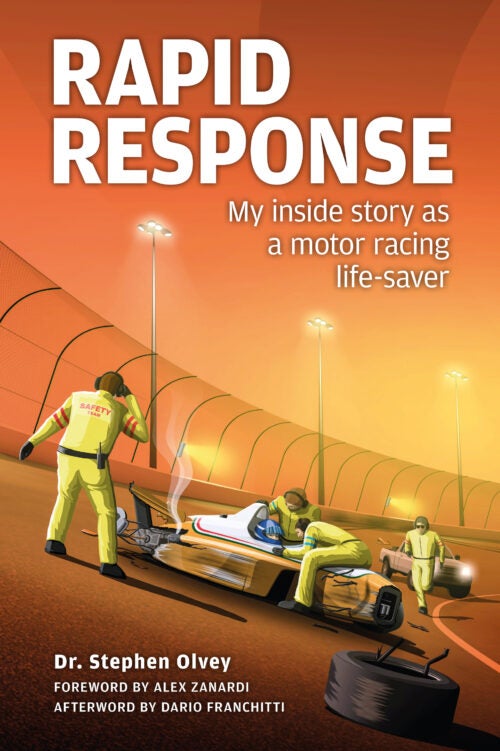 Affiliate Disclosure: As an Amazon Associate, Automoblog earns from qualifying purchases, including the book featured here. These commissions come to us at no additional cost to you. Our Book Garage series showcases what every enthusiast should add to their library.

The unspoken question (and answer) of Rapid Response is this: Can auto racing ever be completely safe? And the answer is no, but the book’s author has made it his life’s work to try.

Rapid Response, My Inside Story as a Motor Racing Life-Saver is a memoir written by Dr. Stephen Olvey, the Medical Director for the Championship Auto Racing Teams (CART) racing series in the U.S. from 1979 to 2003. Although still active in Motorsports, Dr. Olvey is also an associate professor of Clinical Neurology and Neurosurgery at the University of Miami Miller School of Medicine. Throughout his career, Dr. Olvey was among the first responders during track accidents and saved the life of F1 driver Alex Zanardi.

Indeed, Rapid Response starts with a forward from Zanardi, thanking Dr. Olvey for doing his job and saving his life at a race in Germany in 2001. That was just one of those bad series of events. A cascade failure (to use the parlance) that had Dr. Olvey and his crew getting to Zanardi’s car as the wreckage was still sliding to a halt.

I remember reading an account of the accident in the non-sporting press at the time. Dr. Olvey described sprinting towards what was left of the car, running across what he thought was oil, falling to his knees, and sliding up to the car like he planned it that way. It was only then that Dr. Olvey realized it wasn’t oil. It was a literal river of Zanardi’s blood, running in a three-foot wide stream down across the banking.

Too gruesome? Then perhaps Rapid Response is not the book for you because Dr. Olvey doesn’t flinch from his subject. He’s not ghoulish or anything, and he’s not reveling in all the nasty details. He is just a very forthright doctor, an emergency one at that.

I appreciate that kind of candor and honesty from doctors. I like it when a doc (or a mechanic or any other professional) tells you, “Okay, here’s how it is,” with no fudging, if-ing, and-ing, or maybe-ing. That directness, to me, means they’re not screwing around. And Rapid Response reads in precisely this way. The book’s 300 pages (give or take) are right to the point: this is how it happened, how it went wrong, how it could have gone much worse, and how it was fixed.

Despite the direct nature of Rapid Response, Dr. Olvey’s not a bad writer. He’s not a Hemingway or a Fitzgerald, but he’s much better than one might expect, as good in some places as any motoring journalist would be. While Zanardi handles the foreword, Dario Franchitti gets a shot at the afterword, and Prof. Sid Watkins does another afterword (Watkins was the Grand Prix equivalent of Olvey).

Also mentioned is Dr. Olvey’s predecessor, Dr. Terry Trammell. Trammell is just as crazy-good as Olvey is. Most notably, Trammell was the guy that rebuilt Rick Mears’ legs after they were comprehensively crushed at Sanair. I still remember seeing the x-rays of Mear’s left leg and the caption stating, “2 titanium plates, 3 titanium rods, 14 pins, and 21 screws.” How can a surgeon even contemplate doing that?

Rapid Response is great if you like racing books but want something a little different. It will also make for a nice gift if you have a doctor or paramedic in the family, whether they’re race fans or not. At the time of this writing, Rapid Response is available on Amazon in both hardcover and paperback. Dr. Olvey’s memoir was also made into a documentary film with the same name, which is available for rent or purchase on Amazon Prime.

If you want to learn more about the good doctor, listen to this episode of CarsYeah. Host Mark Greene sits down with Dr. Olvey, who shares more about this career, his first special vehicle, and other books he recommends reading.