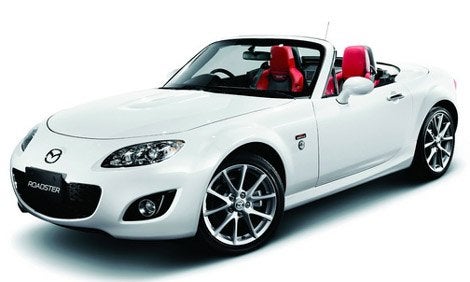 20 years? Has it really been 20 years since Mazda re-wrote the book about what a small, light and nimble sportscar should be? Damn, I guess it has. It seems like only yesterday that the sportscar was a fading automotive idea. Sure, sure, there were “sporty cars”, but something that was lightweight, with only two seats and most definitely rear wheel drive seemed to be a declining idea.

In 1989, the stuff that constituted a sportscar was nice enough, I guess. Things like Honda CRXs and Toyota Celicas and whatnot. They were light enough, and the handling was OK, for a front driver, and a lot of very efficient, very reliable Japanese economy sportsters had nods towards practicality like sort-of back seats that could be used in a pinch.

But all those things that they offered weren’t what real sportscars were lacking when they met their eventual and slow demise in mid to late 70s. The problem with 1970s vintage MGBs and TR7s wasn’t their engineering packaging or need for a little more room behind the front seats. What they needed could be summed up in one simple word: Reliability.

And what Mazda did, or more specifically, a group of guys within Mazda who are a lot like you and me, did, was put together a modern version of the classic convertible sportscar. It used a lot of off the shelf components to keep costs down, and reliability high. And here we are, two decades later, and the Miata (now simply called the MX-5 officially) is still going strong.

And since about two years in, Mazda has been rolling out the special editions of their fun little drop top. There have been M-Editions and STO editions and the highly coveted R-Packages. So 20 years on, you know they’re going to do something special up.

And they did. In this case, the 20th Anniversary Edition will feature such goodies as Crystal White Pearl Mica paint, unique red and black RECARO bucket sport seats, clear front fog lights, ’20th Anniversary’ badges on the fenders, 17-inch alloy wheels, heated seats with five temperature settings, and a glass rear window for the soft-top model. That soft-top version is the RS which comes with a six-speed manual transmission. There’s also a VS version with a retractable hardtop and a six-speed automatic. Also included in the anniversary package is a front strut tower bar.

Prices in Japan are come it at around $29,900 for the soft-top version and $32,500 for the RHT model. Only Japan for now, but other markets are soon to follow.