To many, the hydrogen fuel cell is the way we will power our personal vehicles in the future. Non-polluting, they run on the most abundant stuff in the universe and their only real emissions is water. It sounds sci-fi and futuristic, because it is, but the ironic thing here is although the hydrogen fuel cell is definitely space age, its also been around for half a century – General Motors’ version anyway.

1966 was a pretty interesting year for science geeks; geeks in general really, but in particular, gearhead geeks. The space race was full speed ahead to beat the Soviets to the moon. Batman played by Adam West debuted on TV, and so did this rather obscure show called Star Trek. In the car world, speeds were going up everywhere. The Indy 500 had undergone a complete revolution to “rear”-engined cars (actually mid engine, but the roadster was dead for sure). Grand Prix cars were steadily progressing with regard to both technology and speed, as was sports car racing.

Space age stuff, trickle down technology goodies, had been dripping out of NASA for a while now. Structural plastics were turning up on the road and the track. Electronics were getting smaller, faster, and more robust.

Velcro. Tang. It was your tax dollars at work buddy.

Also in 1966, with a lot less notice in the mass media, General Motors tested the Electrovan (great name!), the world’s first hydrogen-powered fuel cell vehicle. It might still ring as new and space age today, but GM has had a hand in the technology for quite a while. The project manager of Electrovan fuel cell development was Floyd Wyczalek, who at the ripe, young age of 91, is still going strong.

Floyd fondly remembers the 200-person team working on the Electrovan project. It would turn out to be the first technology transfer of fuel cells from President John F. Kennedy’s 1962 challenge to NASA to “safely land a man on the moon before this decade is out” (say it in a Boston accent).

“We had three shifts of people on this project starting in January 1966,”  recalls Wyczalek. “And finishing 10 months later, we had one running demo for the Progress of Power press conference in October that year.”

That is really impressive; in less than a year, GM, Wyczalek, and 200 wrench turning, slide-rule jockeys had a working demo of something that was only seen in a literal spacecraft. Unlike a number of futuristic ideas that got to the demo stage and then languished (MIT’s mag-lev train is a good example), fuel cells in general, and GM’s work with them in particular, have been moving steadily along.

GM has invested more than $2.5 billion in the technology and is among the world’s leading patent holders in the field along with Honda, who they have been collaborating with since 2013. GM says its next-generation fuel cell system will be much more powerful but only a fraction of the size of the equipment-crammed Electrovan. That mid-60s vintage project only had room for a driver and two passengers. Let that sink in as you ponder a current full-size GM passenger hauler, like a Tahoe or Suburban.

You don’t have to be a graduate of West Point to realize one of the prime customers for a hydrogen fuel cell could be the military.

“We see broad potential for fuel cell systems in military, aerospace, and other applications while we continue on the path to a commercial vehicle,” said Charlie Freese, Executive Director, GM Global Fuel Cell Business.

But, at its heart, this is not just a tech story, but also an old car story. And like any good old car story, this one ends with a barn find (sort of).

After logging hundreds of hours of testing, both on the road and in load cells back in the 60s, the Electrovan was stored in a Pontiac, Michigan, warehouse for 31 years before being unearthed in 2001. In the early oughts, the vintage Electrovan was used in fuel cell displays and loaned to museums when not at home at the GM Heritage Center.

Since late 2012, Pontiac, Michigan has been home to the GM global hydrogen fuel cell business. I, of course, wonder if the Electrovan is still capable of driving after all these years? 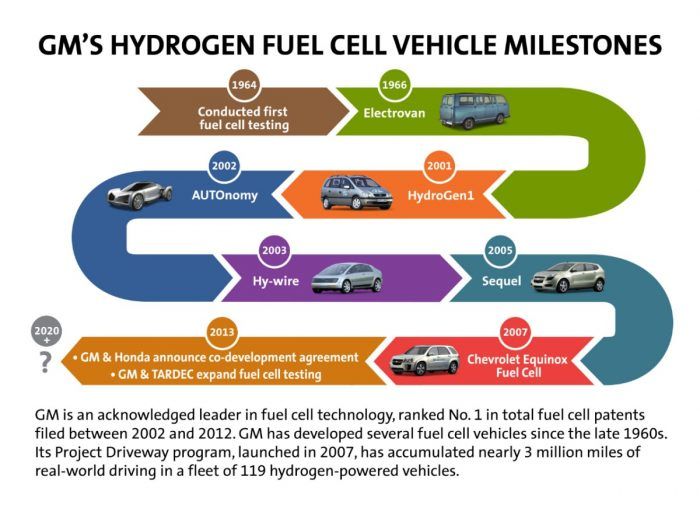