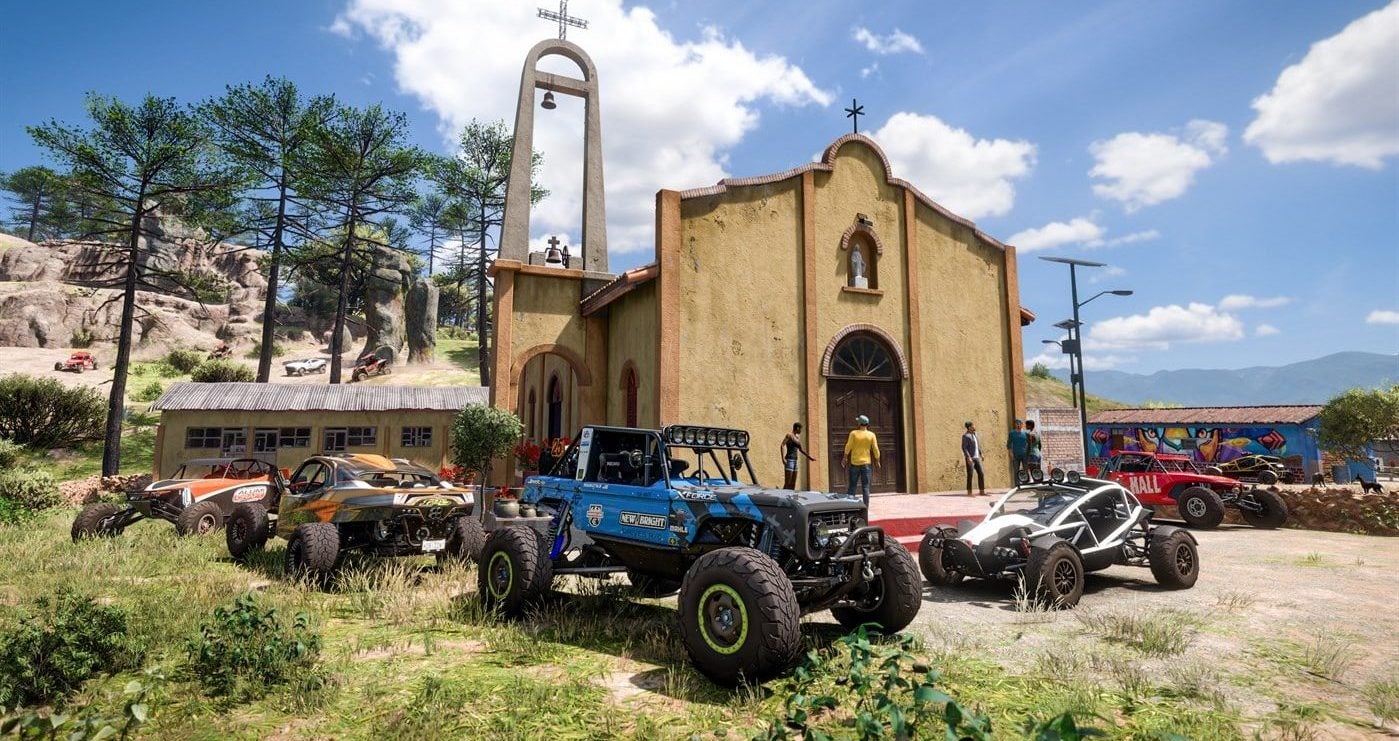 Affiliate Disclosure: As an Amazon Associate, Automoblog earns from qualifying purchases, including the games and products featured below. We purchased our own copy of Forza Horizon 5 for this review. For a perspective on how we review video games, please see our primer on the topic of video game coverage.

Eight hours ago, I was airlifted into Mexico to start my long-running relationship with Forza Horizon 5. I already have two C8 Corvettes, a McLaren Senna, and, worst of all, a BAC Mono. Handing me a Mono is like giving Bernie Madoff a checking account. But this is the moment we’ve all been waiting for, the release of Forza Horizon 5. There’s a lot that could be said about this game, given the depth and richness it provides. It could be said that Forza Horizon 5 is Forza Horizon 4, only bigger and set in Mexico.

That would not be entirely wrong – it would be 100 percent accurate, actually – but it really misses the overall point.

True, FH5 is much bigger than the Scotland found in FH4. Around the outside lap, a full circumnavigation is around 30 miles in FH5. In FH4, as I recall, it was about 13. Ergo, if you do the math, that’ll tell you how much land there is in FH5. The short answer: A lot. And it is all driveable.

You can break out the Jeep or the Raptor or whatever you’d like, point it at the far horizon and GO! Although that is essentially pointless, it is a complete hoot to do once in a while. This also brings us to the first and perhaps most subtle difference between FH4 and FH5.

Since the setting is in Mexico, the environment is entirely different. Not only is the weather much better (little rain and no snow), but the game’s flora and fauna are correct and indigenous to Mexico. This means fewer big, hard, immovable trees and tons and tons of cactus and ocotillo and mesquite. And let me tell ya, pal: those things don’t stand a chance against a two-ton vehicle doing 100 mph.

Mexico, such as it is in Forza Horizon 5, is wonderfully realized. When the Spanish showed up in the Aztec empire about 500 years ago, they were amazed at how much the land looked like Spain. Indeed, there’s basically a stripe across the globe from The Sea of Cortez all the way east to Persia, where the weather is more or less the same, so the plants are more or less the same, and the houses and buildings are very similar.

I came blasting through a city yesterday, turned right, and was in a section that could have been The Alfama district of Lisbon. Out by the coast, it could have been Hawaii or Costa Rica or SoCal, or Baja. The stretches of desert could be anywhere from Bakersfield to El Paso, from Flagstaff to the Yucatán Peninsula.

The funny thing is, the Pacific Northwest where I live isn’t that far off from Scotland; the roads, the weather, etc. Not that long ago, I spent three years living in Arizona, seven miles from the border. And I can say that FH5 is really close to Arizona and Mexico in terms of its design. At the moment, I plan to play Horizon 4 when I feel like driving around home and Horizon 5 when I feel like driving around Arizona.

The Not So Good

The downsides, such as they are, continue to reveal themselves. Twilight is handled poorly, being my biggest gripe so far. The game doesn’t handle the half-light very well when driving from the cockpit view. Everything gets washed out and gray. It’s tough to tell where the road is going, let alone where your dashboard ends, where your front bumper is, and boom, you’re off the road and into the weeds. It looks like a resolution or rendering issue that might not be a factor in the latest, high-res Xbox, but it sure is there on mine.

The only workaround is to switch to Hot Wheels view and drive that way until you transition into full night. Full night is still problematic in the same way, but not as bad.

Although the handling is sharper and more realistic in FH5 than FH4, it seems like all the cars have been set up in a much more benign fashion. I was driving a first-series Lotus Elise and the thing understeered off a corner. Understeer? In an Elise? I actually had to add more rear bar to get it to rotate into the corners better.

I noticed the same thing with the Ariel Nomad. In Horizon 4, the Nomad had the directional stability of a featherless arrow. I mean, even with no rear bar at all and a silly amount of positive camber, I couldn’t point it in the right direction. Not so in FH5. The Nomad handles quite well. Not super, but not bad either. Fun car!

It’s also worth mentioning bridge railings. I was driving that Elise across the center staybridge when I literally said out loud, “I bet the railings are hardpoints,” as I was swerving for the edge at 120. “Just like in Horizon 4, they’ll keep me on AAAHH!! . . Nope. They aren’t.”

I punched through the railing like it was a kid’s couch fort and did one and a half rolls before landing on the valley floor waaaaaaay below and bouncing back wheels up. In previous Forzas, things like bridge railings were impenetrable walls. You could, if push came to shove during a race, bounce off them or grind along them. That doesn’t look like an option in Mexico. Note to self: Be more respectful of railings, drop-offs, and falling from a great height.

I am having fun working my way through all the tracks and races. The same downfall from FH4 is here in FH5. All the races are only three laps long. That short sprint distance puts you in a position of having to drive harder and take more chances (and sometimes be a bigger jerk) than if you had more laps. Making the number of laps selectable in the future would be a good improvement on an already great game.

I got to, what I think, is the highest point on the map. A winding, FUN mountain road leads to a radio observatory at its very peak. Sure, the views are fantastic, but the road, winding back and forth and curving this way and that, was what it was all about. The fact that I was doing it in a Jag D Type made it all the better.

Although the navigation and interfaces are essentially the same as in FH4, the colors have been changed. The overall feel of the physics engine has improved. It’s sharper and with more direct kickback through my Logitech G920 wheel. Bottom line: If you liked Forza Horizon 4, you’re going to love Forza Horizon 5.

As of this writing, the standard edition of Forza Horizon 5 for Xbox One and Xbox Series X is available on Amazon for about $43. Or, with Xbox Game Pass Ultimate, you can download and play FH5 directly on your Xbox console or Windows 10 PC. There is even an option to play games on your Android mobile phone or tablet from the cloud via the Xbox Game Pass mobile app.