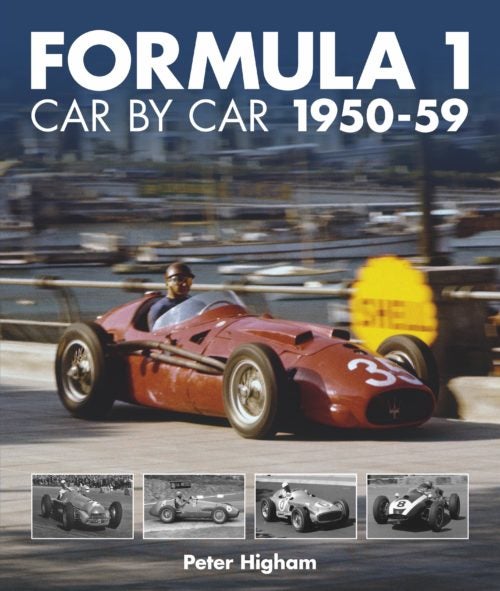 Affiliate Disclosure: As an Amazon Associate, Automoblog earns from qualifying purchases, including the book featured in this article. If you purchase Formula 1: Car by Car 1950 – 59 we will earn a commission (this comes at no additional cost to you).

This is an excellent book. Formula 1: Car by Car 1950 – 59 is not only a handy resource that every gearhead curious about racing history should own; it’s also well written and entertaining. Posing as a reference book, which it sort of is, it really works as an early history of the most popular sport in the world.

Formula 1: Car by Car 1950 – 59 was authored by Peter Higham, the guy who wrote for Motor Sport magazine (one of the longest-running and most respected Brit racing periodicals). As the title implies, this book only covers the first official decade of F1 racing. Technically speaking, Formula 1 racing started in 1950. There was a form of it before The War, but what we know as Grand Prix racing today was first formalized in 1950. And the early years were a bewildering hodge-podge of mechanic’s specials, barnyard rebuilds, and serious, wondrous cars from the likes of Alfa Romeo, Mercedes-Benz, and Italian newcomers Ferrari.

Part of the reason why things didn’t get revved up until 1950 was largely due to the devastation of World War II. With large sections of Germany bombed flat, Italy in shambles, France reeling, and Britain barely dealing with post-war rationing, the fact that Europe was able to go from Dresden in 1945 to racing cars at Silverstone in 1950 is a minor miracle.

And also a testament to peoples’ desire to move on, rebuild, and start having fun.

As I said a moment ago, the first few years or so brought out some interesting creations. Higham covers this in the year-by-year, chapter-by-chapter layout. As you might imagine, parts of the book are chock full of pretty goofy cars. And I don’t mean just the French ones. Up until the late 1960s, Formula 1 was only a set of regulations about how your car had to be built. And if you were good with tools, had a bit of mechanical ingenuity, or the desire to go racing, you could cobble something together, show up at the track, show it to the scrutineers, then race against guys like Farina and Ascari and Fangio.

I know. It sounds crazy if you think about it for more than half a minute, and it was, but it was a great way to fill out the grid, get people involved, and it made for some very entertaining racing. On top of that, more than a few of those guys that said, “I think I’ll give this a try” turned out to be people like John Cooper and Ken Tyrrell and such. I mean, hey, you gotta start somewhere.

All this craziness is lovingly documented and illustrated by Mr. Higham in a very entertaining fashion in this book. Given its title, it’s part of a series of similar books from Evro Publishing. In this particular installment, there are tons and tons of fantastic photos. Even the cover is graced by a tremendous shot of Fangio himself hustling a big V12 Maserati along the waterfront in Monaco, nose down alarmingly under heavy braking.

Not only does every season get a nice rundown, but every car that entered into a GP is covered. Somewhere in my brain, I had remembered that people like Simca ran in F1. But here it is documented, with photographs showing a car with a face that only a mother could love.

The best part is how super thorough this book is. Higham even covers the Indy cars from the 1950s. Wait, what? Here’s the deal. During the 50s, the Indy 500 was officially part of the Grand Prix World Championship. If you go back and check the official records of the governing body, people like Wilbur Shaw and Bill Vukovich are credited with Grand Prix wins and points towards the driver’s championship. So, their cars – Millers and big honkin’ Offy powered beasts created in Speedway, Indiana – all get covered here. Bravo, Mr. Higham, bravo!

When the World Championship was first held in 1950, red Italian cars predominated, from Alfa Romeo, Ferrari and Maserati, and continued to do so for much of the period.

But by the time the decade closed, green British cars were in their ascendancy, first Vanwall and then rear-engined Cooper playing the starring roles, and BRM and Lotus having walk-on parts.

Learn more about the early years of Formula 1 in this work by author Peter Higham.
Grab It On Amazon

Go out and get this book. I’m not kidding. No equivocations, no nothing. If you’re a gearhead and you like racing, you will enjoy thumbing through Formula 1: Car by Car 1950 – 59 as much as I did. As of this writing, you can grab it on Amazon for about $45.00, with slightly used copies running a little less.

Peter Higham works in motor racing as a writer and project manager. For nearly 30 years, he worked for Haymarket Consumer Media, publisher of motor racing magazines and websites. For half of that period, he was director of LAT Photographic (now Motorsport Images), the world’s largest motor racing photo archive. A motor racing enthusiast since watching his first race in 1973, he has written seven books, including the acclaimed International Motor Racing Guide and World Encyclopaedia of Racing Drivers. He has been a columnist for Autosport and Motor Sport and was instrumental in running the prestigious Autosport Awards for over 25 years. He lives in Twickenham, Middlesex.