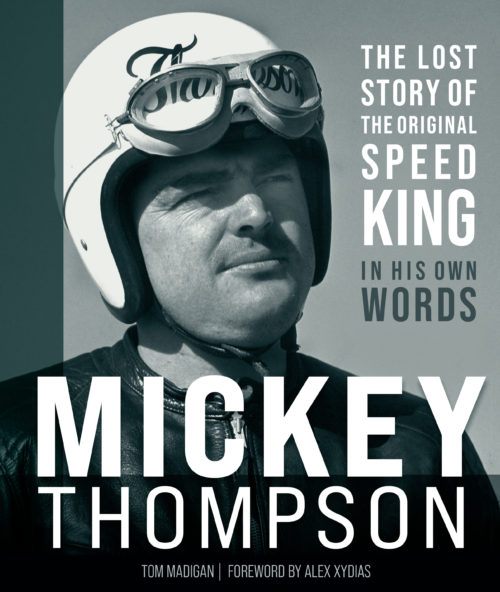 I was sitting at a local burger joint, reading this book, when a woman in her 20s walked up and asked, “Is that Mickey Thompson? Like Mickey Thompson tires?”

Indeed it was, but – and here’s the interesting thing – she had absolutely no idea Thompson was a real guy and did other things besides make tires. Maybe that makes the subtitle of this book The Lost Story of The Original Speed King In His Own Words a littler more on the money.

I can’t really fault her for not knowing. When Thompson was at his peak was in the 1960s and 70s. Besides, she was coming at this from her own unique vantage point. She was a Jeep gal so, of course, she knew about the tires. But of course, Mickey Thompson was much more than that.

Today, people think of Carroll Shelby as some sort of singular normalcy in American ingenuity and racing desire. He wasn’t. Shelby was one of many guys on the postwar American car scene. John Lingenfelter, Jim Hall, and Lance Reventlow are just three I can name off the top of my head. But there was a bunch, and Mickey Thompson was definitely “part of the scene,” as they used to say.

The thing that made Mickey stand out was that he did tons of different stuff. Land speed record racing, tire and wheel manufacturer, off-road racing, competitor in the Carrera Panamericana, the Baja 1000, race car builder, race promoter: Mickey Thompson was all of those. And the fact most people have forgotten (or don’t know) who he was is unfortunate, but the author here, Tom Madigan, looks to correct that.

A Story No Longer Lost

And the funny thing is, like Madigan’s subject, this book was already written, but nearly forgotten years ago. Back in the early 70s Madigan, a retired drag racer, set out to write a biography of Thompson. Two years into the project, after scores of interviews and research and a might-as-well-be finished manuscript, it got shelved. Now finally published by Motorbooks all these years later, Madigan’s work makes for a real gem of a book.

Mickey Thompson: The Lost Story of The Original Speed King In His Own Words gives us an amazing look at all of Thompson’s life, from his early childhood up through the 1970s. Mickey Thompson is packed full of rare and unseen photographs from the Thompson family and from contemporary sources like the National Hot Rod Association archives (hey, guess who was friends with Wally Parks?), along with other friends and competitors of Mickey’s.

Hardbound and clocking in at 240 pages, Mickey Thompson is not just about one guy, rather it offers a fantastic glimpse into a past that most people today would think never existed. What if, today, some guy built and raced his own car to a record at Bonneville, then decided to race in the Indy 500, then at Baja, and then figured what drag racers need was a good set of custom slicks, and did it all at the same time.

And really, you should via this book. If you’re a race fan, or a gearhead in general, then this book gives you deep insight into Thompson and his time: a time that, in so many ways, made the modern car world what it is. It’s a fantastic look at a time and a man we should never forget.

Tom Madigan has been part of the California car culture since the end of World War II. As a journalist, he has covered all kinds of Motorsports, but his first love has always been the sport in which he participated: Top Fuel drag racing. Madigan is the author of several books, including Motorbooks’ 2019 critically acclaimed Fuel and Guts: The Birth of Top Fuel Drag Racing; Edelbrock: Made in the USA; and Hurricane: The Bob Hannah Story. He resides in Sonora, California with his wife Darlene.