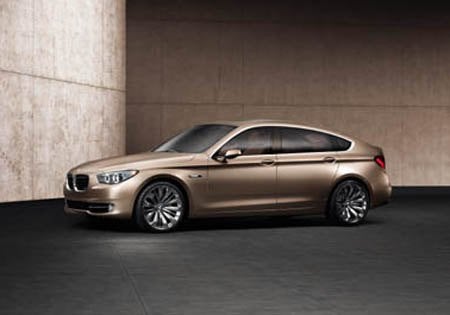 OK, seems like BMW is insistent on making more SUVs, or SUV-like things, sales figures or no. Here, for example, is BMW’s latest show car, er, SUV, or whatever, the Concept 5 Series Gran Turismo, which is having its coming out party at this years Geneva Motor Show.

BMW says the Concept 5 Series Gran Turismo “is the production-destined rendition of the Progressive Activity Sedan (PAS) development idea. For the first time, this concept car combines the looks and appearance of a sporty BMW Sedan, a modern Sports Activity Vehicle, and a classic Gran Turismo.”

Oh, OK then. So this is a Progressive Activity Sedan or PAS, and it’s NOT an SUV. It only sorta, kinda, looks like one. Why does this remind me of Mercedes R- Class, that big, huge station wagon thing Mercedes calls anything BUT a station wagon.

And is BMW serious about the Concept 5 Series Gran Turismo looking like “a classic Gran Turismo”? really? It doesn’t look much like a 60s-vintage Aston Martin DB4 or a Ferrari 250 Lusso to me. Sure, I bet this would be a great ride for a long journey, lots of room, and it’s probably as comfortable as BMW can make cars, er trucks, these days, but let’s not compare it to a “classic Gran Turismo”, shall we.

I can understand where BMW is coming from though. They’re torn by who they are, a company that makes some of the finest performing sedans on the planet, and what current market forces dictate.

And sadly, current market forces dictate that American car buyers (obviously this is squarely aimed at us first, and the rest of the world second) are still, for some damn reason, captivated by the SUV.

So you can see how this breaks down. You can almost see a bunch of buttoned-down German engineers sitting in a conference room bemoaning the state of affairs:

“What? SUV sales in America are STILL strong?”

“America is our biggest market.”

“We have to satisfy American buyers.”

“HEY! Why don’t we cut it both ways? Why don’t we make something that’s sort of like an SUV, but as car-like as we can make it?”

So, off they went, trying to serve more than one master … and God knows they’ll sell these things when they do bring the “production-destined”, er car, to market.

It’s not exactly small either. The Concept 5 Series Gran Turismo is between the BMW 7 Series and BMW’s various SAV models in size. Its length of 196.8″ is second only within the BMW model range to the 7 Series, while the car’s height of 61.2″ is exceeded only by BMW’s X models. The width is 74.8″ and the wheelbase is 120.9″. So you’ll be noticed (if that’s what you’re after).

Sadly, BMW doesn’t give any drivetrain specs, but I can guess what will be under the hood. Probably a range of engines starting with BMW’s evergreen straight 6 and ending up with an 8 for the top of the line. No doubt there’s also a diesel or to in the mix, and also a hybrid in the offing. Everyone is doing the diesel and/or hybrid deal with their SUVs these days.