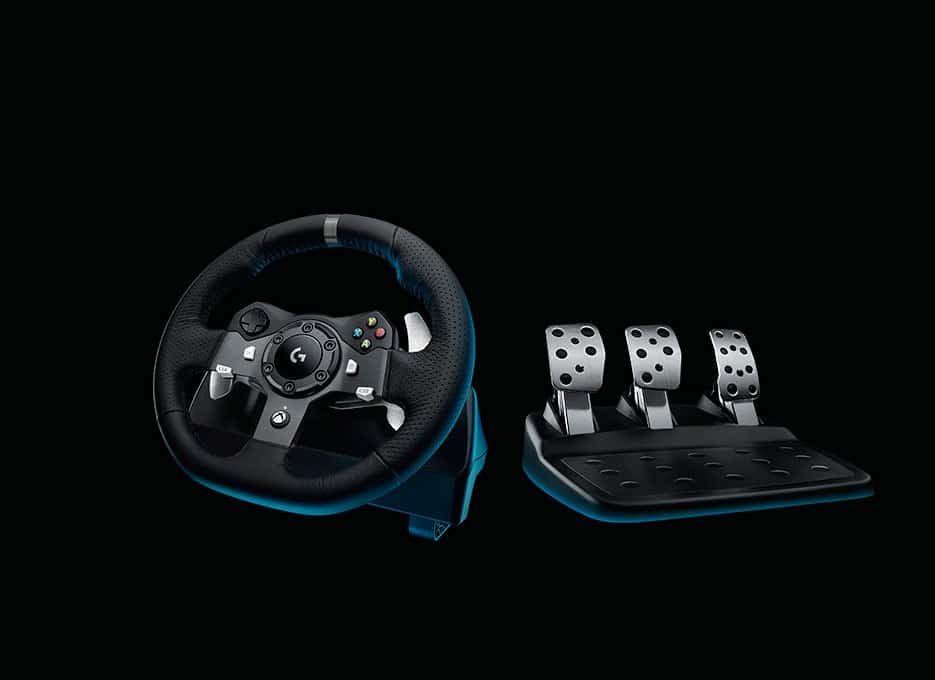 As part of our continued deep dive into racing games and gaming gear, Logitech sent us one of their Driving Force racing wheel and pedal controllers, the Xbox-based G920. The short version is that the Logitech G920 works great, is priced right, and only has a few usability issues.

Here is what I have found after using the Logitech G920 for the last couple of months.

Affiliate disclosure: Automoblog and its partners may be compensated when you purchase the products below. For a perspective on how we review video games, please see our primer on the topic of video game coverage.

Just like the PlayStation wheel (the G29), the Logitech G920 hits a sweet spot. Based on my experience, Logitech’s Driving Force wheels are not as technically proficient nor as over-engineered as either the Thrustmaster or Fanatec wheels. Both of those are modular, direct-drive setups that are very good indeed, but, like everything else on that level, they are also very expensive indeed.

I mean, if you go the Fanatec route (which was my old wheel), you better set aside at least a grand. Yes, that’s enough to buy a go-kart. Yes, that’s more than double what an Xbox costs. But, like buying a Ferrari, you get a lot of performance for all that cash.

The Logitech G920 gives you about the same amount of performance, with the differences ranging from the subtle to the inconsequential (more or less).

What Does The Logitech G920 Cost?

At the time of this writing, the Logitech G920 will set you back $250.. True, the build quality is slightly less than you’d find in the benchmark Fanatec wheels. If you are a “cost is no option” type of gamer, this might be a possible concern.

I mean, why bother with the Logitech G920 at all? Then I thought, “If I was wealthy and into Xbox racing, would I buy one Fanatec wheel, or four Driving Force wheels, and keep three in a closet as backups?”

The more I thought about it, the more sense the Logitech G920 made. It works well, it’s simple yet robust enough, and if something does wear out, just plug in the next one. 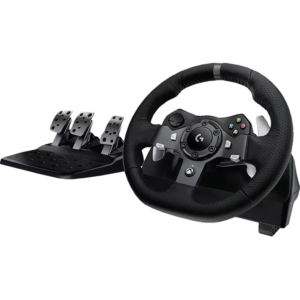 Logitech G920: What We Liked

The upsides to the G920 are many, considering the price point. Here is what stands out to me.

It’s leather-wrapped, and it smells great. I mean, it smells just like a new car. I know, that’s sort of a minor thing, but it is rather cool. The leather is hand-stitched and helps with gripping the wheel.

Out of the box, it has a 900+ degree of rotation, lock-to-lock. I like a much shorter throw than that, and adjusting it to my preferred 190-degrees was just a menu option away. You can, of course, tweak the force feedback settings as well.

On their highest setting (where I usually put them to make things as immersive as possible), things work swell on the G920. All that power and kickback is sent to the wheel via a dual-motor design with steel ball bearings and overheat protection. ‘

On some surfaces and in some instances, in some games, you can feel it rattling and trying to work out which tooth to settle on, but like I said, only in some instances. Most of the time, I am never aware of the drive mechanism.

The wheelbase used the same mounting hole pattern as my outgoing Fanatec. I mean, it bolted to the Fanatec wheel/pedal base, used the same holes, and even the same thread count on the bolts. I’m not sure if there’s an industry-standard or anything, but this was a huge time-saver.

The pedals were not as direct an install job but worked to where I could mount them to the stand. It’s obvious Logitech’s thought process here is that the pedals will (most likely) just be plopped onto a carpeted floor. There’s a strip of grippy deals to keep it from sliding around if they’re just free-standing. Of course, mounting them to a wheel/pedal base is preferred.

If you need some assistance with this, see this handy guide from Logitech.

Nothing is, however, perfect, and the Logitech G920 has a few issues. Here is what I have run into while using my Driving Force wheel and pedal.

Although a minor one, the power light on the wheel itself is obnoxious. It’s a white LED mounted on the six o’clock spoke that glows when the wheel is powered up. The problem is that it’s way too bright. I mean glaringly, almost blindingly bright. If you play in a semi-darkened room (which you should), it almost renders the wheel unusable. It’s staring you right in the face, so it’s impossible to avoid.

My solution, simple though it may be, was to put blue painter’s tape over the light to dim it down. It took five layers of tape before it wasn’t brighter than the TV screen. Five. Whoever at Logitech is working on hardware design should find a different bulb or just remove it entirely. I was seeing spots for hours.

The second issue with the Logitech G920 is the brake pedal. This is a known issue, as you can tell from the number of YouTube videos on the topic. Basically, the brake pedal is super, super stiff. Usually, this is a good thing.

What Logitech has done, it would seem, is put a truncated cone of plastic between the pedal itself and the stop at the end of the pedal’s travel. There’s a return spring, but all of the braking force is regulated by that chunk of plastic. At first, it seems to barely deflect at all. And I mean barely.

I initially thought something needed to be removed to get the pedals working, like a protective shipping pad or something. But after poking around online, I found out that no, that’s the way it’s supposed to work. And, to make matters potentially worse, the brake pedal is non-adjustable. That’s as stiff as Logitech wants it to be.

Will The Stiff Brake Pedal Cause Problems?

Now, my left calf is huge, and I have grown used to the amount of force needed to stop. I also appreciate that firmness since I turned the ABS off. Locking everything up then backing off just enough has become almost second nature.

So far, I’ve thrashed the daylights out of the Logitech G920, and everything seems to be holding up. I always try to be mechanically sympathetic (thanks, dad!), so I’m not trying to bust anything on purpose. Still, sometimes a guy can panic, you know? You can get in too hot and just mash the brakes with all ya got, or start sawing at the wheel like Mr. Toad in the middle of “His Wild Ride,” but my Logitech G920 has held up.

There’s some creaking now, however, from the brake pedal after several months of daily use. It wasn’t present at first, but it’s started to show up gradually. I figure (or I hope) that’s from the plastic block deflecting and deforming under pressure and not something in the bracketry starting to give way. Only time will tell.

Can I Fix My Logitech Brake Pedal?

There are tutorials about how to disassemble your pedals and get that hunk of plastic out, but I decided not to do that for a few reasons. One, I like a stiff brake pedal. Two, I figure I should learn to live with it for the sake of this review. And three, disassembling the pedals looked like a real pain in the keister.

However, you can adjust the position of the pedals to the left or right using a 2.5mm hex key. This can help with heel-toe maneuvers or to improve your comfort with the pedals.

Should You Buy The Logitech G920?

After several months of using the G920 on a daily basis, including testing my skills as a monster truck driver, I was only able to find two issues: the bright pilot light and a too-firm brake pedal. That’s all I could come up with as “wrong” on a $250 wheel and pedal setup. That’s sort of like getting the best filet mignon you’ve ever had for $25 but having to deal with water glasses that were too small. In other words, I can put up with those “flaws” for a very long time indeed.

Bottom line: If you’re getting into Xbox racing, the Logitech G920 is the right wheel to own. It works, and the price is right. We also recommend the Driving Force shifter for $60 as a nice complement to the wheel and pedal.

What comes with the Logitech Driving Force wheels?

Every unit comes with the steering wheel, pedals, power adapter, and user manual.

What is the difference between the G29 and the G920?

The G29 clutch pedal, RPM indicator lights, and optional Driving Force Shifter attachment will not function on the PS3.

Will the Driving Force wheels work on my PC?

Logitech Gaming Software (LGS) 8.70 or later must be installed on your computer for the G29 and G920 racing wheels to have full functionality. Once you’ve installed LGS, all buttons and accessories will function in the games that support them.

How long is the warranty?

Every Logitech Driving Force wheel comes with a two-year warranty.

The RPM lights don’t work. How do I fix them?

It’s possible there is nothing wrong with your Driving Force wheel. LED support must be provided by game developers, and not all games include this support.

I don’t have any force feedback.

Make sure that you’ve installed the latest version of Logitech Gaming Software (LGS). Both the G29 and G920 racing wheels require LGS to be installed on your PC for force feedback to function.

Confirm that the steering functions (including force feedback) are properly mapped in the game’s control options or settings, and in Logitech Gaming Software (where applicable).

I was able to get the force feedback to work, but it still cuts out.

Both the G29 and G920 racing wheels have dual motors that provide force feedback on supported games and systems. Both products contain an overheat protection circuit to safeguard them under high-temperature operating conditions.

In rare instances, force feedback features may shut down during use, while the controls continue to operate. If this happens, allow the wheel to cool down by using the following steps:

What games are compatible with the Logitech Driving Force Wheels?

You can see a complete list of compatible games here. Scroll down to the bottom of the page to view the handy chart provided by Logitech.

I still have more questions. Where can I go?