It’s a hot afternoon in the Twin Cities and the offices of VSI Labs are bustling. The team only has so much time before their upcoming cross-country trip in an autonomous test car. The company’s engineers and researchers are combing over every last detail before they depart for the Automated Drive West. Road trips are one thing, but traveling 2,000 miles in an autonomous vehicle is another ball game. VSI Founder and Principal Advisor, Phil Magney, who races Porsches in his spare time, ducks into his car to talk about the upcoming trip.

It’s the only quiet place he can find this particular afternoon.

“I just want to emphasize that we aren’t out to prove anything here, that’s not what we’re doing,” Magney said. “We’re researchers; it’s all about discovery, understanding the limits, and finding the gaps when it comes to automated driving.”

VSI will make the 2,000-mile journey from their Minneapolis, Minnesota home to Santa Clara, California for the Drive World conference starting on August 27th. The Automated Drive West will expose their test car, a 2018 Ford Fusion with a Dataspeed by-wire control system, to a variety of terrains and weather conditions. On the journey, the team will examine and evaluate things like precision lane models and advanced GPS technology. The goal being to improve the performance and safety of both systems as they relate to autonomous driving.

“We will be able to test some of the automated features in data collection environments that we’re not normally used to, like a lot of rural highways, mountainous areas, and tunnels and what not,” Magney explained. “The data will be tremendously useful because we can document precisely where the vehicle runs into trouble; we can replay these problem areas when we get back and apply more permanent fixes.”

Among the high-tech systems within the VSI test Fusion is a special Linux-based computer, custom-built by the engineering team. This computer is essentially the brain, acting as the central controller for the car’s on-board autonomous driving systems. As the test vehicle’s most vital organ, careful measures are being taken to protect it. “The computer gear we have in the trunk generates a lot of heat, so we are engineering a unique kind of adaptation of the HVAC system to provide proper cooling,” Magney said.

VSI Labs is an ambitious and robust company when it comes to automotive safety and technology research. The company builds vehicles to examine how different technologies interact with each other; and to better understand how they function when it comes to autonomous driving. VSI’s engineering team routinely analyzes by-wire control systems, sensor fusion applications, and precision localization; each important to the inner-workings of an autonomous vehicle. From there, VSI offers various research portals that support product and technology planning; competitive analysis and IP discovery; and product engineering and development.

Magney worked in automotive technology for 20 years, serving in senior leadership roles before starting VSI Labs in 2014. He describes the VSI approach as a decomposition of the ecosystem. The mindset allows Magney and his team to get a more accurate picture of autonomous vehicle technologies, their corresponding systems, and their overall capabilities.

“I felt that was going to be extremely important: to really understand the underpinnings of this technology,” he continued. “That really understanding, for example, the ecosystem according to sensors: so who makes these sensors? What are they used for? What do they look like and so forth. But it doesn’t stop there because there are a lot of components necessary to build up an active safety or automated driving system.”

From RC Cars To Real Ones

VSI today has examined thousands of products and represented over 800 companies, from Silicon Valley startups to multinational OEMs. Magney says things began humbly enough with “desk research,” but quickly evolved. “Within about a year and a half, we realized that to really understand this space we’ve got to go deeper and that means setting up a lab,” he recalled. “Honestly it started with building a 1/10 scale car, like an RC car, and automating that. Nearly right after, we ordered our first real vehicle. We used that to start building safety applications and lower-level automation features.”

We first met VSI Labs at AutoSens Detroit in May of last year. The team brought a Tesla from their Minneapolis office they routinely work on and benchmark. “We wanted to come to Detroit to show AutoSens attendees and delegates some of the new features we put in the car,” Magney told us when we met him. Later that day, we took a ride in their automated Tesla with Engineering Project Manager and chief driver Sara Sargent. “Safety is always the goal with this technology,” she said as we cruised across Warren Avenue in Detroit in autonomous mode.

“I always come at it from a safety background, so to me, the stuff we’re working on is as much about safety as it is automated driving,” Magney added. “I know it sounds like a cliché, but we believe everything we do helps advance that goal, that mission, or that trajectory of these technologies.”

Sargent will assume the same role when they depart the Twin Cites on August 20th for the Automated Drive West. She, like Magney, doesn’t get too carried away. This is more about hands-on science versus hands-off the steering wheel. “The Automated Drive West isn’t about reading emails, watching movies, or napping,” Sargent explained. “This trip will apply a few technologies that are particularly useful in rural settings where infrastructure is at a minimum.”

“To give you a little more background, we are using something called Real-Time Kinematics, often used in agriculture and in some marine applications,” Magney said. “It augments the accuracy by a great deal, so coupling that high-end GPS with our high-definition maps; those two working together will do most of the heavy lifting on the journey.”

During the Automated Drive West, VSI’s test Fusion will employ two important autonomous vehicle applications: adaptive cruise control and lane-keeping assist. Both will utilize data from high-definition maps and on-board sensors, supported by algorithms developed by the engineering team. Special scripts were then written so map data, relative to the vehicle’s location, can be downloaded at any given time. The adaptive cruise control and lane-keeping assist systems will adjust accordingly to any new map data while on the trip.

“What it boils down to is our GPS system in this car has accuracy down to a few centimeters rather than a few meters,” Magney explained. “In other words, we’ll be able to localize with precision using our high-end GPS.”

As the new map data arrives, the Fusion’s steering slowly transitions from the current path to the new one. Although not always necessary, the gradual transition allows the driver time to react should any errors occur in the loading of the new map. “One of the significant things about this test is that we can isolate the functionalities of these technologies,” Magney said. “A lot of times we will be tweaking the algorithms on the fly in order to make certain adjustments. And we always have a trained safety operator and driver behind the wheel.”

The Automated Drive West kicks off in Minneapolis on August 20th. The VSI team will drive four days to their destination in Santa Clara. On arrival, they will offer demo rides in the vehicle at Informa’s Drive World Conference & Expo from August 27th to the 29th. You can follow the journey in real-time on social media, either through the VSI Labs Twitter and/or Facebook page. The team plans on stopping at places like Mount Rushmore, The Great Salt Lake, and Olympic Valley.

“It’s going to be a terrific test of these systems because we’ll see so many unique environmental conditions along the way,” Magney said. “Of course, we will have live telemetry and other neat kinds of features so people can follow along with how we’re doing.” 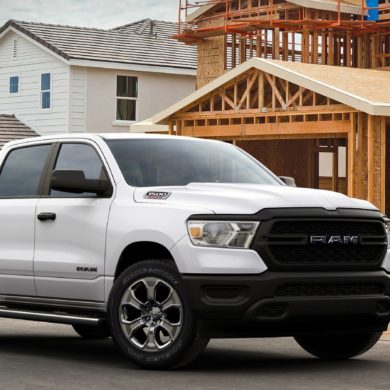