Automoblog’s Katie Kapro examines how imaginative thinking and creative risks have influenced the modern automobile in this three-part miniseries. Part one of this series here.

Every vehicle is made up of certain fundamental elements — the engine, tires, frame, and even a windshield if you want to get really fancy. These things are to a car what the eyes, ears, nose, and mouth are to the human face. They exist to serve a utilitarian purpose to be sure, but their variations from one “model” to another is the stuff of individuality and intrigue.

It’s what keeps the road, and the world, interesting.

Automotive styling over the years has taken some wild twists and turns. From the awkward, lady-only Dodges of the 1950s to the deja-vu inducing Chevrolets of the late 1990s, time has proven that some styling choices stand the test of time better than others.

There are three kinds of car: one built to be a utilitarian workhorse, one built for speed, and one built to be, for lack of a better word, sexy. Ford pretty much cornered the utilitarian market with the Model T tractor adaptation back in the day, while ever-increasing speed has been an aspiration of car manufacturers for as long as wheels have been attached to axles. In terms of design, the more utilitarian the vehicle, the chunkier its styling. The faster it needs to go, the lower, sleeker, and more reptilian it becomes. It’s the sexy cars though which historically get automotive marketers and stylists into trouble.

Essentially, the problem they’ve run into is one of poor assumptions. Trying to tap into a group identity is a challenging enough endeavor on its own, but when your audience is a giant swath of humanity, aka all drivers everywhere, the opportunity for falling flat on your face is pretty high.

Take for example the failure that was the Dodge La Femme. The automotive stylists of the 1950s created it thinking it would be a woman’s dream: Regal Orchid finish, loop pile carpeting, and of course built-in purses for those lady passengers who just never could remember to grab them when they ran to the grocery store for that gallon of milk they oh-so-absent-mindedly also forgot. Insert era-appropriate giggle and eyelash flutter. Trying to understand what women wanted in a vehicle was just too large a task for the time, and it’s not simply the fault of a few misguided designers.

The La Femme is representative of the times. Not only did chauvinism run rampant in the 50s, but the design engineers still had a lot to learn about customers. They had just begun to understand the importance of asking their target audience questions about what they wanted and taking their responses into consideration when styling the newest model. But what they had yet to figure out was how to translate that information and find the underlying desire and need behind their customer’s responses.

When a woman in the 50s said, I want a practical car, she meant a vehicle with a mechanically sound engine and reliable tires. Radial tires — tires with cords arranged in the direction of travel — were the newest rage and safety feature in USA-made cars of the era. A female driver in the 1950s wanted something to get her around safely. Not something to hold her makeup. If the car designers of the age hadn’t fallen prey to their own assumptions and really understood the underlying desires of their customers, they probably wouldn’t have made the mistake of creating a purse on wheels.

Tapping into the emotion that a car evokes, when done in just the right way, can be a powerful design tactic. It’s called the throwback. The Chevy Silverado, when launched in 1999, was a truck built for comfort and personal use. It was capable of hauling big loads and navigating rough terrain, but also had a cushy interior suitable for passengers and long trips. The Silverado was far from the first truck to try and meet the needs of comfort-seeking drivers. In fact, the first was Chevy’s Advance Design half-ton pickup, the first completely redesigned GM vehicle to hit the market after World War II.

Owners of pre-WWII pickups asked for a roomier, more comfortable cab. Not only did they get it, which of course led to increased truck sales for Chevrolet, but the style lines of models like the 1955 Task Force became synonymous with post-WWII prosperity, hard work, and security. It’s no coincidence the design of these particular trucks has made a comeback in the last several decades. The design of Chevy trucks has come to represent nostalgia for more prosperous times in the U.S. and our collective aspirations for the future.

In terms of design choices, the throwback works because it raises a vehicle to the emotional plane. Drivers inherently trust a vehicle that looks like a reliable truck of the past.

The final play in the vehicle design and styling game is to give drivers a car that feeds their desire for speed and imagination — aka every concept car ever. Speeding head-first into the future is as invigorating as it is inspiring, and as technology continues to advance, there are fewer limitations than ever before.

One might think the future dream machine is a driverless car, and perhaps it is for a certain segment of the population, but for people who truly love driving there’s no reason to be hemmed-in by gravity. Instead, they can set their sights on the sleekest and most aerodynamic vehicle of all: a flying car. There will be some kinks to work out before flying cars are commonplace — like figuring out how one goes about insuring a flying vehicle and how exactly to bring the price tag down from the multi-millions — but those logistics can be saved for another day. For now, a driver’s greatest dreams are often a reality thanks to today’s technology; all that’s left is to imagine zipping through the sky in a vehicle that would put even the sleekest sports car to shame.

Vehicle design is for the bold of spirit. It takes vision and creativity to reach into the emotional past and future for design inspiration. Not every attempt will be a success, but hey, it’s what keeps the road, and the world, interesting. 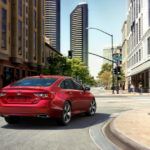 Next
2018 Honda Accord Gets Thorough Redesign