A Turbo Charged Day In Vegas With Exotics Racing!

I was probably going too fast. I was passing left and right, weaving through traffic, eyes forward looking for my cues. As fast as I was going the question remained: am I going fast enough? This day was destined to be a speed-filled one, and my racing began a little early as I was late for my shuttle to Exotics Racing. Of course, I was on the wrong side of the mammoth Wynn hotel in Las Vegas.

Even though it felt like my pace rivaled Usain Bolt, I was traveling at a small fraction of what I was about to experience.

I had the privilege of going to Exotics Racing to drive a McLaren 570S five laps around a custom track at Las Vegas Motor Speedway. This was absolutely thrilling, but also embarrassing. After my sprint through the Wynn hotel, my shuttle took me to Exotics Racing where I checked in. I was given a VIP bracelet – this was a pleasant surprise. They showed me to the VIP waiting room where celebrities like Harrison Ford and LeBron James hang out when they visit.

I spent very little time in the VIP room because there was a lineup of incredible cars I wanted to view, from Lamborghinis and Ferraris, to Porsches and Audis. These are supercars and the McLaren 570S was no exception. It boasted a 562 horsepower, twin turbo 3.8-liter V8. This car was by far the highest performance vehicle I had ever been in, let alone drove.

I was too excited, but alas, I had to wait.

After eye-guzzling these exotic cars, we were ushered off to watch a video on safety and expectations. We were given tips to improve our speed and what to expect. Afterwards we were driven around the track in a Porsche Cayman or “grocery getter” as our instructor called it. He pointed out the green cones meant speed up and the orange cones meant slow down. He drove very fast, which was thrilling and increased the anticipation of driving a higher performance vehicle.

Each corner showed that a grocery getter could handle high speeds, so driving a McLaren would be no problem.

We returned to the main area where I was given a helmet (provided at no charge) and introduced to my instructor, Buddy. Buddy was obviously a skilled driver, but it was his temperament that made him a great coach. He knew how to talk to people, especially people stressed out about testing their skills at unusual speeds.

When I entered the track I was timid, although Buddy assured me the McLaren could handle anything I was prepared to give it. The first corner was a sharp right angle turn that you wanted to enter hot because it fed into the long (quarter mile) straightaway, where you should reach your highest speed. I wasn’t very aggressive coming in, so when I accelerated down the straightaway I didn’t have enough momentum. I reached just over 100 mph.

Then the next corner, another sharp angle. I braked and banked through the turn. This car didn’t flinch. I certainly would have never taken that corner like that in my truck!

I felt like I was the slowest driver to ever get behind the wheel at Exotics Racing. This was still my first lap though. I was feeling the course out, learning my cues, and figuring out the car. I listened to Buddy as he instructed me. I traversed the next corner, then some elevation changes, banking into a turn which brought me back to the start with another chance at the straightaway. I accelerated into the turn, but was too narrow. This caused me to take my foot off the accelerator. Again, I hit about 100 mph.

I was slightly more aggressive as I negotiated the curves again.

Coming up on the straightaway once more, I hit the corner just right! Success! However, when I went to shift up, I turned on the windshield wipers! The car had paddle shifters positioned near the wiper switch and the blinker. Intending to shift, I blinked several times on accident, thwarting my attempt to reach a top speed. This was not only disappointing, but embarrassing. I figured Buddy found me to be pretty lame, but he assured me this was very common.

At least the windows were clean . . .

Next lap, I was determined to hit the corner hot and not wash the windows. My timing was the best so far and I reached 110 mph. That felt very fast, yet somehow disappointing. I knew there was more this car could do.

Final lap, my focus is good. I feel like I’m finally understanding my cues and I’m about to beat my best speed.

Buddy taps me suddenly and instructs me to stay right. Another driver in a Lamborghini is about to pass. This took away my momentum going into the straightaway and further embarrassed me, but I still returned the McLaren to over 100 mph as I accelerated through my last lap.

Buddy assured me my approach was appropriate, considering my level of experience and unfamiliarity with the track and car. I couldn’t help but think I could have gotten to 120 mph with one more lap – Buddy laughed and told me everybody wishes for more laps. I parked the car and took the obligatory selfies, then returned to the VIP room and waited for them to format my video (included as part of the VIP package).

A little later, I was shuttled back to my hotel, grinning from ear to ear as I relived my day of racing. The day started out racing, ended racing, and then my mind continued racing. Now I have the satisfaction of watching the video of my experience over and over.

We would recommend a day at Exotics Racing in Las Vegas – it’s an experience you will never forget. Group events, like corporate outings and bachelor parties are available. If you are looking to really enhance your skills behind the wheel, they even offer a driving school. 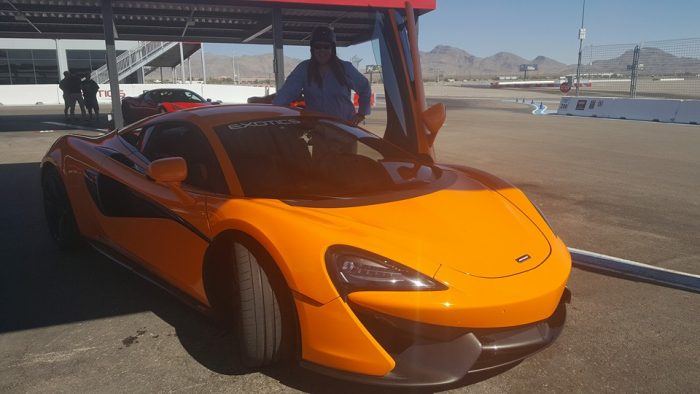