The winged and scooped Cougar Eliminator returned for 1970 in bright colors and with Boss 302, 351, and 428 CJ and Ram Air motors. This shot was taken on the high-speed oval at Dearborn Proving Ground during testing. Ford Motor Company

During the 1960s, the United States faced unprecedented change and cultural revolution. Ford Motor Company, one of America’s great manufacturing names, would also enter a period of significant change.

At the time, baby boomers were a driving force in the automotive industry.

And they were hungry for horsepower.

Ford Total Performance details Ford’s racing program from 1961 through 1971, from purpose-built race cars and production performance cars, to some of the most outstanding concepts. In the pages are the likes of the 427 Fairlane Thunderbolt, Mercury Comet, and other V-8 Falcons that competed in the 1963 and 1964 Monte Carlo Rallies.

And who could forget the Boss 302 and 429 Mustangs for drag racing?

Martyn L. Schorr has dedicated his life to performance cars, working with many top names in racing over the course of fifty years. He rode with Carroll Shelby and was at the press conference in New York for the Lola-built Ford GT that became the GT40. Schorr later drove the GT40 on streets of New York City and accompanied Mickey Thompson in 1969 to Bonneville, where a host of new records were set.

Schorr is also the author of Motion Performance.

The foreword is penned by Lee Holman, son of John Holman, President of Holman & Moody.

Ford Total Performance takes us back in time with unpublished period photographs and artwork from Ford designers. The book is revealing in a number of ways: it shows us not just automotive history but a cultural significance. It details not just where we have been but why we went there in the first place.

The pages capture an entire generation but in doing so, makes me wonder, in the next fifty years, if we will have a book of the same magnitude? And if so, what things would those pages say about our automobiles of today? Would they capture a culture as bold and brave as the one in Ford Total Performance?

Ford Total Performance is available through Amazon and Motorbooks. 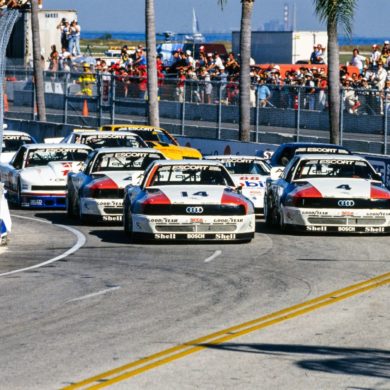